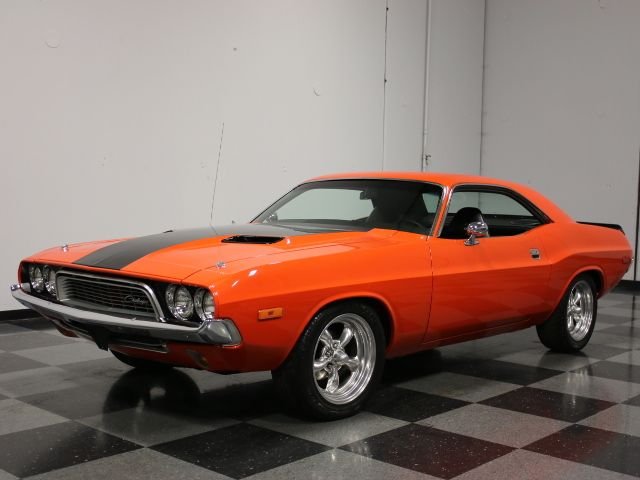 By 1974, the muscle car era was over, but someone forgot to give the news to the guys over at Dodge. Standing as the lowest production year for the E-body Challenger, this cool Hemi Orange hardtop sports a built 440 under the hood and a classic Mopar muscle look. If you wanted a new car with true performance DNA running through its veins, the Dodge Challenger was one of your only choices in 1974.

This cool Challenger was originally yellow with a black vinyl top, which was pure 1970s, but we like the Hemi Orange better, especially when it's this beautifully done. The Chrysler E-bodies seem to look best in high-visibility colors, which emphasize their classic long nose and short deck proportions, and when you hear this one run, the only possible color it could wear is that trademark bright orange. The later Challengers received cool details like the a performance hood with ram-air type scoops and a black stripe, a black Go-Wing out back, and a matching black tail panel with large rectangular taillights, tying them to the past but giving them a look all their own. Up front there's a revised grille with turned-down corners that ties it together with a secondary grille beneath the bumper. The chrome is extremely nice with no dings or dents in either of the bumpers, and the stainless trim running the length of the body is excellent.

Inside, the black vinyl bucket seat interior appears to be largely new stuff and it's in great shape showing almost no wear. Obviously things like the seat covers, door panels, and carpets are new, and the woodgrained applique on the console is still bright and clear. A full array of gauges temperature, voltage, oil pressure, and fuel level, and everything works as it should except the horn. There's a modern AM/FM/CD player driving a set of speakers on the rear package shelf, which seems to be the lone modification inside this Challenger. The trunk includes a new mat, and entire trunk compartment has been neatly finished with abrasion-resistant black paint so it'll always look great.

The biggest factory engine available in 1974 was a 360 cubic inch V8, but this one packs 440 cubic inches of Mopar that is obviously an easy swap. There's a new Edelbrock 4-barrel carburetor and high-rise intake manifold under a Mopar Performance air cleaner, which matches the beautiful finned valve covers. There appears to be a new alternator, fresh spark plug wires, and new components throughout the engine bay, suggesting that this one has enjoyed excellent maintenance, and it certainly runs well! The transmission is a Torqueflite 727 3-speed automatic driving an 8.75-inch rear with a limited-slip inside. The dual exhaust system sounds healthy without being overpowering, and terminates in correct polished rectangular tips under the rear valence panel. The finishing touch is a set of polished 17-inch wheels that look a lot like vintage Torque Thrusts, and they wear recent 255/45/17 Michelin radials.

Handsome, fast, and stylish, this Challenger is an excellent opportunity to pick up a recently restored car with all the looks of some of the most valuable muscle cars of all time for a fraction of the price. With a potent big block under the hood, it's plenty fast, too. Give us a call today! 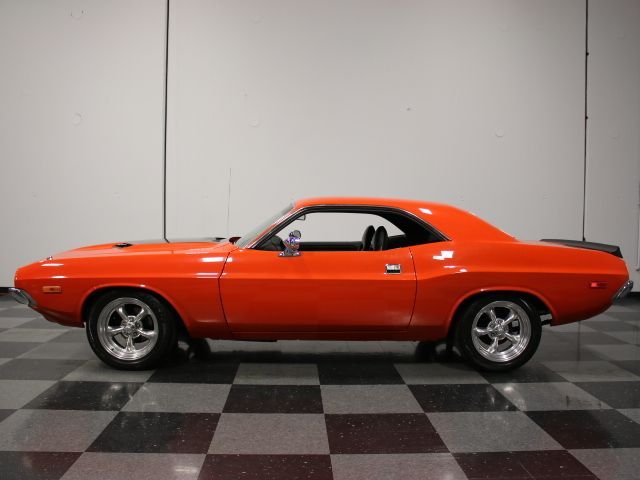