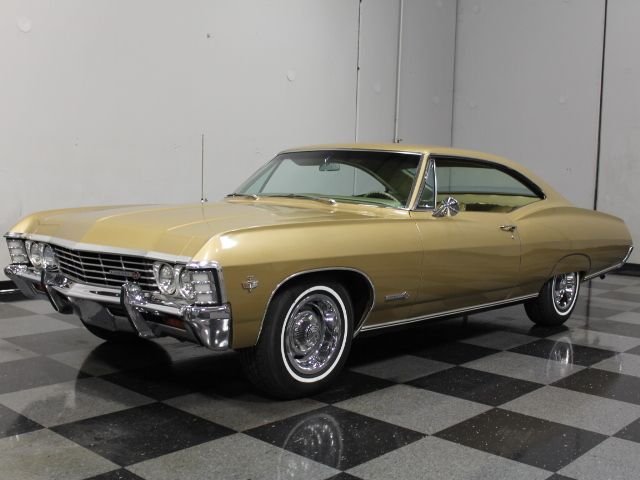 The 1967 Chevrolet Impala might have been the sleekest car on the road that year, offering dramatic fastback styling and slick fender skirts. This handsome full-sized SS delivers on its good looks, too, with a strong-running small block V8 and a luxurious interior that lives up to the Impala's "top of the line" position.

The paint is likely an older respray that's pretty close to the original code GG Granada Gold. It's got a decent shine and a bit of patina that seems to suit this car just fine. It's been touched up here and there and there are signs of age in the finish, but it's not crying out for a repaint. The bodywork underneath is nicely preserved, offering straight panels that reflect nicely and those dramatic creases in the fenders that give it the illusion of speed even when sitting still. Those might just be the biggest quarter panels ever created, yet they're crisp and straight and not rotted, which is a fate that befell many of this car's siblings. Plenty of shiny chrome is there to remind everyone that this is not a garden-variety Chevy and it still incorporates the Impala's traditional three-element taillights. There are subtle SS badges on the grille and deck lid, and this car comes by them honestly, as it is a real code 168 SS V8. But even without those little badges, this would be a car that earns respect on the street.

The attractive gold interior is nicely finished and offers a unique front bench that does its best to look like sporty buckets. It's quite likely that the interior is original, although things like the door panels look so good that maybe they've been replaced at some point, it's hard to tell. That's actually a good thing, because the whole car has an all-of-a-piece look and feel, so nothing stands out as too nice or too deteriorated. Big round gauges still show bright markings and needles and the SS steering wheel makes them easy to see. This car features factory A/C, a somewhat rare and desirable option, along with a factory radio in the center of the dash. The carpets are in excellent condition and aside from some minor discoloration, the back seat looks quite fresh. The trunk, as you'd expect, is truly massive and features the original mat as well as an ancient bias-ply spare tire that certainly dates back to the car's early days.

We have every reason to believe that the 327 cubic inch V8 under the hood is original to the car, although there's no proof. The date code falls within the right window of 1967 and it's dressed like it's been there for 45 years. There's bright Chevy Orange paint on the block that has probably been there from the beginning, along with a factory-style air cleaner and ram's horn exhaust manifolds. Power steering and power front disc brakes are mandatory on a car this size and it has a nice burble from the dual exhaust system. A TH400 3-speed automatic transmission was a good idea in a car with this much sheetmetal to haul around and the heavy-duty 12-bolt rear end doesn't even whimper when you mash the throttle. The underside is unrestored and a bit crusty, but there's really nothing to hide her and it does ride and track rather well. It's finished with a set of handsome Rally wheels and fat 235/75/15 Toyo whitewall radials all around.

Big and dramatic, this handsome Impala offers a lot of luxury/performance sheetmetal for the money. Call today! 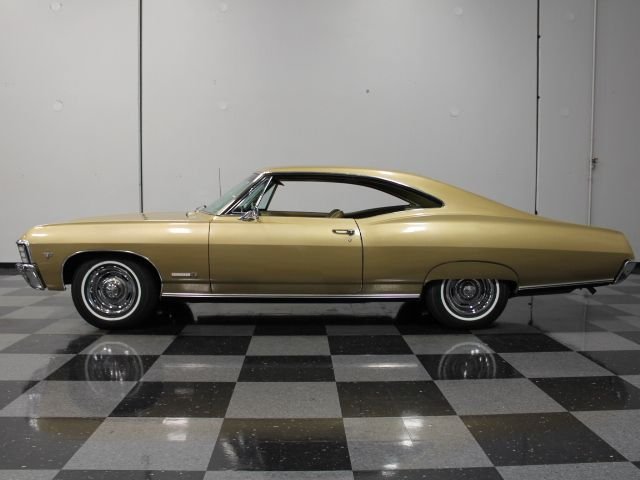