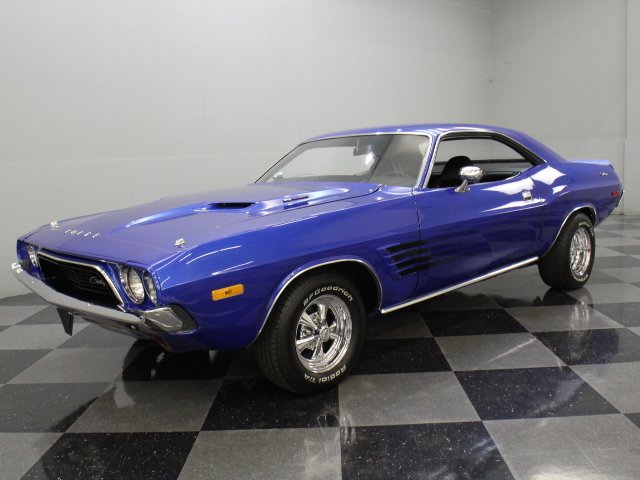 If you're a Mopar, there's almost nothing cooler than a '70s Challenger. This 1973 example packs a snarling 340 inch small block under the hood, which is now officially more powerful than anything the factory put together in 1973. Masterfully restored to be the ultimate street predator, there's no sneaking around, no hiding in plain sight, no catching people unaware with this one-if you drive this Challenger, you're hunting out in the open.

In 1973, the sheetmetal was still the same fantastic shape that makes people fall in love with the earlier models models. The bodywork on this one is incredibly straight, as it should be if you're going to paint it a color like the electric blue found here. Gaps are quite good given the car's mission and price, and the paint is simply amazing. Add in the slick decal on the doors and this is one is a visual knockout with enough aggression to leave no doubts in anyone's mind that it's a performance machine. Most of the trim is original and perhaps starting to show some age, and the blacked-out rear valence ties it all together. There's a subtle ducktail spoiler out back, but otherwise the sleek overall look maintains the purity of the original design.

Inside you've got black high-back buckets, a console, and a lot of new equipment. There weren't many cockpits of this era that were more handsome than the Challengers, and this one has been fully restored, and the black is a smart choice-too many cars came with white and they end up looking like candy stores. There's an original steering wheel and a full array of factory gauges that look kind of cool in their deep-dish pods. Upgrades include a tach mounted on the column, and a powerful AM/FM/CD stereo unit. Add one center console, a set of new door panels, and fresh carpet throughout, and you have an exceptionally clean, functional high-performance interior. In the trunk you'll discover a fresh mat and a full-sized spare locked down with a correct jack assembly.

In 1973, there were no big block Challengers, but with the recently overhauled 340 found here, you'll never miss the extra cubes. Covered in corporate Hemi Orange, the potent small block looks pretty stock aside from the Mopar Performance air cleaner and valve covers. Details are nicely done, from the color-matched inner fenders and firewall, to the original accessory drive with a chrome alternator. A set of beautifully made ceramic-coated long-tube headers feed a Flowmaster dual exhaust system with a fantastic voice. Underneath, there's a built 727 TorqueFlite 3-speed automatic that snaps through the gears with precision and the 4.10 gears on a limited slip mean that acceleration is RIGHT NOW ferocious. The final touch is a set of classic Cragar chrome wheels wearing 205/70/14 front and 245/60/14 rear BFGoodrich T/A radials.

Forget what you know about matching numbers, this car is a party on wheels. It sounds amazing and runs even better than it sounds, with effortless power at any speed, and acceleration that will bounce your head off the headrests. Fast, fun, and fairly priced, this is an awful lot of car for the money, so man up and call today! 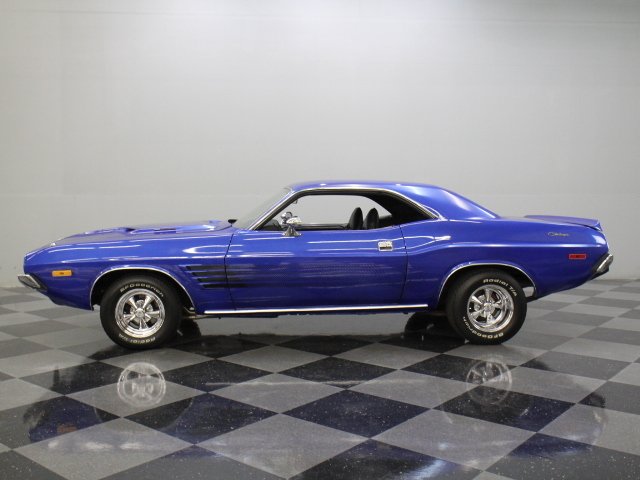