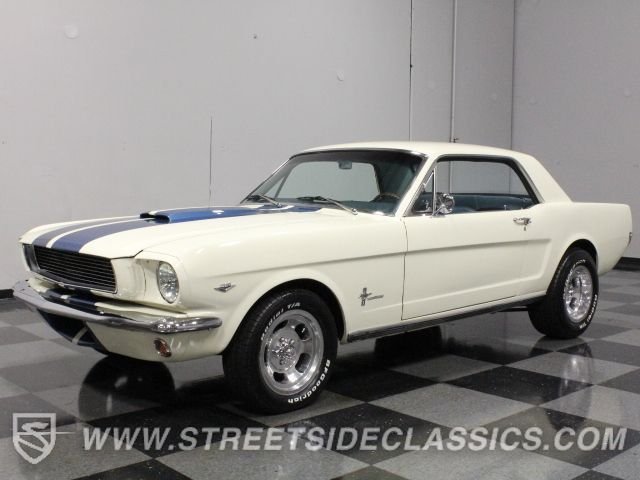 I know more than a few of you are looking at this 1966 Mustang coupe and saying, "Shelby never built a GT350 coupe!" Unfortunately, you'd only be half right. When Ford wanted to go racing in the SCCA's new "Sedan Racing" series (which would eventually become Trans Am), they called up their old buddy Carroll Shelby and had him build them a batch of racers. And since the traditional fastback didn't really seem like a sedan, they sent him coupes. The result was a small batch of Shelby-built notchback coupes that were extremely successful on the track during the 1966 and 1967 seasons, but they're all but forgotten in today's collector-driven world.

So no, this isn't a real Shelby, but it was built in the spirit of those pre-Trans Am racers: a Shelby-ized coupe that packs a potent small block inside a lightweight body. However, looking at this one, it has to be about fifty times nicer than those racers ever were, with nicely applied paint and stripes that look great and are probably are a lot brighter than anything Ol' Shel's guys were building for the track. Most of the Shelby design cues are part of the deal, including the Guardsman Blue stripes, a hood scoop, and a Shelby-style grille. It's all very nicely finished, with good panel fit, excellent paint, and a deep, lustrous shine. There's also a Shelby gas cap and GT 350 badge on the rear end, just in case anyone didn't recognize the Wimbledon White with blue stripes paint job.

The interior has been given a once-over to match the extroverted bodywork and paint. The original seats have been retained, and they now wear attractive two-tone covers that match the door panels. The original gauges are in decent shape and give you a comprehensive view of the engine through the spokes of a real wood-rimmed steering wheel that's quite similar to the units Shelby used. Forget a console, though, the Hurst shifter controlling the 4-speed underneath comes right up out of the transmission tunnel in true Shelby fashion. If the engine isn't entertaining enough, there's also a recent AM/FM stereo in the original radio's location and a properly finished trunk with a reproduction mat and spare wheel and tire combo.

The engine is a 289 cubic inch small block Ford that's been built for speed and reliability. Building on the original recipe, it adds a Holley 4-barrel carburetor, an Edelbrock intake manifold, and an MSD distributor, all of which add power without distracting from the period look. It's got an open-element air cleaner with a reproduction decal and the Cobra valve covers help with the Shelby image. Long-tube headers feed a Flowmaster exhaust system, so the sucker sounds plenty potent on the road, and there's a fat front sway bar that definitely nails down the handling. Four wheel disc brakes are a very smart upgrade on a car that moves like this and tall gears in the 9-inch rear end make it a blast on the street and happy on the highway. It rolls on a set of vintage polished kidney-bean mag wheels with recent BFGoodrich T/A radials.

Someone invested a bunch of time and money in this little white coupe, and built a car that's a nice tip of the hat to Shelby's work in the '60s. Fast, fun, and surprisingly comfortable, this is a coupe for all seasons, ready to have fun on the street or at the track. Call today! 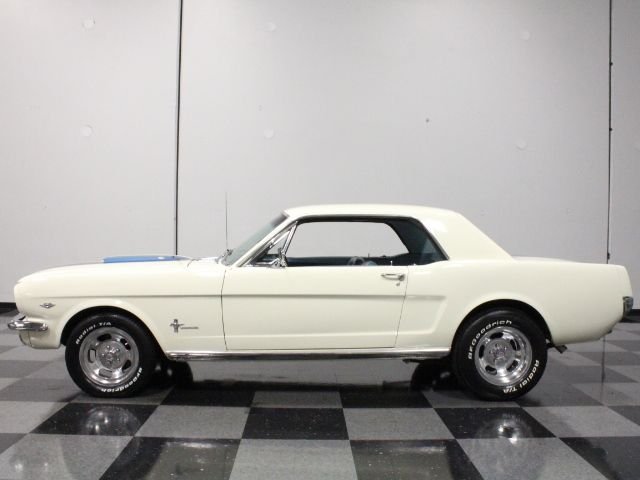