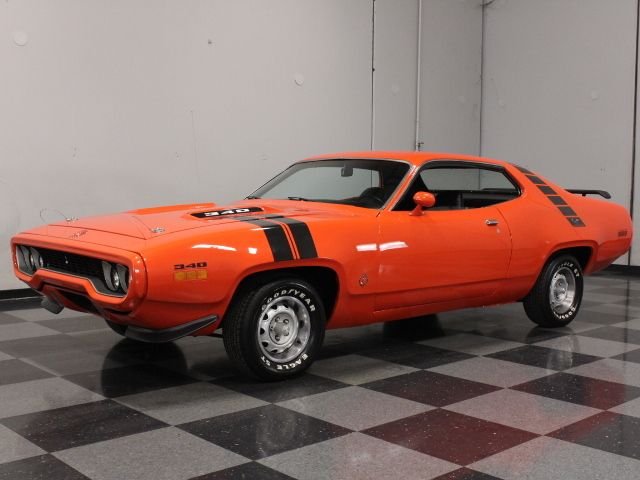 If it's visibility you crave, then you won't generate more burned retinas than with this vivid 1971 Plymouth Road Runner. Nicely finished with a devil-may-care attitude, it's also got a punchy 340 cubic inch small block to back up its outrageous looks and a fender tag loaded with options.

Mopar experts will quickly decode the fender tag and see that this one has been restored pretty much the way the factory built it, including the bright Tor-Red paint job, performance hood treatment, and black stripes. The all-new fuselage styling gave the Road Runner a big leg-up on the competition and the swoopy design definitely looks the part of a Mopar muscle car. The wrap-around bumpers that circle the front bumper and taillights were a defining feature, and painting them to match the bodywork gives this car a more modern and somehow more sinister look without erasing its identity. Fit and finish show some signs of use since it was done, but who can blame a guy for wanting to take this one out for a drive now and then? Details like the hood pins, dual racing mirrors, and twin chrome exhaust pipes were there from new, and the A45 Spoiler Package, which includes the split front spoiler and deck lid-mounted Go-Wing, only enhances what is already a fast-looking machine.

Shockingly, that two-tone black and orange interior is exactly how the factory did it, and it was surely a rare option. Bucket seats and a console are the only way to fly in this slick 'Bird, and the condition of the various interior components suggests that it was restored not very long ago and treated extremely well ever since. The instruments are likely original and in very good condition and the three-spoke steering wheel will be familiar to anyone who has driven a Mopar of the period. All the weather-stripping is new, so it seals up like a new car and thanks to the rounded styling, it is surprisingly quiet on the highway. Of course, the exhaust note is delightful, but just in case, there's also an AM/FM radio in place of the original Music Master AM unit. The trunk is finished just as nicely as the bodywork and includes a new mat and full-sized spare tire that's never been used.

The smart-running 340 cubic inch small block V8 is rated at a stout 275 horsepower and with only 1681 340 cars built, it's really quite rare. Without the weight of a big block and the all-new suspension underneath, the Road Runner is an awesome handler, so that's the way it went back together during the restoration. The engine bay is highly detailed, from a reproduction decal on the air cleaner to the Hemi Orange paint on the engine itself, to the little fasteners, clips, and hoses that make it look right. The list of new stuff is extensive, including the entire front suspension, steering gear, lines and hoses, master cylinder, gas tank, and reproduction dual exhaust system. The 727 TorqueFlite 3-speed automatic transmission and 8.75-inch rear end match the original specs and the floors are covered in a light dusting of undercoating material that looks right but doesn't hide any of the details. Correct 14-inch Rallye wheels wrapped in 245/60/14 Goodyear radials fill the bulging fenders just fine and improve handling in a noticeable way.

A rare, attractive, and downright fun car to own, this Road Runner is a high-visibility way to get some A-list Mopar Muscle in your garage. Call today! 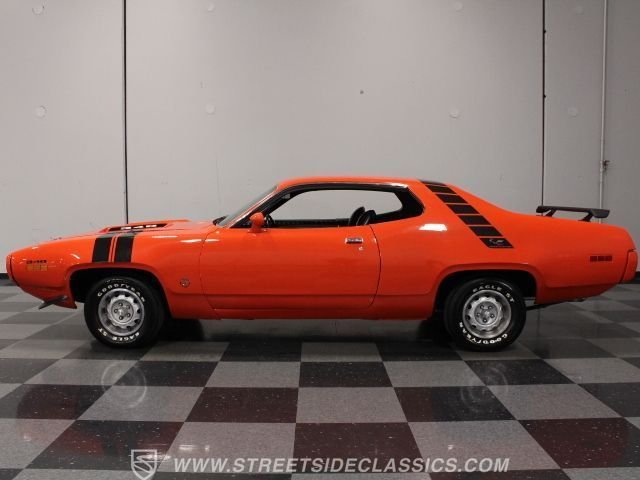