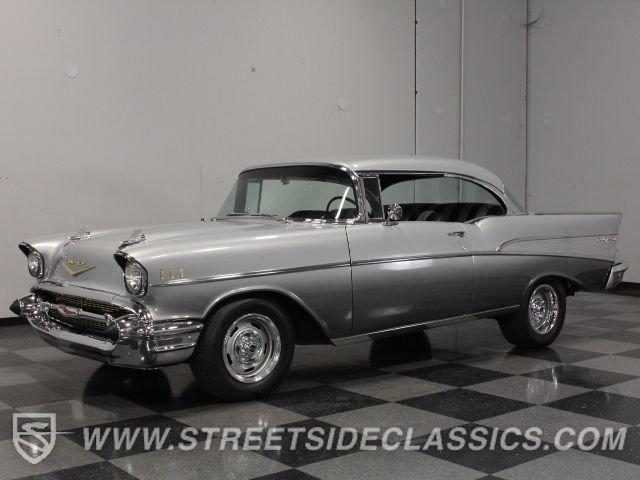 We talk about opportunities a lot in the old car world, but this '57 Chevy Bel Air hardtop certainly qualifies. It's a nicely-done older build that's showing its age, but if you look at the hardware, the overall look, and particularly the price, then you'll see that there's got to be some upside to putting this handsome bowtie in your garage.

You have to admit that the look is different but it totally works. Taking advantage of the Bel Air trim is a natural, but the monochromatic light and dark gray finish gives it an up-to-date look that isn't a rehash of the pastel '50s and that definitely makes this Chevy stand out in a crowd. The work was done back in the early 2000s and shows some signs of age, but looking past a few flaws you'll find good gaps, all the factory trim, and very straight sheetmetal. Nothing's been removed or shaved, so it has a look everyone agrees on. Someone obviously spend good money on the chrome and stainless, and aside from a few bumps and bruises on the bumpers, it remains intact, right down to the gold anodized grille up front, a Bel Air trademark.

OK, we'll admit that the striped interior isn't everyone's cup of tea, but you can't argue that it isn't distinctive and if you dig the look, there's a lot of other stuff to like inside. Bucket seats from a later GM coupe look right and are every bit as comfortable as the original bench, and the upholstery remains in very good condition. A custom center console was fabbed up and stuffed between the seats, and includes a matching armrest, 4-speed shifter, cup holders, and a quartet of gauges up front. Those gauges are in addition to the original dials up top, plus a Sun tach down in the "knee knocker" spot on the steering column. The original steering wheel is in good shape, complete with ornamental horn ring and the bright dash and door trim that defines the Bel Air remains in place. An aftermarket A/C system hangs under the dash on the passenger's side and there's a newer AM/FM/cassette stereo head unit in the dash, plus a CD changer hidden out of sight. The rear seat and trunk are both upholstered to match, and even if it's not quite to your liking, you know a ton of cash went into the build.

The engine is a 400 cubic inch small block, which makes big block power without the weight. Topped by a 4-barrel carburetor and open-element air cleaner, the engine bay is functional and gets all the important stuff right. Power brakes improve day-to-day drivability, while the 4-speed manual transmission makes it fun. A custom dual exhaust system barks out a fantastic soundtrack and the stock rear end still hangs on factory leaf springs out back. It's been driven and enjoyed, of course, but the hardware is in good order and ready to rock on a moment's notice. There's just a little bit of a rake to its stance, so it looks right, and the old-school Rally wheels wear spinners and staggered 215/70/15 front and 255/60/15 blackwalls for just the right look.

It's not a fresh build, but you can easily see how this car could go to the next level for not a lot of cash. 1957 Bel Air hardtops aren't often this affordable. Call today! 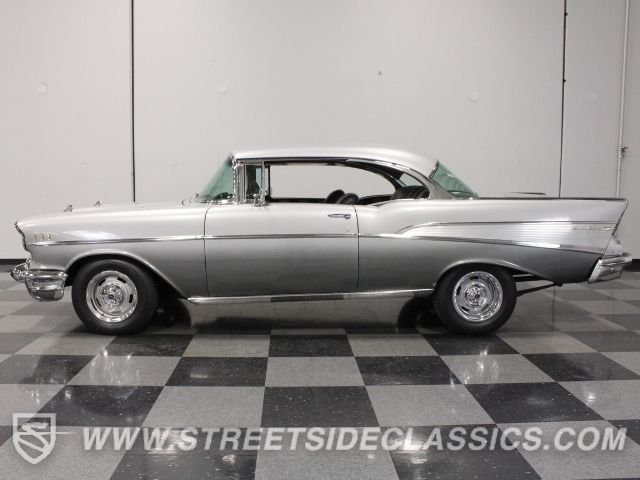