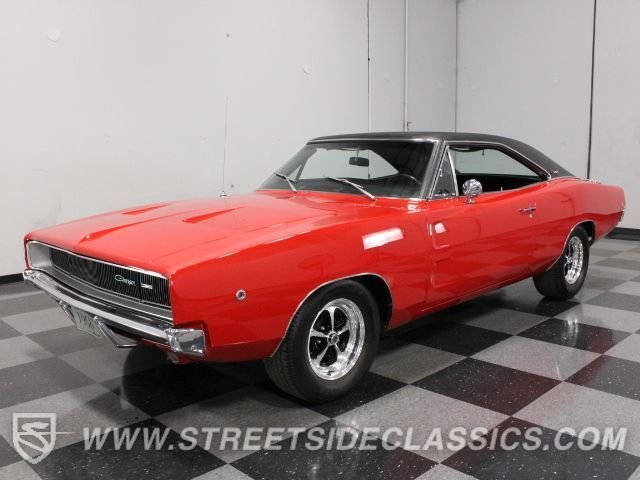 I don't think there are many who will argue that the 1968-1970 Dodge Charger isn't one of the most handsome muscle cars of all time. With chiseled flanks, that way-too-cool front end with the hidden headlamps, and those dramatic sail panels framing the rear window, it's like rolling testosterone. This 1968 Charger has been nicely restored and stuffed full of 440 inches of Mopar fury, so it's as formidable as it looks.

Someone spent a lot of time getting this car right, mostly because Chargers are now A-list celebrities and the only place beat-up ones are welcome are the on the "Dukes of Hazzard" set. Someone spent hours and hours getting it straight and aligned right before a drop of that bright red paint was applied, and the finish suggests that there was a lot of effort invested in the final result. The paint itself is two-stage urethane, which will look this awesome practically forever with just a modicum of maintenance, and the blacked out grille gives it just the right amount of aggression without being overbearing. The black vinyl top is new and looks awesome just the way it is. The grille is in great condition, and who doesn't love those four individual taillights out back looking like the exhaust ports from a fighter jet.

Done to OEM standards using correct materials and patterns, the black bucket seats look factory fresh. Those splits in the seat covers were more style than comfort in 1968, but who can argue with how cool it looks? With a slick center console and cool chrome shifter that's pure Mopar, it's a gentleman's hot rod that is luxury car comfortable inside and brutal performance under the hood. The original Music Master AM radio still lives in the dash, but a newer AM/FM/CD stereo was cleverly mounted down low, right alongside an aftermarket tachometer. The gauges appear to be original and I can think of few better places to conduct the serious business of driving than the cockpit of an early Charger. The trunk is nicely finished with black carpets and a space-saver spare with jack assembly.

This big red Charger is powered by a 440 cubic inch V8. Yes, it's true, this car originally packed a wheezing 318, but that's part of the appeal of these cars-big power upgrades were just a check mark away on the original order form and it's incredibly easy to add horsepower during a restoration. Hemi Orange dominates the engine bay, but it wears a factory air cleaner atop an Edelbrock intake and long-tube headers provide deep breathing for the big block. A 727 TorqueFlite 3-speed automatic transmission handles the gear swaps, feeding a Chrysler 8.75-inch rear hanging on original leaf springs. The floors and subframes appear to be wearing original undercoating, and it's in remarkably good shape for its age. A recent dual exhaust system sounds amazing and fits snugly under the car, and terminates in correct polished tips below the rear bumper. Four gorgeous chrome Magnum wheels wear recent radials, so it rides and handles like a much younger vehicle.

It's rare for Chargers this nice to remain on the market for long. There's always a long waiting list of guys hungry to add one of these to their collection. With an original window sticker and Chrysler Corporation Broadcast Sheet, it's also nicely documented, so don't delay, call now! 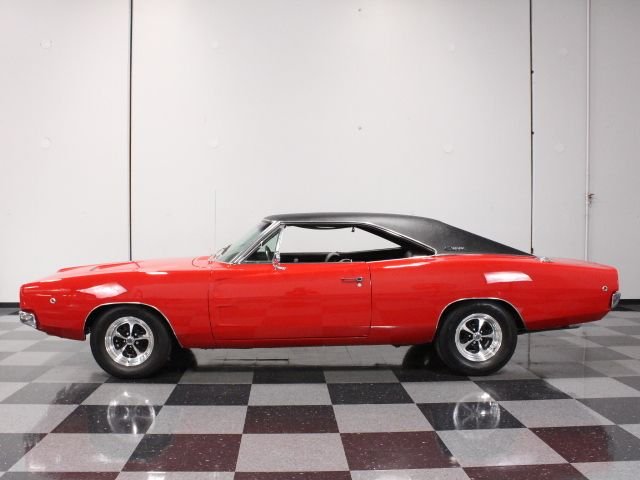