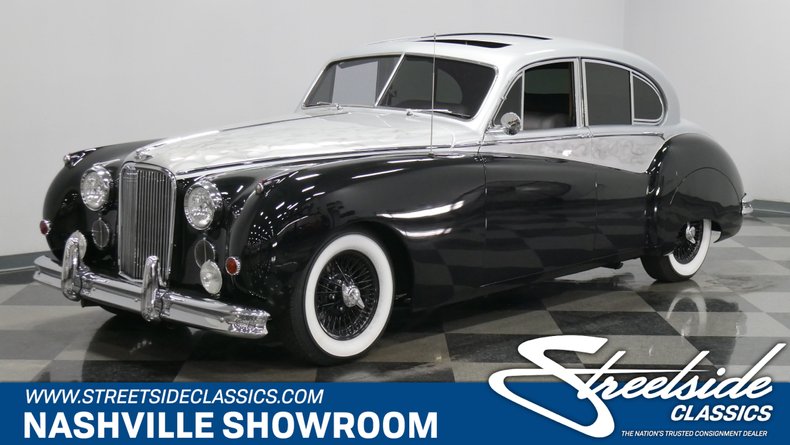 This 1956 Jaguar Mark VII M was unquestionably one of the finest cars in the world when it was built, and today it still puts many luxury machines to shame. With an old-world presence that's been enhanced by a stunning bespoke restoration, this build has managed to do the impossible by combining elegant British luxury with custom, restomod touches. And it all works in perfect concert to result in one of the coolest cars we've ever featured at Streetside Classics.

When you show up in this car, there's no question what it is, and even someone who's never seen Coventry's own classic Jaguar before will innately recognize that this is an important car with an important person inside. The two-tone color combination is full-custom and professionally executed, featuring a nice metallic flake in the deep black bottom half, and custom ghost flames that adorn the slick silver top and flanks. Jaguars were never this flashy from the factory of course, but this show-stopping finish really highlights the most interesting aspects of the car quite nicely, particularly that long hood, sweeping front fenders, and rounded rear quarters adorned with fender skirts. The paint job was done in 2012 when the entire vehicle was restored, and because a mere 500 miles have been driven on the car since, it has lost none of the hand-crafted details that make this custom Jag so special. It's unlikely you'll ever see another one at a red light, and even at shows, this car will draw a crowd because everyone loves that towering grille and familiar Jaguar hood ornament. And speaking of the grille, it shines up beautifully and because this is a Mark VII M (1954-1956 only), the auxiliary head lamps are mounted to the front bumper and there are circular grille covers over the front horns. There's enough beautiful chrome and brightwork on the rest of the car to make it look very substantial indeed, and a sunroof was added as yet another modern touch that sets this car apart from the crowd.

Inside, the opulent black and gray leather upholstery is every bit as elegant as you would hope in a car like this, albeit a tad dated compared to newer Jags. For some, the interior may seem out of character, but it's actually a very popular choice, hearkening back to the days of early coachbuilding where the driver would get dark leather seats to protect against stains. The front bucket seats show very minor wear, while the rear seat, headliner, door panels, and plush black carpets still look new and provide an added level of royal comfort. That's real burled wood trim on the doors, seat backs and trays, instrument panel, and dash, and while it shows some signs of age, it also has a wonderful, warm patina that would be a shame to erase. A centrally-mounted custom gauge panel is full off Phantom white-face gauges, switches, and A/C controls, and vents for the A/C were neatly installed below and they blow R134a-powered cold air. The door panels and handles are pieces that feel expensive and when it's closed up, the interior is as quiet as a tomb, which helps tremendously when pumping tunes through the Pioneer AM/FM/CD head unit that's been neatly hidden away in the glove compartment. A B&M shifter splits the buckets and controls the TH350 3-speed automatic transmission below, the foot-print gas-pedal is a fun "classy-trashy" addition, and the 4-spoke Jaguar steering wheel reminds you very quickly that this is still a fine piece of machinery, even though it may not take itself too seriously anymore. Rear seat passengers are treated to wood fold-down tables and there's a well-shaped, spacious trunk with that's fully finished and adorned with Jaguar script.

Originally fitted with a DOHC Inline-6, the restorers of this fine automobile immediately knew that an upgrade in power was needed in order to quickly move all that substantial British steel. A reliable 350 V8 was swapped in, and then topped with a Weiand intake and Edelbrock 4-barrel carburetor for added reliability. An MSD distributor helps the small block immediately snap to attention with a flick of the key, and a giant aluminum radiator keeps the whole show nice and cool. The presentation under the hood was not an afterthought either, but rather a focal point, evidence by the smoothed firewall, organized hoses and wires, finned valve covers and chrome open-element air cleaner. And with only 502 miles on the build, everything is still incredibly clean and tidy in the engine bay. To handle the extra power a TH350 3-speed automatic was added during the build as well, and it spins a GM 10-bolt rear end, meaning driving this Jag on long cruises is exactly what it's been built for. Power steering and power disc brakes allows for laid-back cruises, and the dual exhaust with Glasspack-style mufflers provides the throaty soundtrack. Black wire wheels with Jaguar spinners finish the look, and they're wrapped in 205/75/15 whitewall tires for a killer look.

With only 502 miles on the custom build, this one-off 1956 Mark VII M is a truly special car. It's not often that bold styling changes can upgrade an already amazing factory vehicle, but we think that's exactly what's been pulled off with this awesome car. Call today! 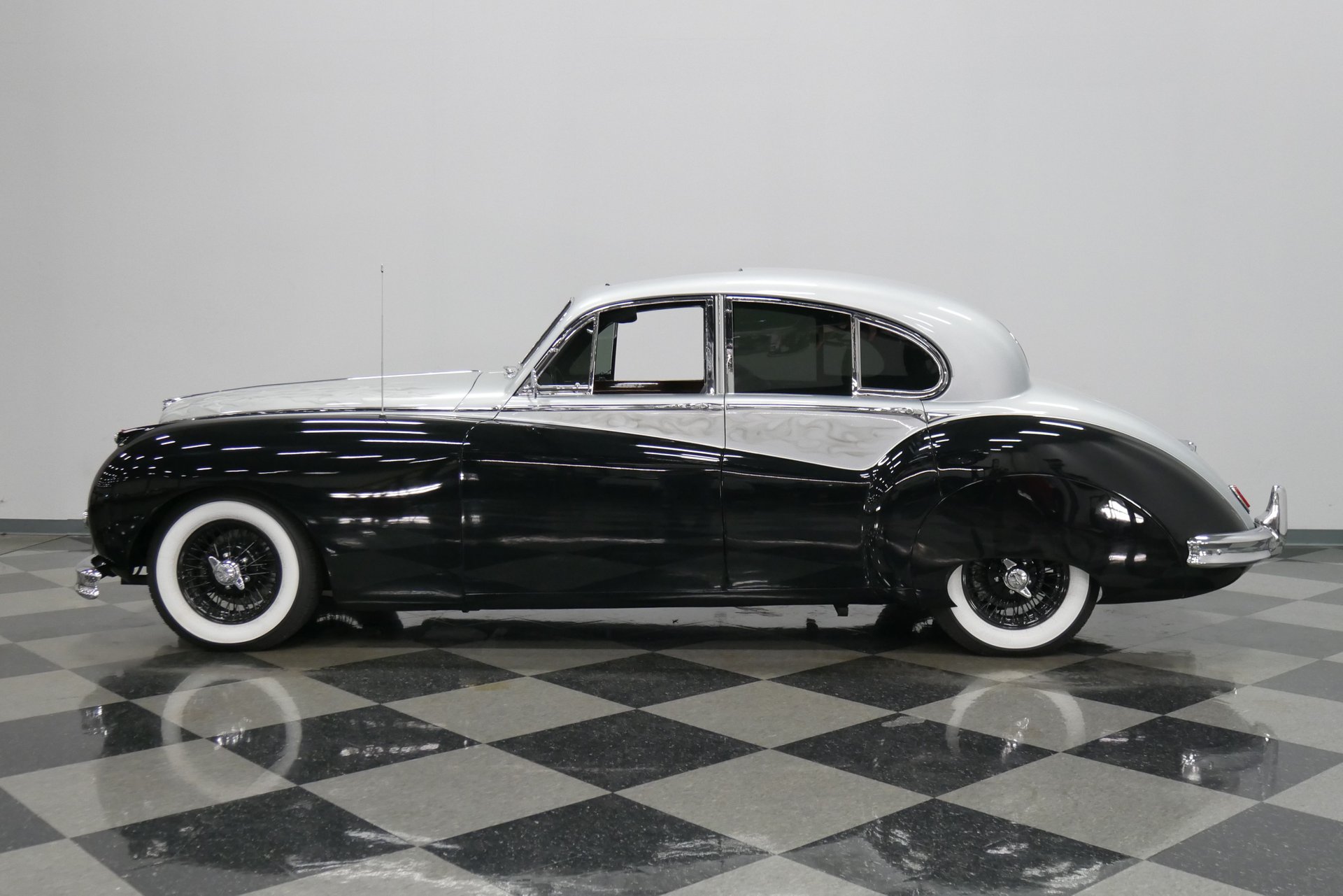