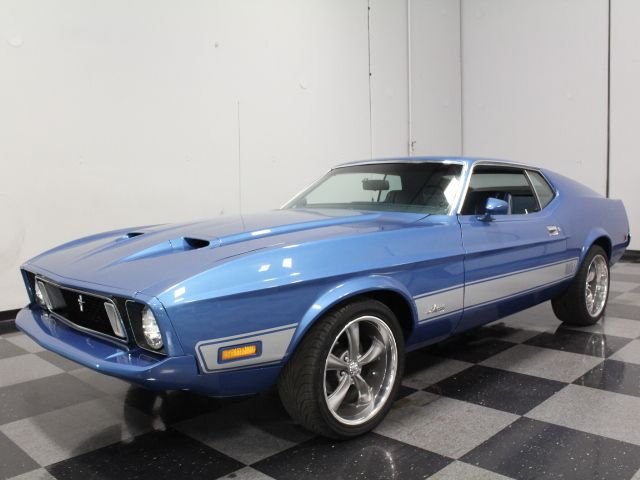 This 1973 Mustang Mach 1 resto-mod is every bit as nice in person as it is in photos. A true H-Code, it's dressed in full Mach 1 regalia, it's a cool combination of arguably one of the best-looking Mustangs of all time and a few tricks that give it modern performance to match.

Sure, the flatback styling was controversial, but the overall look has aged quite well, especially when it's done up this nicely. There's no arguing that this car doesn't look fast, and the bright blue paint looks right on the vintage pony's sheetmetal, augmented by just enough metallic to make it sparkle in the sun. The bodywork is quite nicely done, with sharp creases in the factory panels, good alignment on the doors and hood, and a surprisingly good fit for the urethane front end components, which never fit right from the factory. Mach 1 graphics were added along the flanks and on the rear panel, but otherwise this car is pleasantly devoid of addons like a chin spoiler or rear wing, instead letting the muscular shape speak for itself. The front bumper is an original urethane unit, while out back there's still a chrome unit that wraps neatly around the tail panel and frames the three-element taillights.

The cool interior really doesn't need modification, given the stylish high-back bucket seats and deep-dish gauge pods in the dash. The fat wood steering wheel is a handsome upgrade over the original thin plastic piece, and it even works well with the wood appliques on the dash and door panels. The seats show almost zero wear on their new covers, and fresh carpets were installed just recently. A fold-down rear seat makes for cavernous trunk space, one of the fastback's many virtues. The center console houses the ventilation controls, with the original AM/FM radio fitted just above. All the gauges are fully functional, including the auxiliary gauges in the center stack, and their crisp markings and clear lenses suggest that they have been rebuilt in the not-too-distant past.

The engine is a great-running 351 cubic inch V8, which was the top motor in 1973. In H-code trim it made 154 horsepower, but thanks to an upgraded intake manifold and Edelbrock 4-barrel carburetor, it's substantially more powerful today. It's linked to a rugged C6 3-speed automatic transmission and a 9-inch rear end, making for a virtually bulletproof driveline that will last practically forever. The engine bay is neatly finished, with bright Ford Blue on the block, a chrome air cleaner with correct decals, and completely rust-free inner fenders and firewall. Long-tube headers lead to a true dual exhaust system with crossover and polished tips, so it looks as awesome as it sounds, and the chassis is as clean as you'd expect from a car living down south. Big 18-inch wheels echo the vintage Torque Thrusts, and wear 245/40/18 front and 275/35/18 rear performance radials.

This great-looking Mach 1 offers a traditional Mach 1 performance look, with a few twists to create something truly special. Call today! 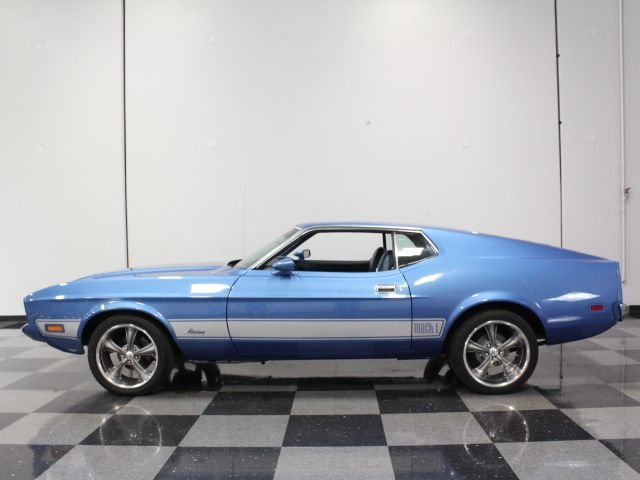