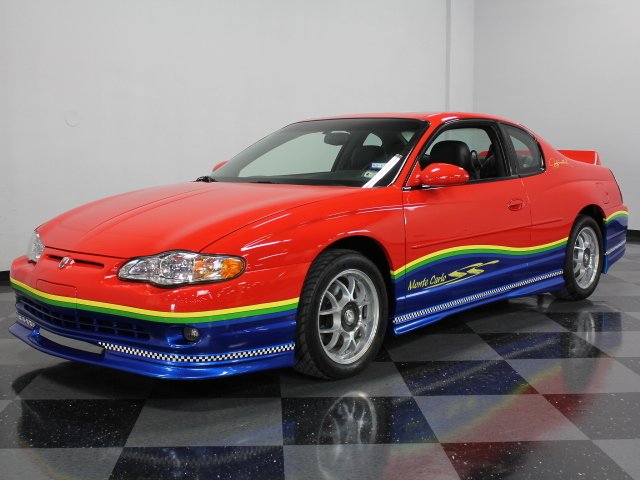 If you're going to own a limited-edition Monte Carlo, you may as well get one designed, built, and sold by the guy whose name is on it. This 2000 Chevrolet Monte Carlo is more than just a car, it's a remarkable piece of NASCAR memorabilia that's part of a very exclusive club.

Designed and built by Jeff Gordon Chevrolet in Wilmington, North Carolina, there were only 24 of these spectacular Monte Carlos built. What's more, you needed to pony up $5000 cash just to reserve your spot in line, and all 24 spots were sold within minutes. This particular example, serial number 2, has had just one owner and shows just 3541 original miles. It remains in showroom-fresh condition in every measurable way, with vivid paint and graphics and unmarked ground effects that were all part of the package. Obviously built to emulate the NASCAR racers you watch each week on TV, it goes beyond mere graphics and actually shows a complete re-engineering of the Monte Carlo's shape, including a front air dam with driving lights, side skirts, and a deeper rear valence and tall rear wing that probably look familiar to a lot of NASCAR racers out there. Details include a Jeff Gordon signature, custom Monte Carlo SS graphics on the doors, and a big #24 on the sunroof. How cool is that?

Inside the package sticks to the factory recipe, why mess with a good thing? The power leather buckets are enhanced by custom embroidery on their faces commemorating these special Monte Carlos, and the surfaces in this one look virtually new. Red leather accents on the steering wheel and shifter, and there's a custom brass plaque on the dashboard that identifies this as #2 of 24 Jeff Gordon special edition Monte Carlos built. It's also loaded with every option Chevrolet could build into a Monte Carlo that year, including A/C, power windows and locks, tilt wheel, a sunroof, and a powerful AM/FM/cassette/CD stereo system. And the Jeff Gordon Monte Carlo was more than just a cool car, it also included a matching numbered leather jacket, and a custom car cover. This particular car also includes the original (and only) owner taking delivery from Jeff Gordon himself. If you're looking for air-tight authenticity, this car has it!

The Monte Carlo was no slouch in the performance department with a 3.8 liter V6 making 200 horsepower. Actually, this Jeff Gordon special probably makes a bit more thanks to a reprogrammed engine management system, a high-flow dual tuned exhaust system, and a performance air intake system. The engine bay is beautifully maintained and completely untouched, including belts and hoses, making this the ultimate collector's time capsule. The 4-speed automatic overdrive transmission, 4-wheel disc brakes, and fully independent suspension remain in place an unmodified, although the car did also receive a custom set of 17-inch American Racing wheels wearing high-performance Goodyear Eagle GS-C radials.

For NASCAR fans, this might be the ultimate collectable. Fully documented and incredibly rare, it's a screaming bargain at 60% of its original $49,500 sticker price. Call today! 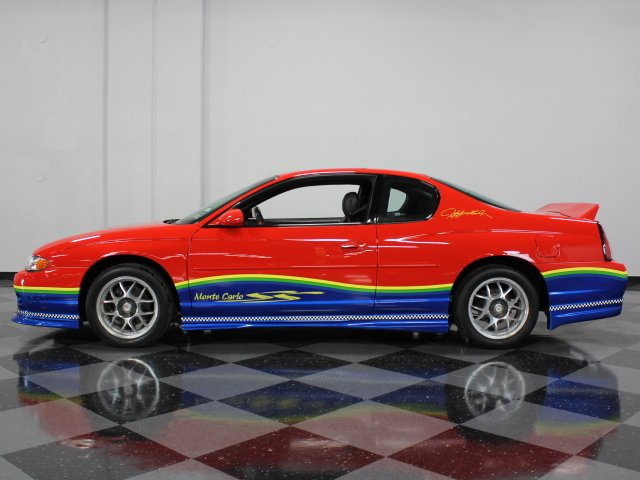