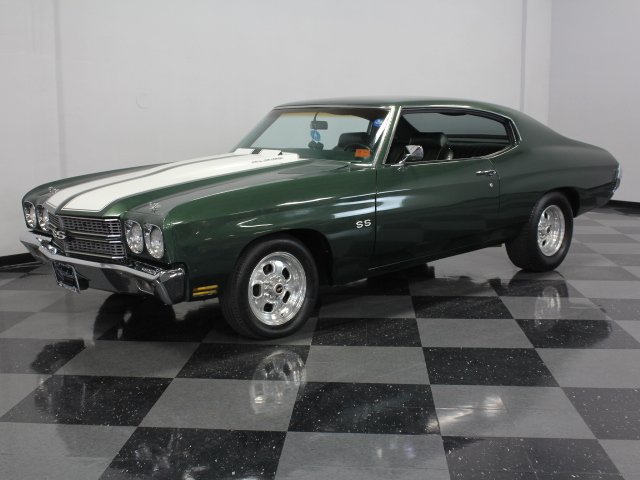 When I was racing Corvettes, we had a saying: "I can get my small block car around the track faster than your big block car." What that means is that it would be a mistake to underestimate this 1970 Chevelle SS tribute car on the basis of the small block under the hood. With a wicked attitude and a setup that's built solely to go fast, this is one heck of an entertaining car to drive.

You just don't see a lot of Forest Green Chevelles, but it sure looks great, doesn't it? Perhaps it's the combination of the paint's grown-up, subtle look and the brute-force power that lives underneath, but this car has an awesome look. It's also worth noting that code 48 Forest Green is this car's original color, so it has that going for it. The bodywork was restored in the early 2000s and it's been driven since then, so it's not perfect, but if you want a car that can cruise the streets and not humiliate itself at the strip, then this is a fantastic choice. We don't believe it's a real SS, but the white SS stripes, functional cowl-induction hood, and SS badging make for a convincing facsimile that will be respected everywhere it goes. Nice chrome and stainless looks great against the dark green paint, too.

The dark green bucket seat interior is impressively appointed and gives the Chevelle a unique look that stands out among all the other cars with their plain black upholstery. It is this car's original color inside, too, so all the ancillary parts, including the steering wheel and center console, are properly colored and look great. Like any proper track car, it has a full set of Auto Meter gauges hanging under the dash, plus a big Mallory tachometer hidden down low and out of sight. There's also our favorite horseshoe shifter for the TH350 3-speed automatic and an AM/FM/cassette stereo radio for those times when you're just cruising. It's all quite nicely preserved and in very good condition, including a rear bench seat that looks like it's never been used. The trunk isn't detailed, but does have a correct mat, space-saver spare tire and a jack, and you could easily clean it up for show if that's your predilection.

Now about that gnarly small block. It's a 1974-era 350 but it's been built to take no prisoners. There are 11.0:1 slugs in the cylinders, a set of ported double-hump heads, a big, lumpy cam, and roller rockers to help build horsepower, while a high-volume oil pump keeps it all protected. A gear drive for the cam makes that awesome (and intimidating) sound that'll make folks look twice before having a go and it's fed by an Edelbrock intake. The engine bay clearly had some money spent on it, with bright Chevy orange paint and a few dress-up items, and you'll never think twice about popping the hood and showing it off. The aforementioned TH350 transmission has a 3100 RPM stall torque converter and a manual valve body and the bulletproof 12-bolt out back is filled with 4.10 gears on a Posi. Air shocks in back help fine-tune the ride and long-tube headers give this over-achieving small block a pretty stout torque curve. Classic Weld wheels with staggered 195/65/15 front and 275/60/15 radials give it the perfect racer look.

If going fast is your thing, don't overlook the virtues of this small block Chevelle. You'll probably be surprised by how little it gives up to its bigger siblings. Call today! 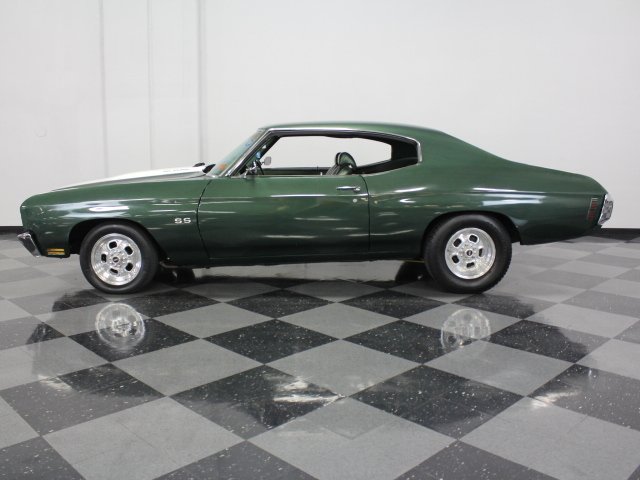