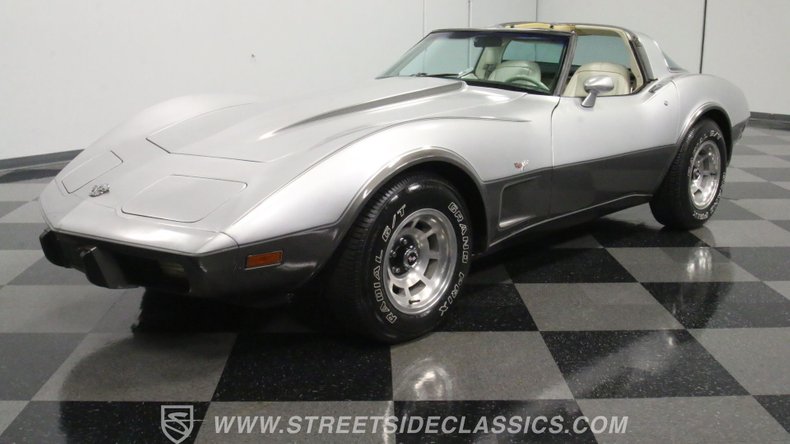 Released to commemorate the quarter century legacy of inspired driving provided by Chevy's true American sports car, this 1978 Chevrolet Corvette 25th Anniversary Edition greets the present in its original condition not only inside and out, but under the hood as well. Despite its more than 40 years of service, it's running great and ready to hit the road just as soon as you get it home. This is a sharp, appealing classic in its present form and just a little TLC is all that would be needed to take it to a whole new level.

The distinctive two-tone color configuration this commemorative '78 wears pays visual homage to its Mako Shark II concept car inspiration, reversing the positions of that pivotal car's dark gray and silver colors. There's no doubt that this classic will attract plenty of attention just as it is - and certainly it offers just the road ready mechanical condition to hit the asphalt without delay - but some well-placed attention will definitely yield aesthetic dividends. There are no serious blemishes to contend with, but the exterior could use some refinement to regain its full shine. The flowing fenders and futuristic profile that set its third generation form apart from previous editions are still well aligned and the retractable headlights, a defining feature of this model, sit flush against the lengthy hood and raise without issue. The T-Top configuration provides a quick and easy conversion from open air motoring to a more sheltered environment in just a couple of quick steps.

While you can see some signs of the passing years here and there on the surfaces of the distinctive oyster-colored leather interior - this car is more than four decades old, after all - overall, it's in solid shape and still retains its factory configuration. The buckets are still plenty comfortable and the door panels show less wear and discoloration than you'd expect for a car of this age. The leather-wrapped factory steering wheel sits on top of a tilting/telescoping column, so you'll have no problem getting into that perfect driving position, while just beyond it, the dash area looks fresh, with its comprehensive assortment of functional gauges extending from instrument cluster to the center of the dash behind clear, readable lenses. A simple coolant recharging is likely all that will be needed to get this classic Chevy's air conditioning system back to top form - all of its components are securely in place and it blows with conviction but not quite as cold as you might like. Additional comfort features include power door locks and windows, a rear window defogger and an AM/FM/Cassette stereo.

The 350 cubic inch V8 beneath the sweeping hood is almost certainly original and, due in part to its unusually light usage, is running nice and strong. It's armed by a 4-barrel carb and is at the center of a well-maintained engine compartment that's still in its original configuration, down to the properly painted air cleaner and induction system extending forward. Just behind it is a 3-speed automatic transmission that shifts with slip-free precision. Smooth power steering combines with the Corvette's low, road-hugging stance and independent suspension at both ends to provide agile handling, while power brakes at all four corners bring this relatively lightweight car to a stop very quickly. The set of 15" cast aluminum Corvette wheels outfitted with Grand Prix Radial G/T tires provide just the right finishing touch.

Special edition Corvettes are hard to come by to begin with, and the reassuringly solid condition of this 1978 Chevrolet Corvette 25th Anniversary Edition makes for a compelling opportunity. Call today! 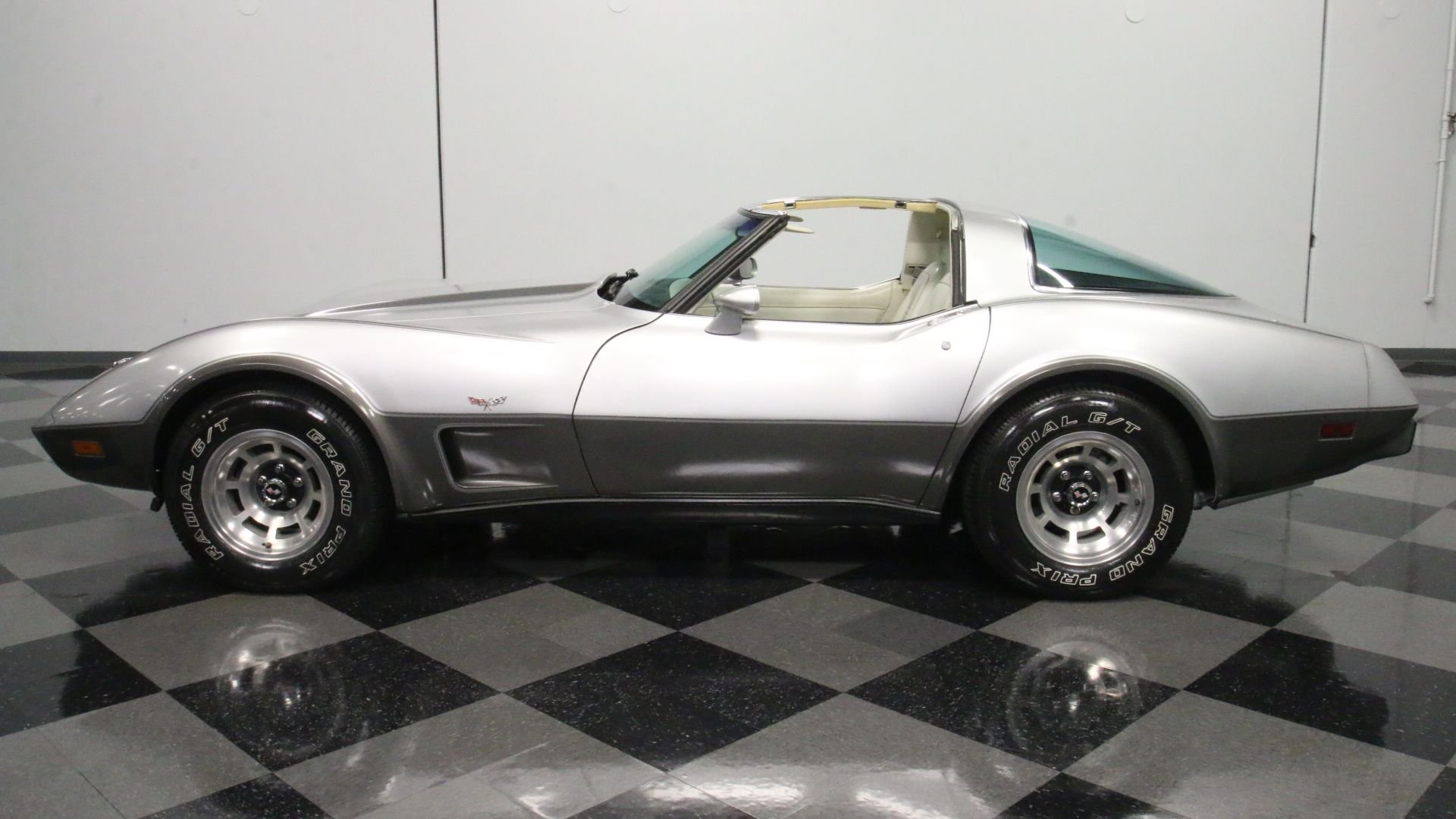