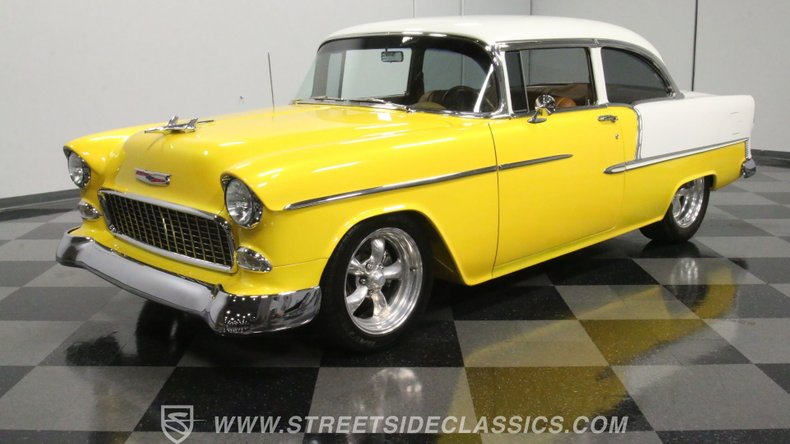 The singular presence and curb appeal of one of America's most beloved classics, mixed with the functionality and outstanding street manners that come via an array of added top tier components. That's the compelling opportunity offered by this 1955 Chevrolet Bel Air Restomod. It's logged fewer than 1k miles since its build - just enough to get things dialed in - and is propelled by a sizable, rumbling big block beneath its hood.

Evidence that this Chevy emerged from a high-end, meticulous build is everywhere. It wears vibrant yellow pearl over its exterior and is a world-class head turner - the eye-catching paint is nice and slick and has just the right amount of pearl texture added to the mix, so it positively radiates when exposed to the sun. Outfitted with a fully custom chassis, it has a great stance - lowered just enough for an aggressive appearance while still leaving enough wheel clearance for driving in everyday situations. The white hue draped over the roof, deck lid and top portions of the fenders provides the perfect accenting, and the collection of chrome is in top notch condition - just check out that rocket-shaped hood ornament pointing the way forward. Smoothed and tucked bumpers at both ends add a tasteful touch of customization, bracketing a body that shows precise exterior alignment, with tight, even gaps surrounding its panels.

The distinctive, fully custom palomino interior was professionally configured and installed and the skilled workmanship and high-end components on display really make an impact. There's a pair of nicely contoured, late model power bucket seats up front and a matching bench seat in back that wear impeccable leather covers and are as comfortable as can be. Plush Berber carpeting lines the floor and the metallic accents on the seating, door panels, center console and quarter trim offer an outstanding additional touch. The dash area sits just behind a spotless chrome tilting column and is as impressive as any you're likely to come across, with its steel surface flawlessly painted in flat brown to match the upholstery and a collection of aftermarket gauges lodged inside its fan-shaped instrument panel. The aftermarket climate control system blows cold and strong through in-dash vents and can chill the cabin in nothing flat. In back, the fully upholstered trunk area is absolutely museum-worthy.

This is a ride that evokes plenty of envy based on just its curb appeal alone, but this vintage Chevy also offers an outstanding driving experience. There's a 502 Crate V8 beneath its hood that's sitting in a pristine engine compartment, surrounded by inner fenders and a firewall color matched to the exterior and wearing an array of chrome components to maximize its aesthetics. The 502 is a beast of a powerplant - armed with a 4-barrel performance carb on its high rise intake manifold, it's good for in excess of 500 horsepower and sounds a commanding note out of the Borla dual exhaust to herald your arrival as it teams with a 4-speed automatic 700r4 transmission. With its Mustang II front end adding coilovers and power rack and pinion steering, and combining with a 4-link rear suspension, this Bel Air has a very refined ride, while disc brakes at all four corners team with a Wilwood master cylinder to bring prompt, fade resistant stops as it cruises on a set of American Racing Torq Thrust wheels - 17" in front and 18" in back.

Featuring outstanding curb appeal, abundant power and a show-stopping custom interior, this 1955 Chevrolet Bel Air Restomod will stand out in even the most impressive of automotive company. Call today! 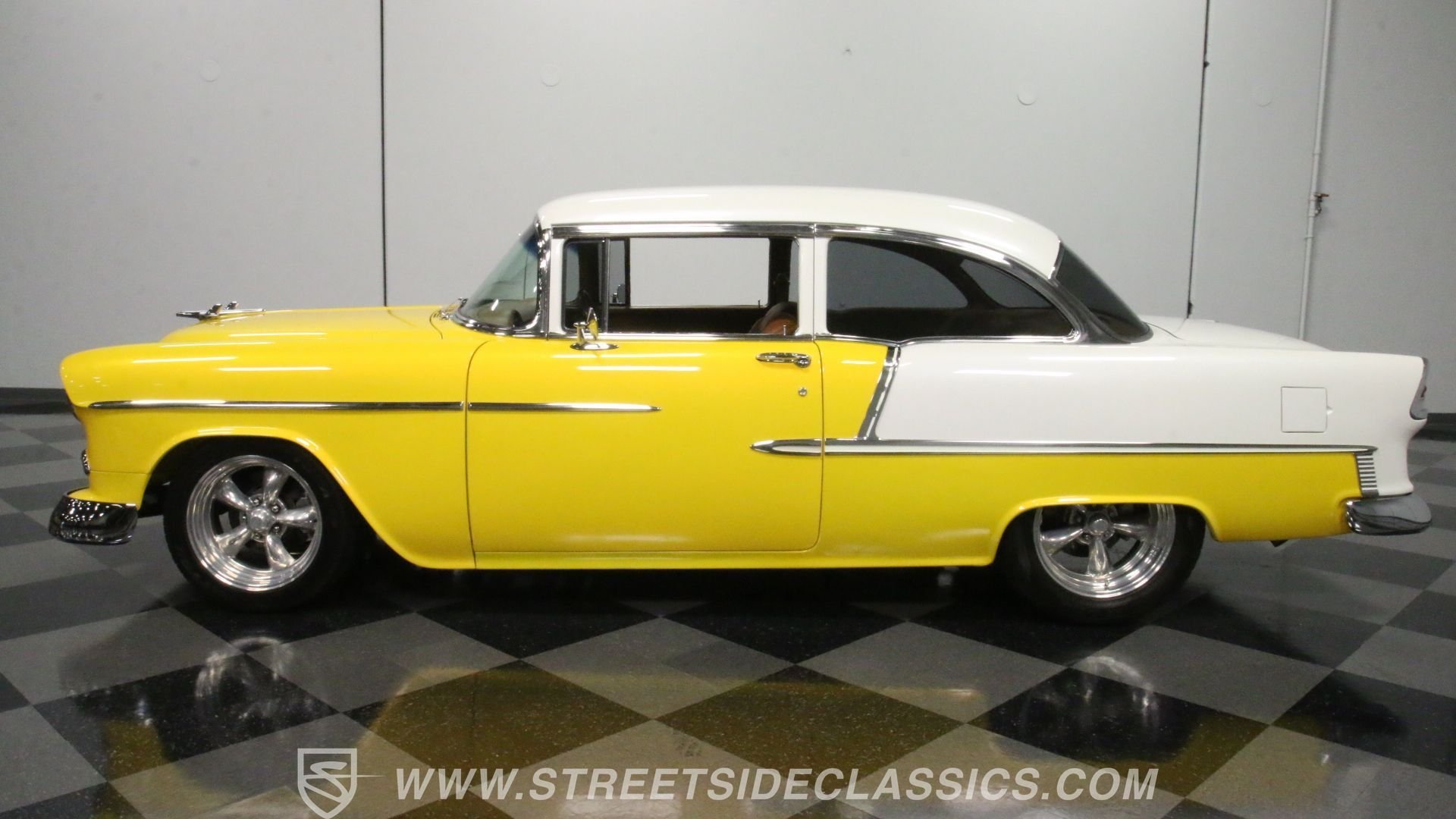