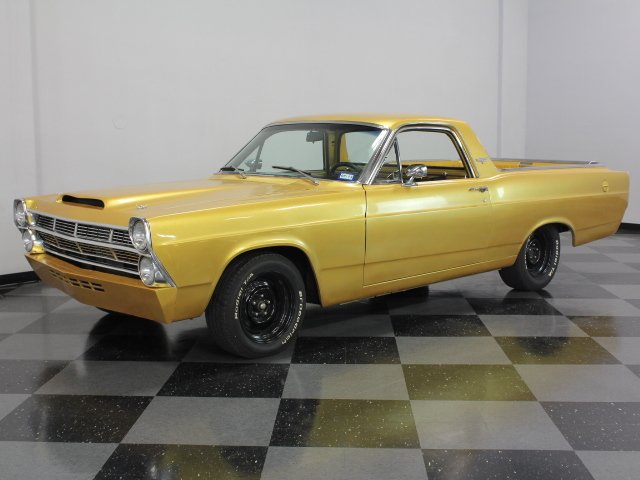 Pro-touring meets practicality in this awesome 1967 Ford Ranchero. Definitely unusual, totally cool, and outrageously capable, this car is impressive in every possible way. Powered by a stroked 5.0 and 5-speed, and featuring a state-of-the-art suspension and 4-wheel discs, it's the most outrageous truck/car we've ever featured.

You know at first glance that this isn't some garden-variety Ranchero. In fact, it's so far removed from its original working-class roots that it's really not even fair to call it a truck anymore. Sure, it's still got a bed and can still haul plenty of gear, but with the way it looks, accelerates, and corners, you'll be more interested in tackling a twisting country road than that bathroom project your wife keeps asking about. The vivid gold paint has a ton of metalflake in it, so it practically glows like it's radioactive or something. A few body mods add to the aggressive pro-touring look, including shaved bumpers, a subtle de-badging, and hood pins to keep it buttoned down. Paint and bodywork are good enough to be noticed at a show, but once this car's on the roll, nobody will care how it looks as it hammers away from them like a modern sports car.

The gorgeous interior got a full makeover during the transformation, and now sports a set of low-back Mustang buckets flanking a custom aluminum center console. The original instrument panel was tossed in favor of a complete set of analog gauges from Classic Instruments, and a fat steering wheel makes the most of the car's new-found handling prowess. In fact, the whole dash was reworked and now includes pushbutton starting, toggle switches for the fan and fuel pump, and a remote-controlled Ridetech suspension system with digital readout. That Hurst shifter manages a Mustang 5-speed gearbox with overdrive, so it's a relaxing cruiser but a joy to hustle through the twisties.

Mechanically, this Ranchero looks nothing like its old self. The engine is a 331-inch 5.0 stroker motor that was professionally built with 12:1 compression, a forged bottom end, and a set of deep-breathing Windsor Jr. heads. It looks like a race piece with its aluminum valve covers and MSD ignition system, and you'll note that the accessories were mounted low to help manage the center of gravity-that's attention to detail! Long-tube headers dump into a custom dual exhaust system with Flowmasters that exit just ahead of the rear axle, which is a pretty trick piece all by itself. The front suspension is augmented with a power rack-and-pinion steering system and disc brakes, along with a set of air shocks and lightweight adjustable steering links that really sharpen up the response. Out back, the 8.8-inch axle hangs on a sophisticated Watts linkage suspension that locates it laterally and uses another pair of air shocks to control ride height. More disc brakes out back, 4.10 gears inside, and subframe connectors reinforce the high-performance chassis. Brutal black steel wheels give it a road warrior look and wear staggered 205/60/15 front and 235/60/15 rear BFG radials.

You've never driven a Ranchero like this, a truck/car that'll easily show its taillights to anything this side of a Corvette. If that kind of madness appeals to you, pick up the phone, because this is one slick hauler. Call today! 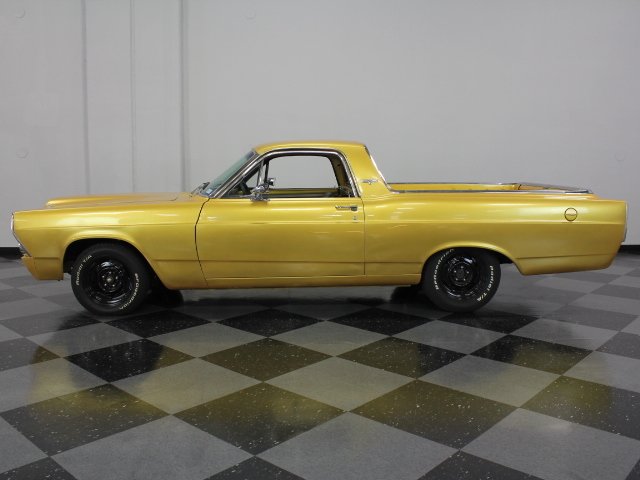