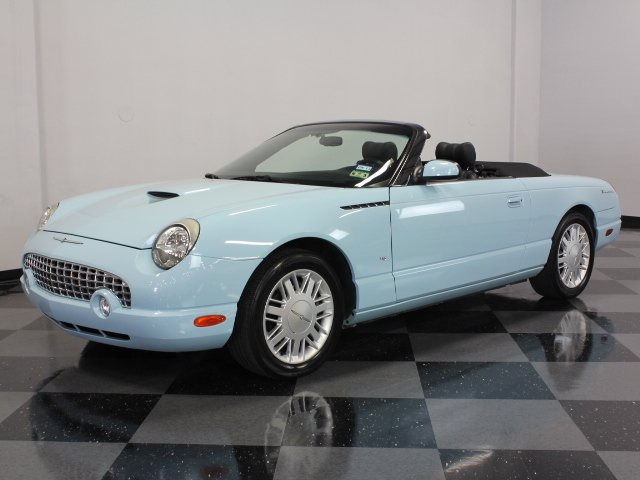 The future will be kind to the late-model Ford Thunderbird. Cars like this 2003 example in relatively rare Desert Sky Blue are sure to remain collectors' items for all the same reasons folks love the first-generation 2-seaters: style and performance. Well-maintained cars like this will demand the highest prices, and in the meantime, you have a great convertible that's always ready to play.

Showing just 20,395 miles on the clock, this T-Bird still looks and even smells new. Only 1744 Desert Sky Blue examples were built, and of the 2003 colors, this one seems to have the strongest connection with the cars of the past that inspired it. Pastels were in vogue when the first Thunderbirds hit the streets, and this modern-day tribute loves the soft colors just as much. Clearly only used on special occasions, it's in awesome condition with no signs of accident damage or neglect, and with the way the paint feels under your fingertips, it's pretty obvious that someone has been busy washing and waxing this car its entire life. Everything is pretty much as the factory made it, from the doors that fit tight and close easily to the shiny chrome grille that pays more than a passing tribute to the 1957 models. Ford's attention to detail on these halo models pays off big when things like the molded plastic bumpers and even the side mirrors are exactly matched to the bodywork. Nice work, Ford!

The interior is a bit more monochromatic than the '50s styling, but I suspect that nobody will complain about the black leather chairs in this 'Bird. The exterior's tribute to the past is one thing, but the interior is completely modern and comfortable enough to drive daily. The seats show only very minor signs of use and no damage, with an inviting look that asks you to take a long road trip. Everything you can imagine was standard equipment, from power windows to a powerful sound system. White-faced gauges are a concession to modern styling, but their markings are clear and easy to read. Thunderbird logos throughout the interior pay tribute to the originals with turquoise-colored inserts, and you'll find similar logos embossed on the seats. A black convertible top is there for emergencies, along with a white hardtop whose wonderful contrast with the blue paint will take you right back to the days of Elvis.

Ford's reliable and well-sorted 4.0-liter DOHC V8, the same one that powered other Lincoln motorcars, was the only choice in the T-Bird. Smooth but with enough performance to match its looks, it provides effortless acceleration at any speed. Never intended to be a sports car (much like its ancestors), it's instead composed and confident, ready to scoot away from traffic or loaf along the highway for hours on end. The engine bay's tidy looks suggest careful maintenance and an owner who cared about keeping up appearances, while the chassis looks like it's never even seen a puddle, let alone rain or snow. Dual exhaust makes for a fun soundtrack during top-down motoring, and special alloy wheels and all-season radials make for both sporting and comfortable cruising.

Future investors, don't overlook these cars! But in the meantime, put the top down and set out for the horizon in traditional T-Bird fashion. Call today! 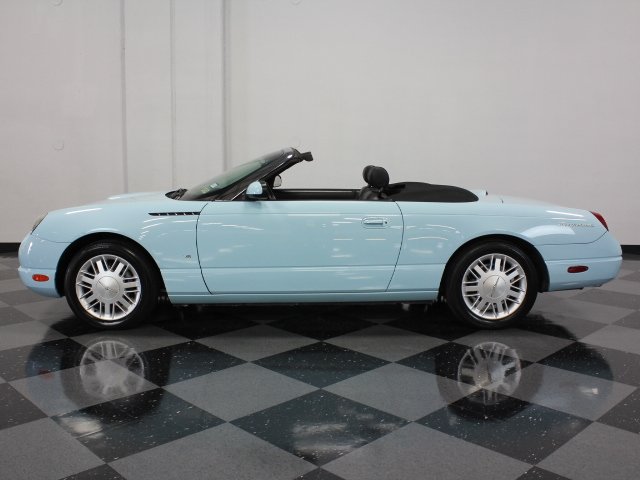