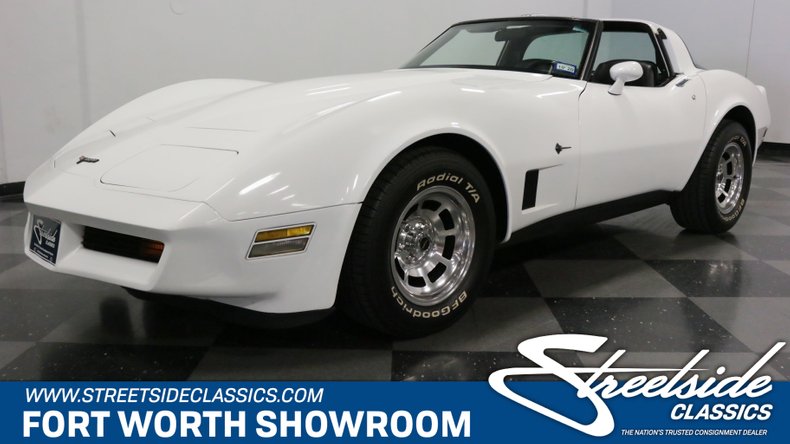 Get into the Corvette hobby for less than the price of a used Chevy sedan with this absolutely dialed-in, beautifully restored 1981 Chevrolet Corvette coupe. With fantastic paint, a beautiful black leather interior, and built-up 350 V8 under the hood, this great-looking T-top cruiser is a classic you'll enjoy far more than the bargain price would suggest. But great values like this don't last long these days, so take a closer look while you can...

Simply put, bright Code 10 White paint will never go out of style and accents the C3's dramatic styling better than almost any other color in the palette. Although 1981 was nearing the end of the line for the C3, it didn't diminish the iconic looks one bit, and even today these are some of the most distinctive Corvettes ever built. Everyone loves them. And when they look this good, falling in love is easy. Gaps are great, putting to bed the idea that these were not well-built cars, and the slick white finish really looks fantastic (easily nice enough to bring home a trophy at your local car show) with hardly any signs of use and no waves or ripples in the fiberglass. The hatchback profile greatly improved Corvette aerodynamics as well as the car's overall look, and it's enhanced by the modest ducktail spoiler that debuted in 1978. With most urethane bumper cars, the nose and tail sections aren't quite the same color as the rest of the body, but you definitely won't find that problem here. Everything is uniform in color, and the former owner loved the shade so much he had to go for the color-matched T-tops to finish off the look. That's exactly the kind of thing Corvette purists look for and judges love to see where original cars are involved. But don't be mistaken, even though this is '81 C3 is in great condition and has a lot of eye candy, it was purposely restored to be driven and enjoyed. Works of popular art are meant to be enjoyed by all, and taking this Corvette out regularly is almost a public service because it brings a smile to just about everyone that sees it.

Based on the condition of the interior, this car could easily claim to be a decade or two younger than it is. The black leather buckets show no damage and only very light wear, extraordinary for a car that's almost exclusively driven in the sunshine. Even with the T-tops off, the leather hasn't faded a bit, and the dark color works very well to hide dirt, so it always looks great as long as you clean up all that spectator drool fairly regularly. Other than a couple of minor cracks, the dash is original and in great shape, as are the door panels, plush carpet below, and even the padded vinyl inside the T-tops. Corvettes typically came loaded with options, and this one is no exception, carrying things like 4-disc power brakes, power steering, power windows, a tilt/telescopic wheel, cruise control, R134a A/C, and a heater/defroster. All the gauges are crisp, clear, and fully functional, including the factory set just ahead of the middle console, and the original, leather-wrapped 3-spoke steering wheel feels great in the hands of any adventurous driver. There's a middle console of course, and it houses the shifter for the automatic transmission, and just ahead of it is an upgraded Alpine AM/FM/CD head unit that handles all the entertainment. Out back, there's enough storage room behind the bucket seats to haul your trophies home, along with the T-tops that can be stored inside the factory bags that amazingly still come with the car.

The 350 cubic inch V8 under the hood is the original, numbers-matching engine, and in 1981 the L81 was the only choice. But obviously the 190 horsepower rating from the factory wasn't enough for the former owner, so 30,595 miles ago the motor was fully rebuilt and balanced with a mild Comp Cam and lifters, flat-top pistons, and ported heads. Despite those welcomed internal upgrades it still appears quite stock under the hood and is dressed up with its factory chrome air cleaner and air vent, finned valve covers, and neatly packed accessories and components. It fires with ease and runs incredibly well, with great throttle response up and down the tachometer. Heck, even the dual exhaust system looks quite stock, although the catalytic convertor was wisely deleted (there's no need for one in a nearly 40- year-old car) and it's a little throatier thanks to a couple chambered Turbo mufflers. The rebuilt TH350 3-speed automatic transmission snaps off shifts even more quickly today than when it was new thanks to a shift kit and 2500 stall convertor, and 1981 was also the first year for the fiberglass monoleaf spring, which not only improved chassis response, but shaved a considerable amount of weight. Four-wheel discs have been standard equipment since 1965, and the C3s featured some of the most powerful binders of the era. Underneath, the front suspension was rebuilt with MOOG control arm bushings, ball joints and KYG air shocks, while out back the rear trailing arms were rebuilt, and the strut rods, bushings, and shocks were all upgraded. Polished aluminum mag wheels are just the right complement to the white paint, and wear 255/60/15 BFGoodrich T/A white-letter radials with plenty of tread to finish the slick look.

Beautifully restored and documented with a factory buildsheet, original warranty card, and original owner's and service manuals, this dialed-in 'Vette makes for a great way to get into the game without spending a fortune. Call today! 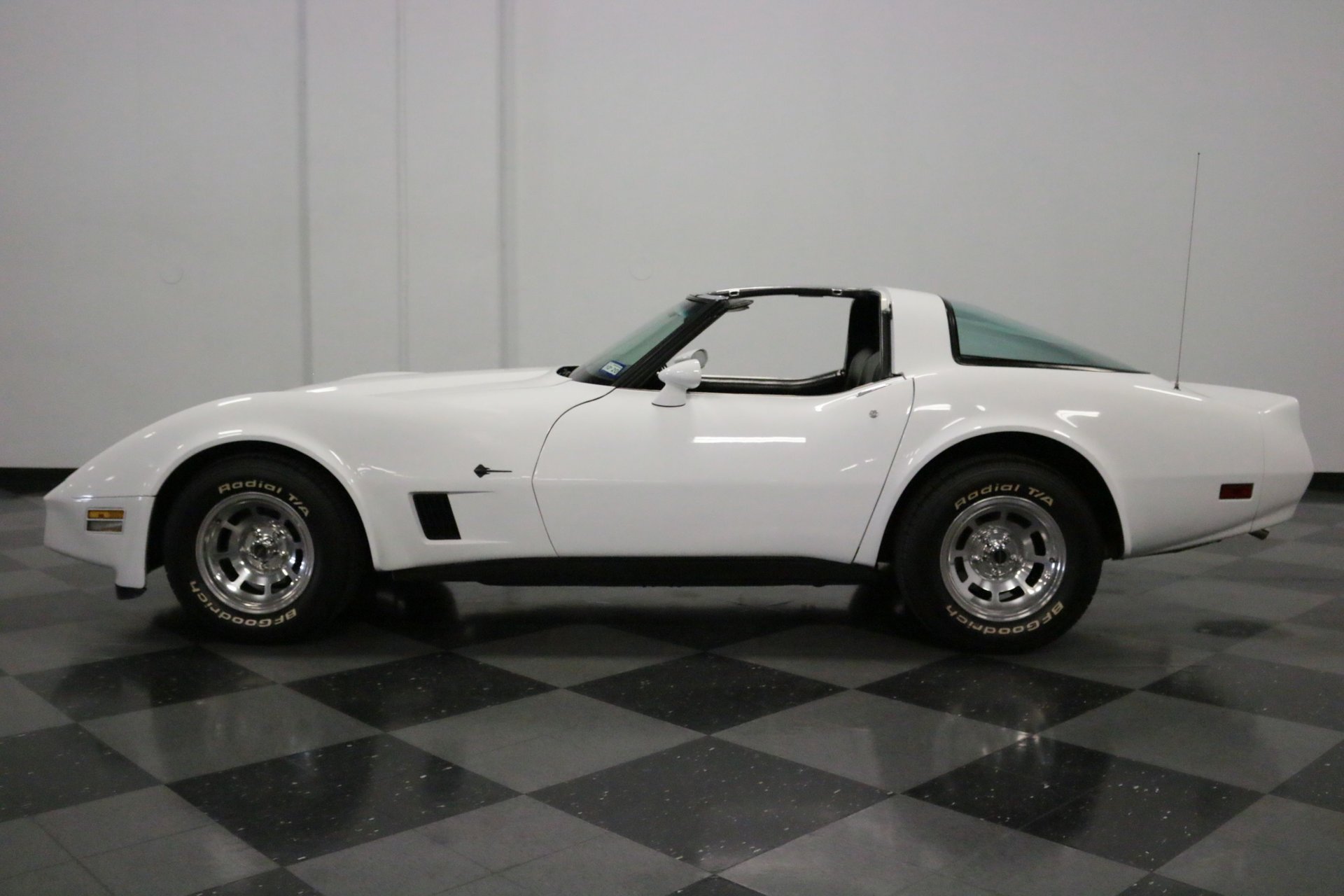