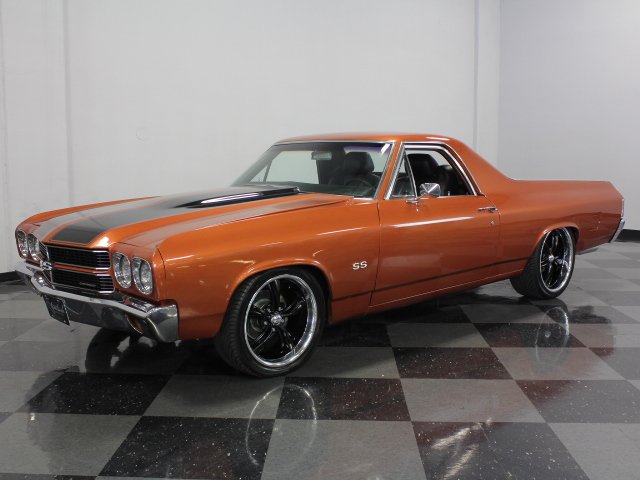 The owner of this 1970 Chevrolet El Camino won't need any other cars. With a built small block V8, it's pretty darned fast. With an air-conditioned and leather-lined bucket seat interior it can be driven every day. And with the bed out back, it's ready to work on the weekends. The ultimate hobby car? Don't bet against it.

If you don't want attention, this is the wrong car to buy. The Sunset Orange Metallic paint practically glows in the sun and with the spectacular bodywork and lots of hours spent sanding and buffing, it looks like a million bucks. It's a life-long California car that made the trip east in 2012, which was the same time it traded in its Marina Blue paint for what it's wearing today. In fact, it was only just finished in June and given its west coast origins, a full frame-off restoration was simply unnecessary (just check out the incredibly clean chassis photos!). The body was stripped to bare metal and rebuilt from there, with 8 coats of color, correct black SS stripes, then 5 coats of clear to seal it all up. Run your fingers along the domed hood and you won't feel the ridge and the shine looks about a mile deep, making this a car that you'll not only be proud to show, but eager! Chrome bumpers were restored, correct SS badges were installed, and the bed is protected by a color-matched spray-in bedliner that looks great and works as advertised.

Those of you familiar with El Caminos will hardly recognize the leather-lined cocoon of luxury found inside this awesome SS. The power black leather buckets are from a 2008 Cadillac CTS and include integrated seat belts for maximum comfort. A custom center console frames the B&M shifter for the TH350 3-speed automatic and includes a pair of cup holders and an armrest so it's first-class all the way. The original round gauge dash is still there, but the instruments inside are ultra-trick digital units from Dakota Digital that glow blue and have a multi-function display. The original radio is still in the dash, but an Alpine AM/FM/CD/iPod stereo hangs underneath for state-of-the-art entertainment. Everything else is new, including the carpets, door panels, headliner, and even the sun visors, and it all looks fantastic. Even the Vintage Air system blows ice cold.

The engine was replaced sometime in the '80s with a 350 cubic inch crate motor, so during the build it was pulled, cleaned, disassembled, checked, and upgraded in a few ways. Upgrades include an Edelbrock intake, a new Holley 670 CFM carb, a new chrome alternator, polished A/C compressor, and a fresh water pump and starter. The block was bathed in Chevy Orange and the entire engine bay was repainted in satin black for a clean look. BMR lowering springs drop it two inches in front and 1.75 inches in back for the perfect stance, power disc brakes were added, and a 2.5-inch dual exhaust system provides the soundtrack. Staggered Boss wheels with black centers and polished rims wear 245/40/18 front and 275/35/20 rear performance radials.

Heavily documented with just test and tune miles since it was completed, this is a show-winner waiting for its first chance at a trophy. Incredible to look at and even more amazing to drive. Call today! 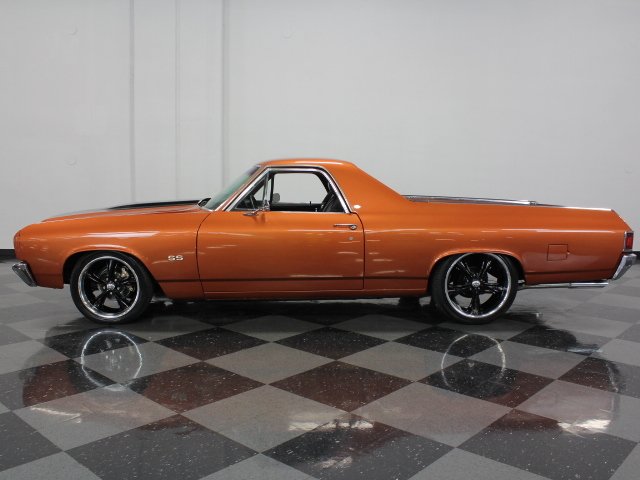