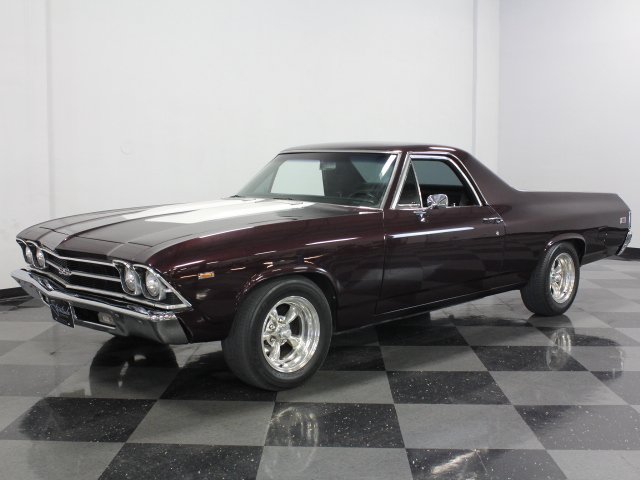 I think this 1969 El Camino is the ultimate hobby car. Now bear with me for a moment, but you can already see where I'm going with this. One, it has the same great looks as a Chevelle but with that bed, it can still carry anything you can throw at it: bikes, camping gear, skis, and even 2x4s for that new deck. Two, it packs a powerful V8 that makes all the right muscle car sounds with performance to match. And three, it costs a lot less than a comparable Chevelle would. How's that for a slam-dunk?

The Black Cherry paint simply looks amazing on any late-60s Chevy, and thanks to the ministrations of some talented guys this one looks ready to collect some trophies. Clean California sheetmetal makes it look easy, but there's a good investment in the gorgeous two-stage urethane finish, which also incorporates white stripes on the big block hood. Those long quarter panels are laser straight and haven't been bashed from the inside by years of hard work and just a glance in the bed will reveal that it's either been completely restored or this was a really nice Elky to begin with. Neatly masked spray-on bed liner material protects the floor, with the side walls and wheel wells painted to match the body and they're just as nice. A blacked-out SS grille in great condition, bright chrome bumpers, and a subtle de-badging give it a handsome look that will always attract attention at the local cruise night.

Like its Chevelle siblings, the interior of the El Camino is a great place to spend some time. The black bench seat wears a recent and correct replacement cover that looks great and matches the door panels and carpets. The vent windows are a great part of the car's charm, with the ability to keep things breezy and cool, but if it does get too hot, it does have factory A/C. An AM/FM/cassette stereo system has been stuffed into the original dash and powers a set of cleverly-mounted 6x9 speakers behind the seat. The steering wheel appears to be from a later vehicle but since it's OEM, it looks right in the El Camino's interior.

Traditional horsepower comes from a 1970-vintage 350 cubic inch V8 that's been built just for service in this El Camino. A factory QuadraJet carb still manages the fuel and for the most part they kept it fairly stock under the hood, which means it's a strong runner that'll stay that way for years to come. A few chrome dress-up parts add a little flash, but this one wasn't built for show under the hood, although it's quite clean with no issues. What that means is that you're cleared to take it for a drive without worries about dirtying up the vitals. In addition to the factory A/C, there's power steering and brakes, so this truck is as easy to drive as any Chevelle. A TH350 3-speed automatic transmission and a 10-bolt rear make for a reliable powertrain, and handsome Torque Thrusts with 235/60/15 radials look great.

Complete with its original Protect-O-Plate, this straight, clean El Camino is the kind of car that will be a joy to drive anytime and useful when you need it. Call today! 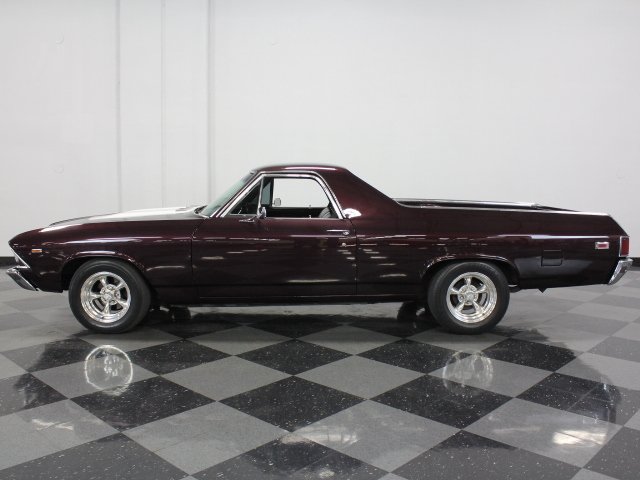