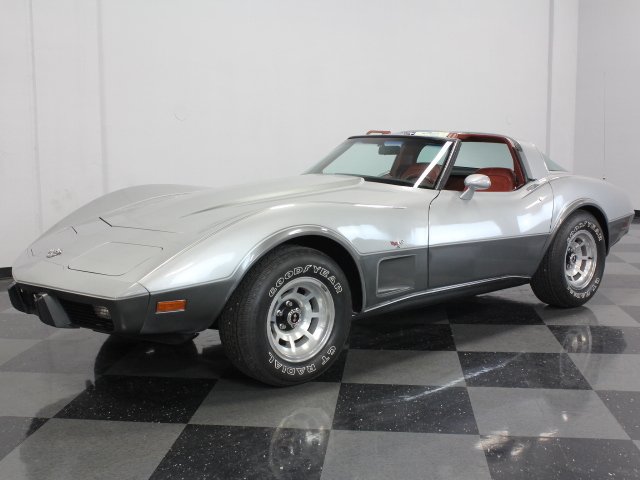 Another Anniversary Corvette, you say? Maybe, but look again. This is one of those incredible survivors that was stashed away for decades as an investment and better yet, it carries an ultra-rare Mahogany cloth interior to boot.

Truthfully, the paint job on the Anniversary 'Vettes is still one of the most handsome combinations to come out of 1970s Detroit. It's sophisticated, not loud, and emphasizes the Corvette's best features, which are those dramatic "Coke bottle" fenders. The fastback roofline was new, and not only improved aerodynamics but increased cargo capacity, making the Corvette a car that was truly able to be used daily. Showing just 1611 original miles (not a misprint), however, this one was obviously never a daily driver, and is just as clean inside and out as you'd expect. The original paint is impressive, showing signs that it has been expertly maintained for the past three-and-half decades and as far as these cars go, this one is better than most in terms of color-matching on the various parts. At a show, when you park this one on the field experts will come out of the woodwork to pour over its exceptional originality and while it can't shine like modern urethane paint, the honest soft gloss of the original paint will win a lot more fans than any restored car ever could. There's just something special about survivors like this and you'll love being the center of attention.

That code 76C Mahogany cloth interior I mentioned earlier is flat-out gorgeous. While most Anniversary models received the standard silver leather buckets, the Mahogany cloth was available but seldom chosen. Looking at the lovely dark red interior of this 'Vette, I'm puzzled as to why because it's simply amazing. It's also all original, and shows zero wear as you'd expect, although the carpets have aged and there's just not much you can do about that. Unmarked door panels, a steering wheel wrapped in matching leather, and a center console that looks like it belongs in a luxury car instead of a Corvette complete the ensemble. This one is also loaded with options, including A/C, power windows, a tilt wheel, and the original AM/FM radio in the center of the dash. Factory T-top bags are stashed in the trunk and the weather seals are still supple so the car seals up like new. Heck, even the original window stickers are still clinging to the passenger side window!

The original, numbers-matching 350 remains under the hood in essentially untouched, factory-correct condition. Corvette buyers got a smooth, torquey small block that made the Corvette one of the most potent cars you could buy in 1978, such as it was, and this one runs superbly. In fact, this one is so authentic and original, you'll be proud to tilt the hood forward at Bloomington and show off the factory decals and markings, and it's fairly certain that things like the belts and hoses are also original to the car. A three-speed automatic transmission was the only choice in '78, and the rest of the chassis is just as it would have been a few days after the car was unloaded from the transporter. The factory aluminum wheels are, of course, unmarked and wear 255/60/15 Goodyear Eagle radials.

This is an investment-grade, fully documented Anniversary Corvette with a rare interior that really stands out. Call today! 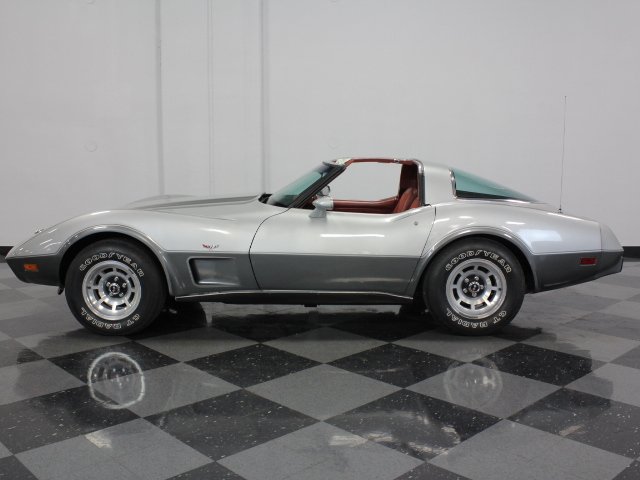