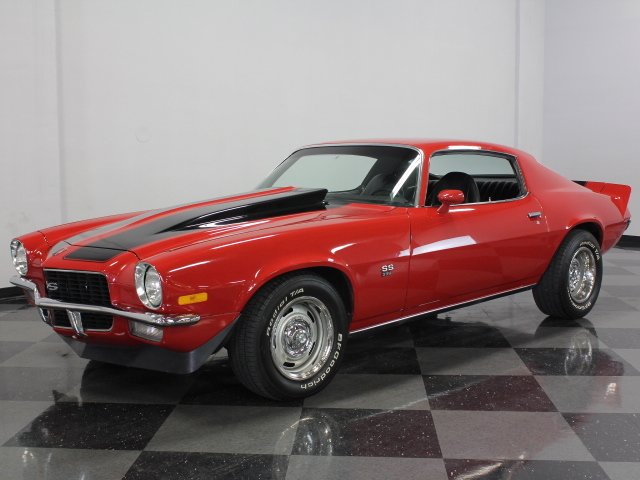 Numbers junkies are going to be disappointed that this 1971 Camaro SS, which is a real-deal Z27 small block SS, doesn't have its original 350 under the hood. However, horsepower junkies will be delighted that there's now a thundering 396 inch big block under that cowl induction hood, making this car more of a threat today than it ever was when it had a "correct" 350 in it.

This SS certainly has the right look, and sneaking around quietly is not what it was built to do. Cranberry Red is its original color, now beautifully refinished using modern materials so it truly shines. Second-generation Camaros have always been popular machines simply because they look fast sitting still, and with the chin spoiler, ductail spoiler, and black SS stripes, this one definitely qualifies for the "looking fast" category. A cowl-induction hood was added during the restoration and it wasn't hacked up to become a fake RS, and proudly wears its original blacked-out SS grille and chrome bumpers. This car is quite clean underneath, so there are no worries about rust in the usual spots, and the way it feels and fits together suggests a car that has been well-treated all its life. SS396 badges are a nice addition that advertise what lives within, because, honestly, there's really no point in trying to be subtle with this car.

This car originally came with a code 777 Sandalwood interior, but somewhere along the line it was upgraded to the handsome black setup it wears today. Obviously that meant new carpets, door panels, seat covers, and even the center console, all of which are in very good condition. The factory gauges are still in the dash, but the critical information is relayed via a column-mounted tach and a set of auxiliary gauges in front of the center console, all of them wearing racy white faces. A Sony AM/FM/CD stereo has been stuffed into the dash in place of the tinny original unit and the trunk shows no issues and carries a space-saver spare just in case.

So about that 396 under the hood. With an Edelbrock intake and carb, a full roller valve train, and long-tube headers, it makes anything built by the factory in 1971 look like your mom's grocery-getter. It cackles to life quickly and easily, and idles with the menacing tones that we've come to expect from the fastest cars on the street. There's enough chrome on there so that you can show it off a bit, and with the Chevy Orange paint, they at least made an effort to give it a factory look. There's lots of evidence of careful maintenance and it runs and drives extremely well with a lot of power available with a twitch of your left foot. A quick-shifting TH350 3-speed automatic and a rugged 12-bolt rear mean that this car is just ruthless in tight traffic, and the Flowmaster exhaust system provides the ultimate stereo accompaniment. Rally wheels look great on any F-body, and with staggered 235/60/15 front and 255/60/15 rear BFG radials, it has enough of a rake to look downright wicked.

Flashy and fast, this F-body definitely looks the part of a street brawler. Call today! 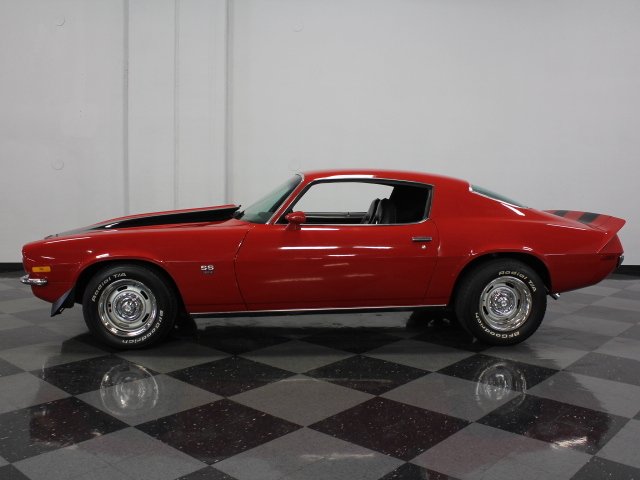