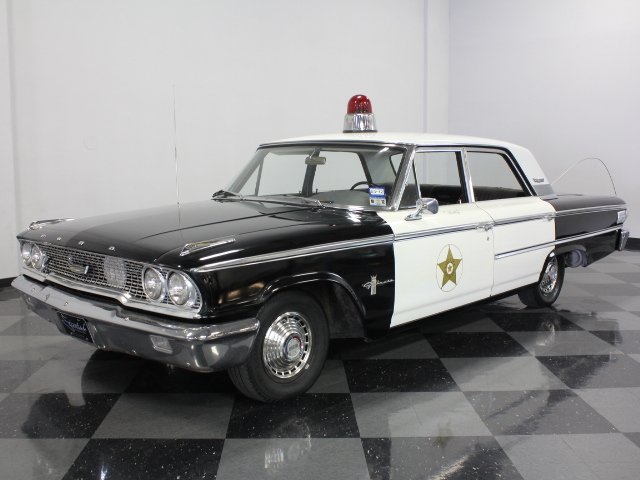 If you've turned on the TV in, oh, about the last five decades, you probably already recognize this 1963 Ford Galaxie police cruiser. Andy Taylor and Barney Fife kept the streets of Mayberry safe for years from behind the wheel of this "prowl car" and everywhere it goes today people burst into smiles with happy memories of a simpler time and place.

OK, so it's not the EXACT car used on TV, but it's awfully darned close! Someone must have spent a lot of time studying their TV screen to get the details right, starting with the foundation. It's a very clean 1963 Galaxie sedan which is an imposing machine all by itself. With a suitable foundation, it was given the distinctive black and white paint job that means "Police" all around the world, and finished off with replicas of the Mayberry Sherriff's star on the front doors. All the bright Galaxie trim remains save for the strip that runs through the front door, which was removed for obvious reasons, and to work with the early 1960s look, it hasn't been over-restored or buffed to perfection, but shows a nice patina that is a better match for the Mayberry vibe. Of course, accessories like the red "gumball" on the roof and the long whip antenna on the rear bumper that straps to the roof pillar are details that any Mayberry fan would instantly recognize. And just in case you didn't recognize it, "Andy" and "Barney" are spelled out on the two front doors.

Inside, it's pretty much original Galaxie, but I'm guessing that a police-issue Ford wouldn't be this luxurious. The original black cloth upholstery might be starting to show its age a bit, but I wouldn't worry about replacing it since it works with the overall patina of the car, and any "perps" you stuff in back will surely appreciate the spacious legroom and comfortable bench seat that's not sticky vinyl like the original. Seatbelts have been added for the front seat passengers and the factory dash is quite nicely preserved with shiny metal trim and factory gauges. The original AM radio remains in the dash, with a modern Pioneer AM/FM/CD head unit underneath doing its best impersonation of a police radio unit. The handcuffs are an accessory, too, and will be included with the car if you ask nicely, although you'll note that Andy Taylor never really needed them. There's also a massive trunk with a spare and jack assembly.

For prowling the streets of Mayberry, the 352 cubic inch V8 was an excellent choice: quiet, unobtrusive, but with the muscle it needed when it was time to hustle. Wearing bright Ford blue, it runs well and thanks to a massive cooling system and powerful electrical system, it's ideally suited for parade duty. You'll also note a functional vintage siren under the hood that sounds appropriate but should be used with discretion. It's backed by a 3-speed automatic transmission and 3.00 gears in the 9-inch out back, so it's a great highway cruiser for distant shows, and with a new exhaust system, it just whispers along the highway. Black steel wheels with dog dish hubcaps and blackwall tires add to the vintage rural police look.

A favorite everywhere it goes, this is a fun, inexpensive way to be the center of attention. Call today! 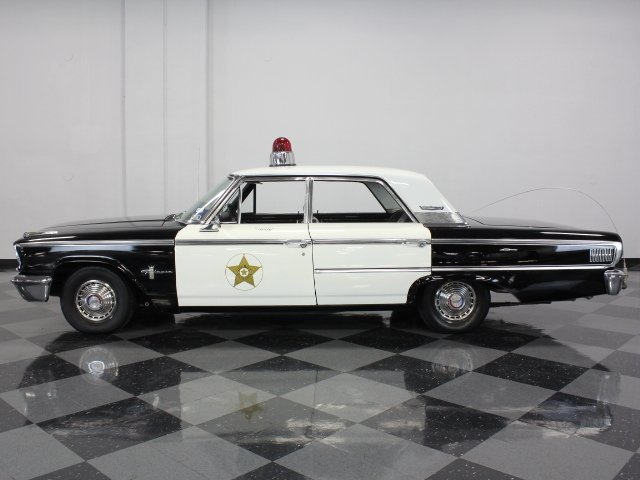