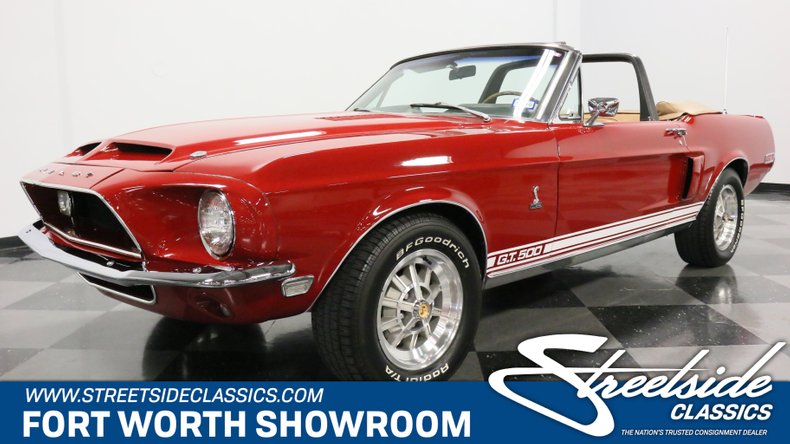 First things first, just to save you the trouble of asking: yes, it's a real GT500 convertible, yes it has a 428/4-speed, and yes, it's documented. If you're a Ford muscle fan, you know there's not much better than a 1968 Shelby GT500 in Candy Apple Red with a 4-speed. Not to mention how rare these cars are with this one being 1 of only 402 GT500s ever made in this iteration. Professionally restored to an incredibly high level, this no-excuse Shelby convertible might be the coolest car in our inventory.

According to the Marti Report, original build sheet, extensive restoration pictures and other documentation, this car has been restored to a factory level that even Carroll Shelby would be proud of. There's just no mistaking the Shelby look, from the custom fiberglass hood, to the side scoops, to the molded rear deck lid and sequential taillights, it makes a loud statement. And even after they started assembling the cars at Ford's Southfield, Michigan facility, they were never this nice right out of the box. The pros at Orlando Mustang had a blank check directive to make this car a show-stopper, and when they finally finished in 2011, that's exactly what they produced. Gaps are excellent, even around the hood which is especially problematic for restorers, and you'll note that the spoiler out back lines up neatly with the fenders. That's not easy to do. The white convertible top is a tad wrinkled in case you're looking for something to nitpick, but it can be stretched out in the sun very easily, and the rear glass is clean and clear. With everything in order, it was covered by several layers of Code T Candy Apple Red, a pair of Wimbledon White GT500 stripes, and then finished to show standards. All the correct Shelby bits are there, including the Marchal driving lights up front, hood pins, SHELBY block letters, and, of course, the coiled snake emblems on the fenders.

Open the door and you'll find beautifully restored Code 6FA Saddle Décor group interior that compliments the Candy Apple Red perfectly. The door panel sets the theme in a two-tone treatment with a woodgrain panel trimmed in chrome piping and ribbed chrome dresses out the bottom. The original and correct two-spoke steering wheel with a Shelby center is mounted on a tilt-away column. The dash is stock and super clean with a wood grain upper with all the chrome trim and controls looking great and shining bright, and as an added plus the glove box was endorsed by the legendary Carroll Shelby. Ventilation controls include those for the factory optional "Selectaire" air conditioning which was only available in conjunction with the automatic transmission (this particular Shelby was converted to a 4-speed). So, the shift-knob for the 4-speed rises out of a beautiful wood grain center console that includes Stewart Warner gauges for oil pressure and charging amperage at the front with a nice Cobra armrest on top of the storage compartment. The backseat is also freshly finished to match the rest of the interior and the factory roll bar looks absolutely amazing when the power top is lowered. Pop that fiberglass deck lid and you'll find a correct mat and full-size Shelby 10-spoke spare wrapped in a Goodyear Eagle ST, ready for show duty.

Under the hood is exactly what you want to see. This is Ford's big 428 cubic-inch V8 borrowed from the Police Interceptor package. This is believed to be the original motor (there's no way to know for sure if early Mustangs are 100% matching numbers, but this one has all the right equipment, correct date-code, the "C" stamp on the back of the block, and matches the build sheet, which is about as close as you can get), and you can see there has been a huge investment here during the restoration. The bold blue block, hallmark fined air cleaner, matching valve covers, correct decals, and all the correct components look so fresh that this engine bay is award-worthy all on its own. Plus, the solid investment here also means this 4-barrel carb fires up the big block easily with a ferocious roar from the ceramic coated manifolds that feed the dual exhaust. But don't just hear the sound; follow its path in the undercarriage photos where you'll see more of the impeccably clean look and proper red oxide underside on the super-solid pans. And they even upgraded this to a Toploader 4-speed manual transmission from the original C6, so you get to have the ideal control over all that Ford power. Add in the sports suspension, power steering, and power front disc brakes, and this bright GT500 is ready to take on any asphalt. The look is finished off with correct Shelby 10-spoke rims wrapped in 235/60/15 BFGoodrich T/A radials.

An important car like this needs the right paperwork to back it up. That's why the sale comes with a rare factory build sheet, Marti Report, tons of receipts, and extensive pictures of the restoration process. This is rarity restored with the respect it deserves, so if you're a true enthusiast, call today! 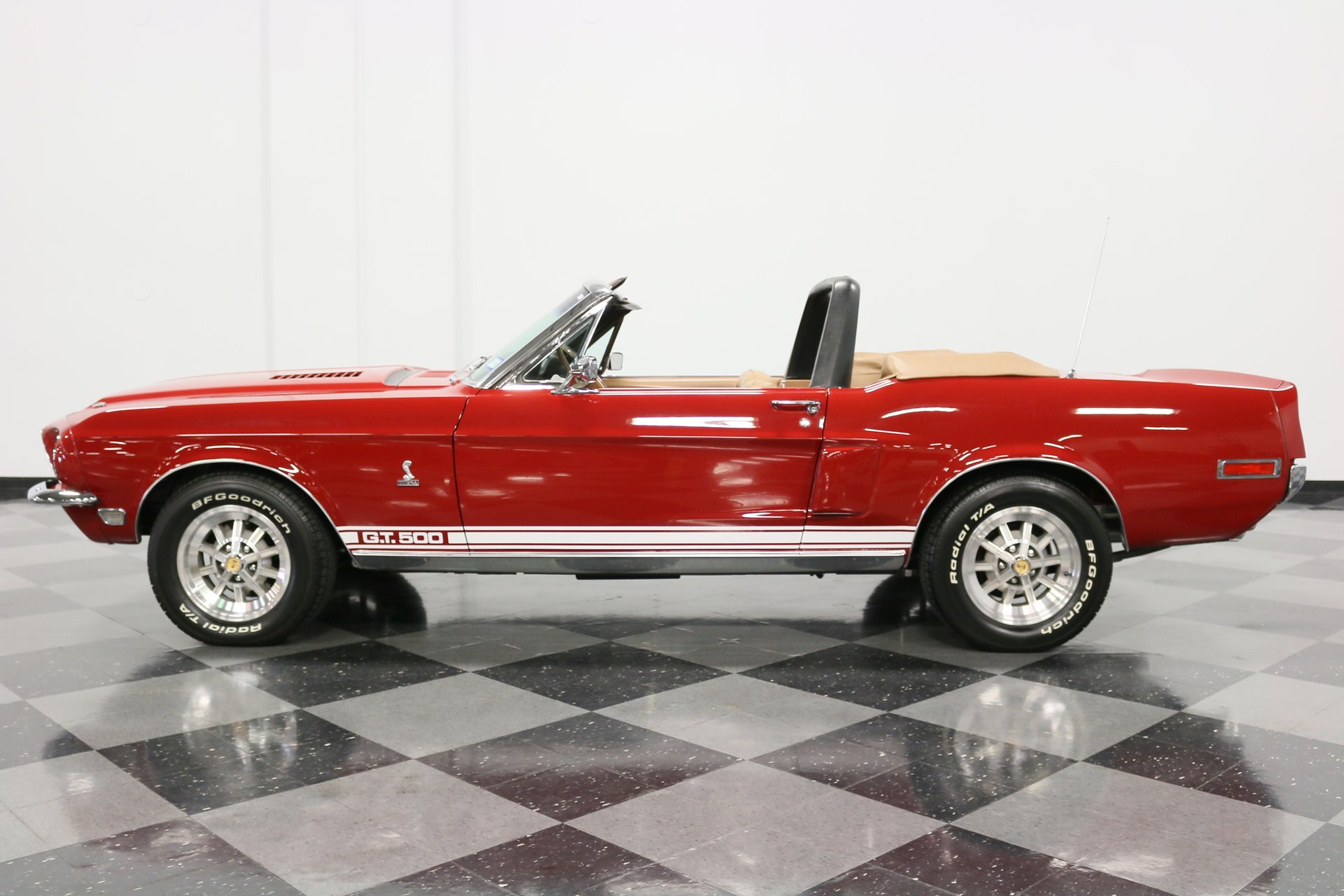