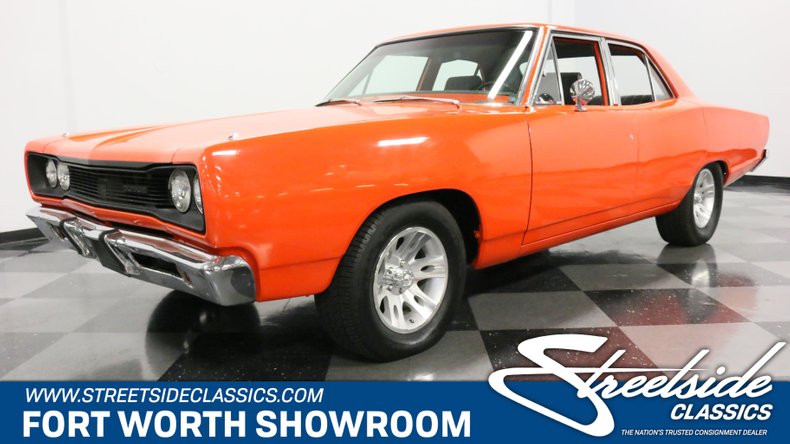 If you're frustrated by the skyrocketing prices of the more familiar 2-door versions of the Dodge Coronet, Super Bee, and Charger, then perhaps something like this 1969 Dodge Coronet sedan would be a great solution. With a smooth running small block, a Hemi Orange paint job that just screams performance, and enough room for the whole family, this bargain-priced piece of muscle is worth a second look.

This slick 4-door does a great job of disguising its daily-driver roots; with the door handles shaved, a lot of people probably won't even notice the extra two doors! That's purely intentional here, where they took a plain-Jane sedan and gave it a thorough makeover that turned it into a car that earns more of its share of double-takes. Hemi Orange obviously isn't this car's original color, but nobody's going to argue with the finished look of this Coronet, because it looks downright predatory today. Finish quality is extremely good, particularly for a car in this price range, and aside from a few signs of use, it looks quite fresh indeed. Gaps are good, too, and there are twice as many of them here so you know there was plenty of time invested in getting it right. To help with the illusion, most of the emblems were shaved, as were the side marker lights, and with a blacked-out grille, it seems to earn its seat at the muscle car round table. From the back, it looks very much like its brother, the Charger, and the big chrome bumpers are in excellent condition, adding a bit of sparkle that really works.

The interior got a muscle car makeover, too, complements of a pair of high-back bucket seats that appear to be from another Chrysler product. There are matching gray cloth inserts on the door panels and back seat, so it wasn't a halfway-done conversion and from behind the wheel, this car looks and feels like one of its more sporting 2-door siblings. The original steering wheel is pretty tired, so look into replacing that to help with the illusion, but everything else can stay, including the instrument panel, which is identical to other B-body performance machines. The back seat is notably massive and makes for comfortable seating for real-sized adults, something that can't be said for the 2-door models. There's no radio, but you could easily add one if that's your thing and the giant trunk with a full-sized spare makes this a great candidate for long-distance cruises.

When you fire it up, there's no question that this Coronet sounds and feels like the genuine article. The 318 small block has about 8500 miles on the rebuild and runs every bit as smoothly as it should. Upgraded with a Holley 4-barrel carburetor and Edelbrock intake manifold, some chrome valve covers, plus long-tube headers, it's definitely got the juice. The massive engine bay leaves plenty of room for service access and they kept it pretty much the way the factory would have done it, including the alternator, radiator, and TorqueFlite 3-speed automatic transmission. The front suspension has been rebuilt, so it tracks straight and handles well for a vintage sedan and a pair of glasspack-style mufflers gives it an awesome rumble at any speed. It's clean underneath, which is always a relief, and it sits right on those flashy aluminum MB Motorsports wheels and giant 245/60/15 front and 275/60/15 rear performance radials.

Affordable fun is always in style, and when it pays tribute to some of the greatest cars of the era, it's a slam-dunk. Call today!