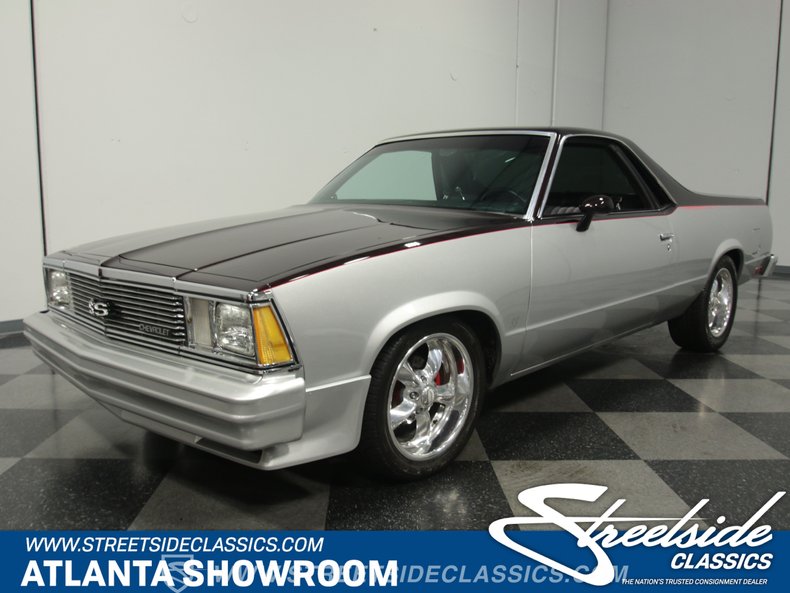 We sell a lot of El Caminos, but not many come through our doors that are as nicely finished and still highly functional as this 1982 Chevrolet El Camino SS. The paint is very nicely done, it's got a strong-running 350, and with all the luxury features, it's a pleasure to drive just about anywhere.

The early 1980s were a dark time if you're a car guy, but the hardware can still make a fantastic foundation for something awesome, as this El Camino proves. Repainted a few years ago, it's no longer 1980s frumpy but rather modern and sleek. The two-tone silver and burgundy paint really updates the shape and makes it look long and sleek, as if a street rodder needed a cool hauler and built this for himself. The bodywork underneath was clearly in good shape, because the flanks are smooth and shiny and everything fits together better than you'd expect for 1981. There are some minor signs of use and age in the paint, but nothing that'll force you to stay home from the shows and we can guarantee that this car, er, truck will attract attention no matter where you drive it. The bumpers were color-matched to the bodywork, but the rest of the chrome shines up beautifully, and they've added a retro-style SS emblem to the grille, a nice touch. The bed is also neatly finished with both a spray-in bedliner and a mat, and someone thoughtfully installed a high-mounted brake light at the front of the bed for safety.

The interior is mostly stock, but it's in remarkable condition. The original bench seat means it's still spacious and comfortable inside, and the gray upholstery looks very appropriate for GM in the 1980s. The most noteworthy modification is the four-spoke steering wheel, and it's bolted to the original tilt steering column, so it's easy to get comfortable. Other options include power windows and locks, cold A/C, and even cruise control. The stereo has been upgraded with an AM/FM/CD head unit and the gauges are in good original condition behind a smoked glass panel. Red floor mats add a little contrast to the mostly monochromatic interior, and you'll note that the appliques on the instrument panel have been painted silver to match the bodywork, a subtle touch that most folks may not even notice.

Mechanically, this Elky is extensively upgraded. The wheezing smog motor is gone, replaced by a strong-running 350 cubic inch V8 topped by a Holley Street Avenger 4-barrel carburetor, HEI ignition, and a significant dose of horsepower. Lots of chrome really dresses it up under the hood, and with less than 10,000 miles on the build, it's still fresh. Underneath, there's also a rebuilt TH350 3-speed automatic transmission spinning the original rear end, so it's comfortable on the highway. The suspension is fitted with 2-inch drop spindles, Hotchkis front and rear springs, a rebuilt front end, and Global West upper and lower control arms out back. A rumbling Flowmaster exhaust system sounds about right for a vehicle that looks like this, and obviously this truck didn't come from the northern states. Cool Boyd Coddington wheels have a traditional look and carry staggered 235/45/17 front and 255/50/17 rear Kumho performance radials with a lot of life left in them.

Great looking and fun to drive, this is a nicely built machine that's going to stand out. Don't worry, we won't tell anyone just how affordable it really is. Call now!