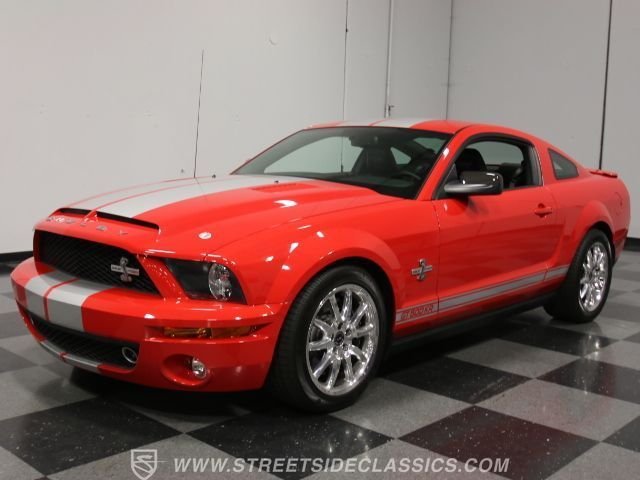 In the world of Mustangs, few are as legendary as the Shelby GT500KR. Everyone knows that KR stands for "King of the Road" which was Shelby's way of stealing GM's thunder, as they were planning a Camaro with just such a name. So when the new Shelby GT500 debuted, it was only a matter of time before the KR showed up once again. With just 571 of them built in 2009, they're a guaranteed collectable now and in the future, especially one with just 4189 original miles!

The KR package added a few styling cues that are instantly recognizable, including the twin-snorkel hood that reaches almost to the nose of the car. It's rumored that this hood alone costs $20,000 to replace, but that's understandable since it's 100% carbon-fiber and includes trick twist-lock hood pins. It also helps explain the KR's staggering $82,000 original sticker price, making this one some kind of insane bargain with a sticker under $50K. With just 4189 original miles, it's definitely in collector-grade condition, used just enough to keep it healthy but obviously never a daily driver or even in inclement weather. The paint is bright red and the contrasting silver stripes on this particular KR help ensure that you'll never go unnoticed and announcing that this Shelby is definitely something special. A few badges remind everyone that this is something special, but for many, the big horsepower means that it's OK to be brash, bold, and in-your-face.

The interior is pretty much like any GT500, which is a retro-themed cockpit that's built for performance. Black leather buckets do a good impression of the 1967 Shelby's chairs, albeit with a lot more bolstering. A fat leather steering wheel, comprehensive instrumentation, and carbon-fiber accents mean that it neatly straddles yesterday and today without looking like it's trying too hard. Shelby adds their own badging, with the most important being the serial number plate between the center A/C vents. All of the Mustang's options were standard on the KR, including power windows, locks, seats, A/C, a trip computer, and a powerful AM/FM/CD stereo with in-dash CD changer. A big, fat white cue-ball knob for the 6-speed manual is another retro feature that's been neatly updated for the 21st century and it works even better than the old Toploaders of yore. There's a neatly finished trunk that's never been used, and I expect it'll stay that way because baggage adds ballast.

The heart of the KR is an upgraded 5.4 liter supercharged V8. With an extra 40 horsepower, it sat neatly at the top of the Shelby food chain. It's still built by the guys at SVT who put their personal signature on each engine they build, but thanks to a little more boost, a cold air intake, and a few ECM tweaks it's an entirely different animal. The suspension is augmented with unique spring rates, dampers, stabilizer bars, and strut tower brace, and the result was so good, it became the foundation of the next-generation GT500. 3.73 gears mean it runs like a scalded cat, yet the overdrive gears ensure that it doesn't get nuts on the highway. Special forged alloy wheels are fitted with custom-made 255/45/18 front and 285/40/18 rear Goodyear Eagle F1 Supercar radials.

Future collectors take note: limited-edition Shelby Mustangs with big horsepower will always be in demand. This one's available at quite a bit under the original price, but surely that's only a temporary situation. Call today! 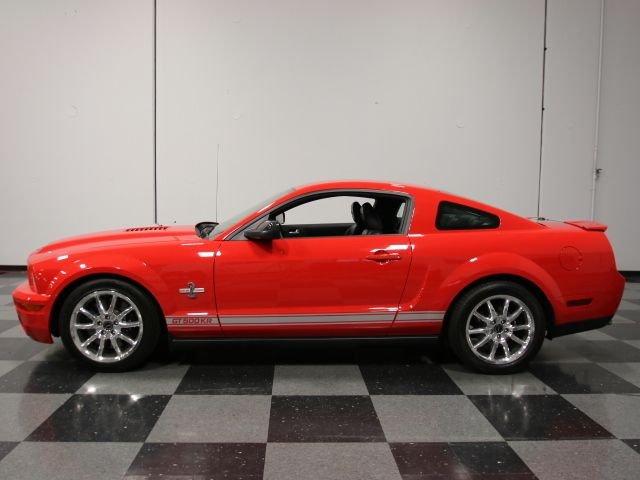