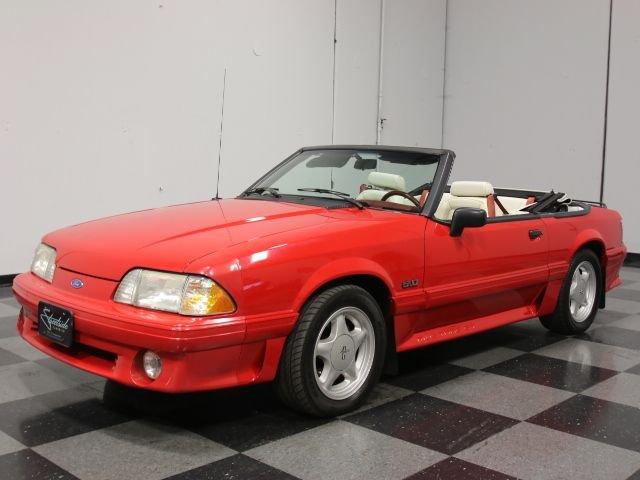 The 5.0 Mustang was arguably as big an influence on car culture as the original small-block Chevy. Putting traditional high performance within reach of almost everyone with a checkbook, it shouldn't be a surprise that Ford built millions of them. However, for those same reasons, finding one that hasn't been abused, raced, cut up, modified, and thrashed to within an inch of its life is definitely a challenge 20 years later.

Fortunately, we were able to round up this gorgeous 1992 Mustang GT convertible in a stunning red-over-white color combination. Aside from a set of ubiquitous high-flow mufflers, it is completely stock, and with just about 34,000 original miles, it has never been used as a daily driver. The original red paint has survived the intervening years quite well, showing a nice gloss and surprisingly little orange peel, given how the factory was applying paint back then. The urethane ground effects that give the GT its unique look are in excellent condition, and both doors fit well because the body hasn't been torqued by big horsepower and sticky tires at the strip. There are a few touch-ups here and there, as you'd expect, but the overall state of preservation is pretty impressive considering the lives most of this car's siblings must have led. All the black rubber parts that usually turn gray with age and UV damage are supple and dark, including the window sills and inserts on the trunk-mounted luggage rack, which was Ford's way of disguising the CHMSL on the ragtop Mustangs. And, of course, the "cheese grater" taillights are in excellent condition, the headlights haven't turned cloudy, and, well, someone clearly loved this Mustang.

The white leather interior is inviting and functional, with supportive buckets that were some of the best on the market in 1992. The dash is simple, with great high-visibility gauges, fingertip controls for headlights, and big rotary knobs for the A/C system. The combination of white leather seats, two-tone door panels, and red carpets and dash works really well, giving the Mustang a kind of upscale look inside, and there's virtually zero wear, even on the high-traffic side bolsters. Heck, even the center armrest and ashtray door are intact, two plastic items that rarely survive the years. This GT came loaded with just about every option, including A/C, power windows, mirrors, and locks, cruise control, interval wipers, and an AM/FM/cassette stereo which still sounds decent. A white power top offers a glass rear window and folds itself in seconds with the touch of a button. In the trunk you'll find an optional cargo net as well as a CD changer that is the lone interior upgrade.

The 5.0 liter EFI V8 under the hood is the reason the Mustang was the pony car of choice for an entire generation. Great sound, bulletproof performance, impressive torque, and an aftermarket that could transform it into anything your wallet could afford. This one is completely stock, and hasn't been raced or abused, and wears only the aforementioned mufflers, probably for sound as much as anything else. There are signs of recent maintenance under the hood and with a quick-shifting AOD 4-speed automatic overdrive transmission, this Mustang is a blast in cut-and-thrust traffic. Super clean underneath, this is the kind of Mustang we all long to find and which is becoming increasingly scarce today, and it shows zero evidence of ever being in the snow. Even the original 16-inch "Pony" wheels are virtually unmarked, sporting correct 225/55/16 Goodyear Eagle radials.

These are the collector cars of tomorrow and finding a Fox-body 5.0 that hasn't been thrashed is going to be tough. This one is ready to go with no stories so call today! 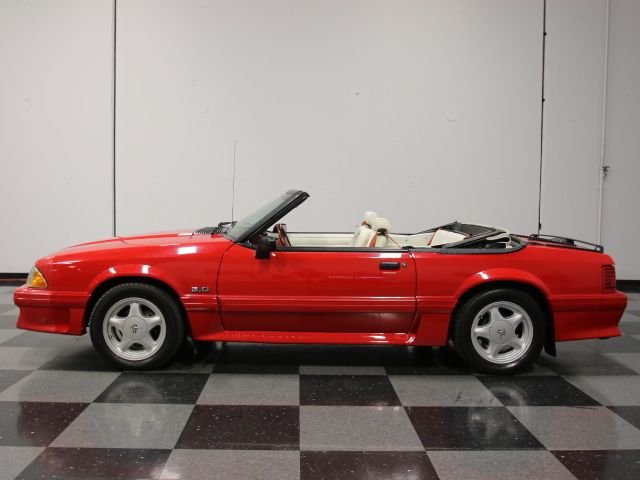