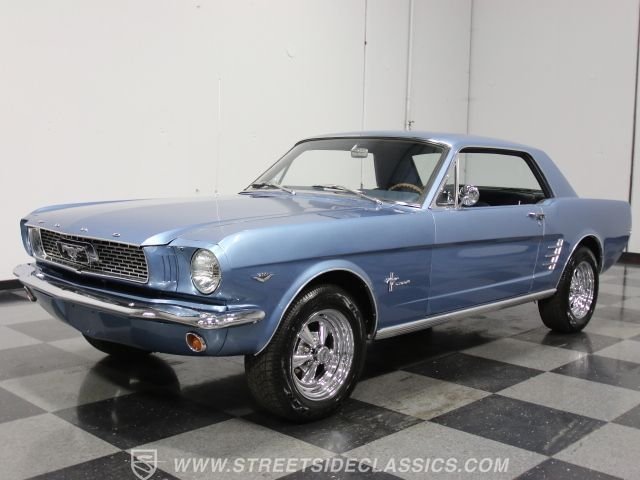 Sometimes you just want a nice Mustang that drives well and doesn't give you headaches. This 1966 coupe is like that, offering a sweet-running 289, a nicely finished interior, and a low-profile paint job that might help keep you out of trouble, it's exactly the right car for someone who likes to drive their vintage hardware.

You could probably get away with calling it Silver Blue, which was a legitimate 1966 Mustang color, but there's actually a lot of metallic in the finish that definitely makes it stand out in a crowd. This one was originally Candyapple Red, but the blue suits its mission better, because when it was rebuilt, it was built to run. And whatever you want to call it, the soft color accentuates the Mustang's sharp creases. Look how it defines the fender line, which is also highlighted by a contrasting pinstripe. You'll also note that the bodywork was reasonably well done and aside from some minor prep issues and normal signs of use, it still presents quite well. Just a clean, simple little pony that looks pretty good from any angle and doesn't need stripes or spoilers to make a point. In fact, this is an original 6-cylinder car that's been upgraded to V8 power, but the goal seems to have been to keep it looking as OEM as possible. The trim was likely refreshed or replaced when the car was repainted, and both bumpers, the stainless window surrounds, and the pony grille are all in excellent condition, along with the requisite '289' emblems on the front fenders.

A two-tone blue interior with bucket seats wrapped in crinkle vinyl provide a sporty driving environment. Door panels and carpets are quite nice, installed a few years ago when the car was restored and still looking great, and a fat wood-rimmed steering wheel replaces the original plastic piece. The headliner, dash pad, and other soft parts remain in great shape and the woodgrained appliques on the dash add a touch of warmth. Original gauges monitor the V8 engine and all Mustangs received the GT's five-dial instrument panel in 1966. An AM/FM/cassette head unit has been installed but the metal dash has not been modified to accommodate it, so it still looks quite stock. There are minimal signs of wear throughout the interior, and once again it's refreshing to see something that's simply the way Ford built it and not over-restored or modified. Even the trunk still carries an original mat and spare tire with cover.

As I mentioned, this one was born a T-code, but received a proper 289 transplant a few years ago. The V8 makes great noises and its bubbly, bouncy idle unwinds into a wonderful tenor wail as speed increases, mostly thanks to a recent Flowmaster dual exhaust system. A correct chrome air cleaner atop a Holley 4-barrel dominates the top of the engine, but there's black paint on the block and signs of careful and regular maintenance throughout. Underneath, it appears to be highly original and in good order, and the C4 3-speed automatic transmission and 8-inch rear end with 2.80 gears are ideal dance partners. And this was more than just an engine swap, the six cylinder car also received upgraded front disc brakes, 5-lug hubs, and a brand new gas tank, all designed to make it safe as well as entertaining. For period-perfect rolling stock, look no further than the chrome Cragar mags wearing 215/60/15 Goodyear radials.

This is a great-running Mustang coupe with a lot of personality. If you're a fan of hitting the streets and authenticity isn't critical, this is a fun little Mustang at a fantastic price. Call today! 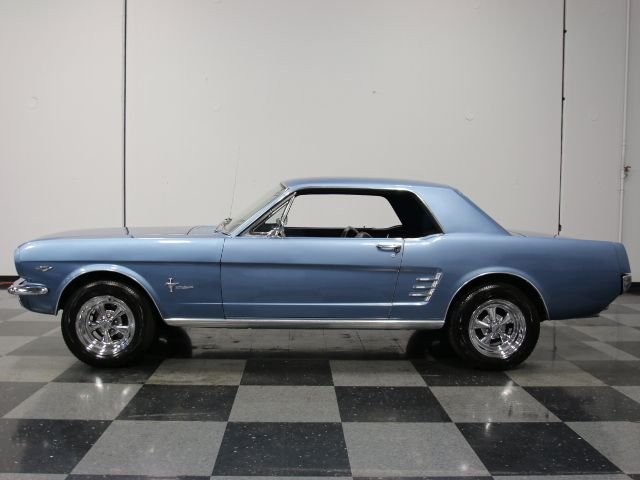