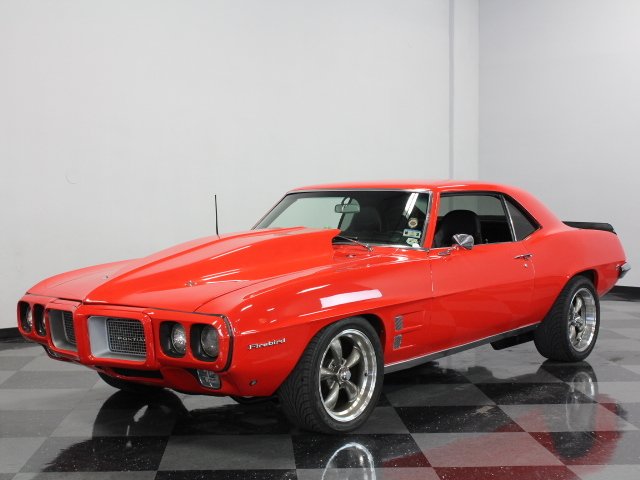 Yeah, this 1969 Firebird is a nasty piece, but you already figured that out, didn't you? With a thundering 455 under the pointed hood, paint that'll make your eyes bleed, and an interior with a full resto-mod makeover, this is the Pontiac that will make you the star of the show everywhere you go-even the race track.

Prior to its transformation, this was just a mild-mannered Firebird with a wheezing 2-barrel carb, no power steering or brakes, and an inoffensive blue-on-blue color scheme. Yeah, that all had to go, and instead it got stripped to the bone and rebuilt, starting with giving it a predatory look. That's Viper Red, and you know those guys don't mess with subtlety, they go straight for the jugular with the in-your-face brightness of the paint. A 5-inch cowl induction hood, which can look silly on anything that isn't running 7-second quarter-mile times, gives this particular Firebird an outrageously sinister looks and emphasizes the pointed snout that made Pontiac famous in the '60s. The tail panel is blacked out and matches the ducktail spoiler above it, and those trick Firebird-shaped side marker lights were retained. You want a badass car that looks the part, you'll not find one nastier than this.

For serious driving, it's hard to concentrate when you're slipping around on flat-faced vinyl buckets like this car's original equipment. In response, they were unceremoniously tossed and replaced by a set of Corbeau carbon-look buckets that hold you in place like a set of vice-grips and aided by a set of 4-point harnesses. The original dashboard remains, but is now stuffed full of Equus white-faced instruments, including a fuel gauge that has been slipped into the driver's side air vent. A custom center console houses a trick Hurst shifter for the automatic underneath, topped by a knob as outrageous as the rest of the car. This sucker definitely has attitude! There's also an AM/FM/CD stereo that's actually usable thanks to extensive use of sound-deadening materials throughout the car. The trunk is nicely finished and perhaps the least outrageous part of the car, offering only a stock mat and no signs of rust.

The original 350 is gone, replaced by a 455 cubic inch Pontiac mill bored .040 oversize and now displacing 462 cubes. A Proform 650 CFM carb feeds an Edelbrock Performer RPM intake, and it makes the most of every molecule of fuel thanks to an MSD ignition system. The big block looks downright sinister sitting in the engine bay, wearing Pontiac Turquoise paint, cast aluminum valve covers, and a billet serpentine belt accessory setup. Making an estimated 425 horsepower, it's potent but docile on the street, and with a massive radiator and twin electric fans, it always keeps its cool. The TH400 3-speed automatic has a 2200 RPM stall converter and shift kit feeding a set of 3.73s on a Posi out back. Hedman headers dump into a custom dual exhaust with Flowmaster Super 44 mufflers, so this thing sounds insane at idle. Staggered 17-inch Torque Thrusts are fitted with 235/45/17 front and 275/40/17 rear Nexen radials.

Outrageous to look at and a blast to drive, this well-sorted and fully developed resto-mod kicks in the door and becomes the life of the party everywhere it goes. Call today! 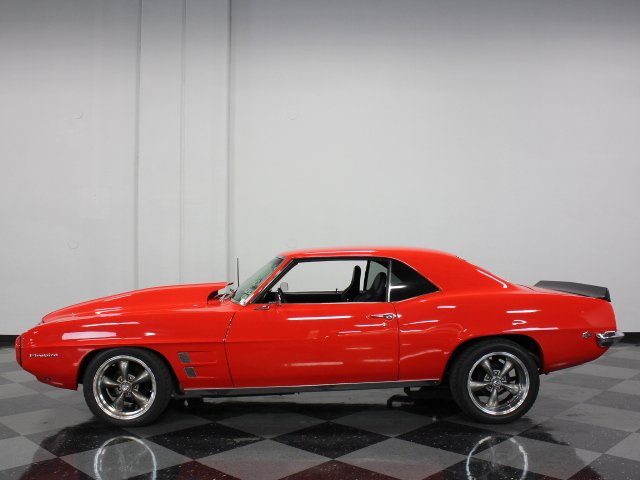