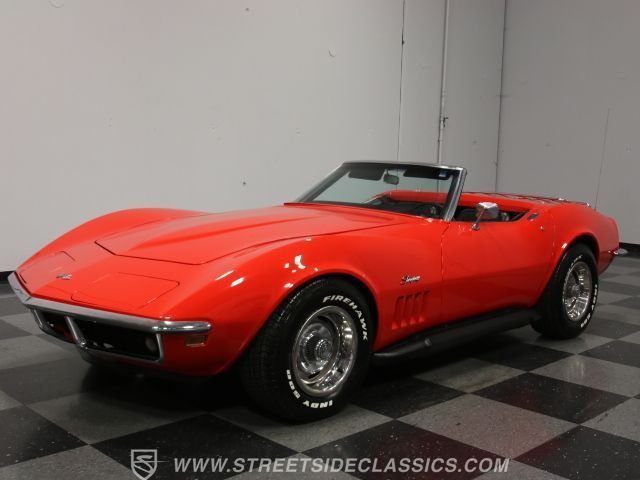 This Monza Red 1969 Chevrolet Corvette convertible needs a new home. It's a great hobby car, what with its swoopy good looks, bright paint, and rumbling 350/4-speed combination underneath, not to mention a top that goes down. Who wouldn't love such a beast in their garage? So make this the year that you finally get into the game with this very affordable Corvette roadster.

Maybe I'm just a sucker for red cars, but this Corvette looks fast just sitting still. Embodying all that's great about the C3 design: chrome bumpers, side pipes, a folding top, and a great color, it's also just right for cruising and having fun. Feel like taking the long way home from work? This is your ideal companion. It's happy to oblige, since it's not some over-restored trailer queen, but instead a nicely preserved, honest car that wears its minor marks with pride, because it has been driven. The fiberglass is in great shape with no noteworthy issues, so no worries in that department, and although the repaint was done several years ago (it was originally code 976 Lemans Blue), you'll never be ashamed to be seen behind the wheel. The fiberglass underneath is in good order with only a few very minor cracks around the headlights in the usual spots, but nothing that requires attention. The rumble of the exhaust matches its high-performance look, and no matter where you go, you'll probably find that this car engenders respect for its performance capabilities.

A black interior is always the right choice with red bodywork, and the Corvette delivered a state-of-the-art driving experience in 1969. The interior was replaced a few years ago, because it, too, was originally blue, but all the replacement pieces are correct Corvette items. As a color change, there are a few original parts that were repainted to match the black upholstery, and they might be showing some age, but with a little TLC, this could really be a first-rate 'Vette inside. The important stuff is all there, including a chrome shifter managing the 4-speed between the seats and a newer AM/FM/CD stereo right in front of it. The gauges remain in original condition, with sharp markings and clear lenses, making the driver's seat a very enjoyable place to spend some time. And note that this car includes both a black convertible top as well as the optional removable hardtop, a highly desirable and somewhat rare option.

Tilt the hood forward and you'll find a rebuilt 350 that isn't pretending to be something it is. Instead, it's a nice-looking piece that was built to run, with finned Z/28 style valve covers, a chrome air cleaner, and a bit of chrome on the accessories. It runs like the best small blocks do, with a snarky exhaust note compliments of the headers and side pipes, and if you were really picky, spend a Saturday detailing it to really take it up a notch. Power steering makes this a very user-friendly Corvette, even around town and it still retains its original ignition shielding, something that got tossed on a lot of these cars. The chassis shows no signs of trouble and plenty of evidence that this car was never used in inclement weather up north. New hardware on the brakes and suspension suggest that it has been serviced in the not-too-distant past and it wears classic Rally wheels with fat 255/60/15 Firestone radials at all four corners.

For a nice summer toy, you can scarcely do better than a vintage Corvette. Reliable, fun, and affordable, this one is ready to follow you home. Call today! 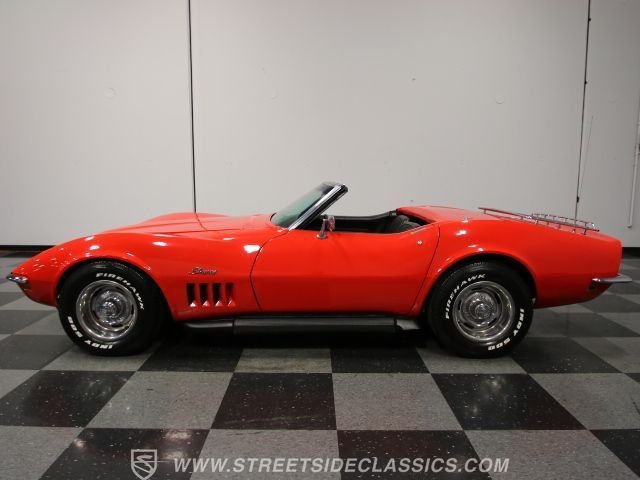