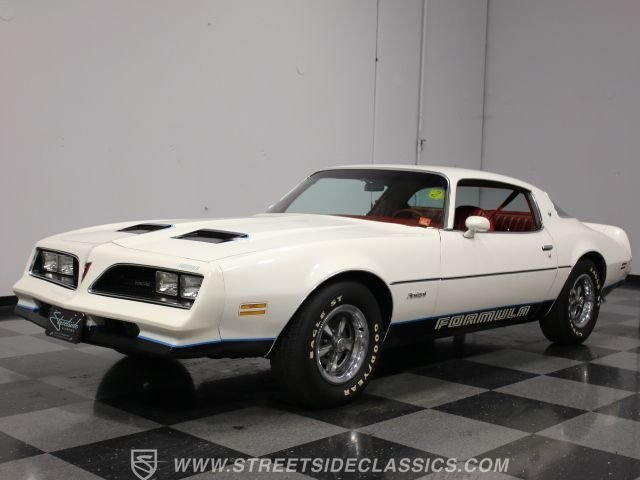 Rest assured that in 1977, there were still guys who wanted big performance without the extroverted look of the Trans Am. That's why this 1977 Firebird Formula 400 was built. This super original car packs it's numbers-matching 400, a 4-speed, and untouched factory paint and interior to make one heck of a rare survivor.

Estimates put production of 4-speed Formula 400s under 1000 cars, making this white coupe a very rare find. In fact, that's factory-applied paint and it's in remarkable condition, although with what we believe to be just over 17,000 original miles on the clock, it really shouldn't be a surprise. The Formula skipped the Trans Am's spoilers and flares, giving the car a very clean, no-nonsense look that works especially well with the all-new nose and hood. The blacked-out lower panel with Formula spelled out in big block letters makes it look longer and lower than it already is and the faux scoops on the hood give it an aggressive look. The paint is quite good, the panels fit exactly where the guys on the assembly line put them, and even the urethane bumper covers are in above-average condition. And yes, it's still a 1977 Pontiac, so they couldn't resist a few stripes and decals, including a 'bird on the rear spoiler, but if you want a little less flash and a little more exclusivity, this Formula is the way to fly.

The brilliant red interior is the high-impact look that made the '70s great, and it looks fantastic even today. The upholstery, carpets, door panels, and dash pad are all original, and even in the photos you can see how beautifully preserved everything is. Sure, there might be a few creases on the driver's seat, but there's absolutely nothing inside this car that needs replacement, although the headliner is recent. The big news is the presence of a 4-speed manual shifter, but other high-performance goodies include the full set of analog gauges with a tach, a tilt steering column, a console, and body-hugging bucket seats. The original AM/FM radio is still in the dash and the trunk is outfitted with its original mat plus a space-saver spare that's never been used. Survivors just don't get much more authentic than this!

The Trans Am had the reputation, but there's an argument to be made that the Formula was faster. This is the original, numbers-matching 400 cubic inch V8, the same 220 horsepower unit that was used in the TA, linked to the same Super T10 4-speed manual and 10-bolt rear end. It's highly detailed under the hood, with corre3ct reproduction hoses, proper tower hose clamps, bright corporate turquoise engine enamel, and no modifications. The low mileage shows everywhere you look and the engine runs superbly, with a crisp burble from the exhaust system, which still carries a factory catalytic converter. The undercarriage is neatly presented with a uniform dusting of satin black, but there's nothing to hide here and it drives almost like a new car. 3.23 gears mean it's comfortable on the highway and it rides on correct Rally II wheels and 225/70/15 Goodyear radials that are just the right size.

This impressive survivor, were it wearing Trans Am regalia, would cost ten thousand dollars more. Instead, why not enjoy the rarity, the preservation, and the performance offered by this incredible Formula 400 survivor. Call today! 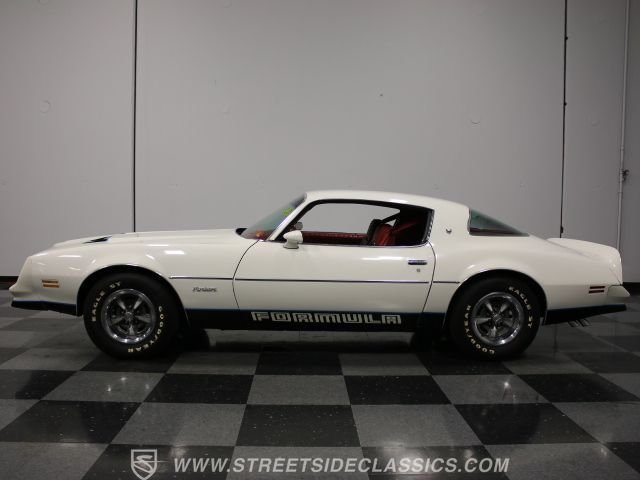