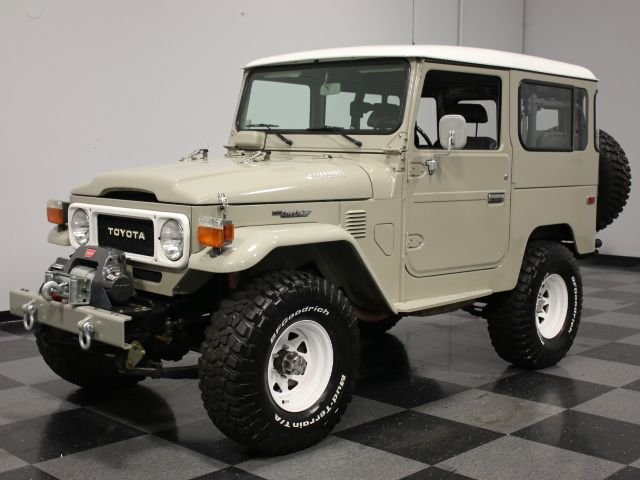 You've seen them racing across deserts, slogging through jungles, and carrying people through some of the most remote areas on Earth. For five decades, trucks like this 1981 Toyota FJ40 Land Cruiser have been the way people get places where others fear to tread, and today they're red-hot collectables with all the off-street cred you'll ever need.

The boxy, upright shape must be the most efficient for going to remote places, because all the great off-roaders share it. The Toyota is a little more butch than most, with a wide stance and snub-nosed attitude that suggests a stubborn resilience. In fact, that describes the Toyota perfectly, since it's as reliable as a mountain goat and just as sure-footed. The traditional gray paint is a slight change from the original light yellow, and it gives the Cruiser that off-road vibe that you see in the National Geographic films. Repainted about 18 months ago, it looks quite good and the bodywork is very straight, suggesting that this FJ hasn't been abused or neglected. The doors and top fit quite well, sealing it up for inclement weather and making it practical for everyday use. The grille is iconic and still echoes in today's FJ Cruiser, flanked by a set of simple flat fenders and a hood that uses spring-loaded hooks to hold it in place. Glass, rubber, and the heavy-duty bumpers are in great shape and it offers some serious hardware like the Warn winch up front, which has never been used but looks suitably butch.

That no-nonsense theme continues inside where basic black is the dominant color, offering a pair of buckets up front and enough cargo room to move your brother out of his apartment. The seat covers are new and duplicate the original pleated patterns, but the rest is spartan, showing off exposed hardware on the door panels and a rubber floor mat designed to be hosed off after an afternoon of fun in the dirt. The dash looks busy, but the controls are simple to use and easy to find without looking, which was entirely the point, and as a late Land Cruiser, it's got a few more comfort and convenience items, including under-dash A/C and a powerful Pioneer AM/FM/iPod radio stashed in the center console. Twin fold-away seats offer extra seating in a pinch and the twin shift levers manage the off-road system and 4-speed gearbox. Someone obviously spent a lot of time restoring this one to factory specs, and it looks awesome.

Power comes from a correct 4.2 liter inline-six, which soldiered on in one form or another for more than two decades. Reliable, torquey, and surprisingly smooth, it was the powerplant of choice when your mechanic was also a goat herder in the desert. Rebuilt about three years ago and detailed with factory-correct finishes, plus a Weber carburetor, it looks, sounds, and feels just like it might have in 1981. The chassis is equally nice, showing evidence of freshened mechanical bits, new springs, heavy-duty shocks, and a correct exhaust system. All the work was done by the pros at 4x4 Happy Tails and Overbuilt Customs, so you know it's right, and thanks to a lifetime in Texas before moving to Florida, it has not been ravaged by the elements. Big 33x12.50-15 BFGoodrich Mud Terrain radials are wrapped around new wheels which have just the right combination of appearance and durability.

It's not every day you get the chance to own an icon, and you either get the Land Cruiser or you don't. If you're one of the folks who do get it, call today! 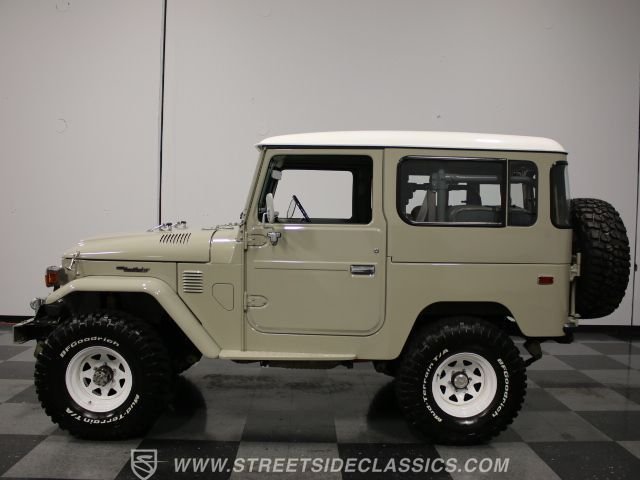