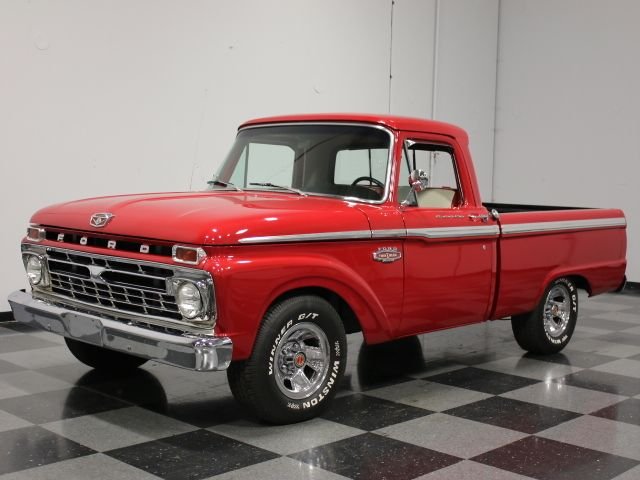 This 1966 Ford F100 is a cool mix of basic truck goodness and very slick custom. The bodywork looks awfully good and very authentic, but the thundering 460 cubic inch engine under the hood suggests something else entirely.

Go try to find an F100 as nice as this; they simply don't exist. Before trucks were cool, these were used up and thrown away, but somehow, somewhere, these guys found an awfully nice one and gave it a high-quality facelift. Look how well that character line traces from the hood, through the doors, then down along the bed sides. It's as straight as a ruler. Note how flush the doors fit, and how nicely the bed tucks up behind the cab. That doesn't just happen, that's the result of hours of tedious hand work. Then put on a bright red finish that looks totally perfect for the mid-60s, and hit the road in style with lots of bright chrome and stainless trim, especially the sweep-spears along the flanks. Try to find a straight bumper or a perfect grille for one of these, too...talk about scarce! Of course, they didn't forget that this was still a truck, so while the bed is as nicely finished as the body, it's still ready, willing, and able to work. Just on first glance, this truck is a slam-dunk.

That vibe extends inside where it has been artfully updated to create a comfortable and stylish driving environment. The power bench seat was borrowed from a later vehicle and fitted with twin fold-down armrests so you fit better behind the wheel, then covered in red and white vinyl that's actually quite comfortable. The door panels have been finished to match, and the original dash was painted to harmonize with the body, then wrapped in black vinyl for a low-glare look while driving. A later Ford steering column and steering wheel have been fitted so it looks a little bit custom, and there's an AM/FM/cassette stereo in the center of the dash so you don't have to suffer with AM radio only. Black carpets keep it from being red overload and help control noise and heat, making this truck a vehicle you could drive every day.

Ford's workhorse 352 cubic inch V8 engine is long gone, but you won't miss it once you see the monstrous 460 Police Interceptor they stuffed in there instead. Combined with a C6 automatic transmission and a 9-inch axle out back, it's a rugged powertrain that will always get you where you need to go. Topped with a 750 CFM Holley carburetor, Edelbrock Performer 460 intake manifold, and chrome valve covers, it looks as potent as it is. Power steering and power brakes mean you can cruise without breaking a sweat, and there's just no sign of neglect anywhere on this truck. The chassis is relatively stock, making this one heck of a sleeper, although the rumbling Flowmaster dual exhaust system might give you away at stop lights. 15-inch chrome were taken from a late-model as well, and now wear fat 255/70/15 white-letter radials to hook it up.

This is a very cool truck that you won't see at every show. Nicely finished with a metric ton of performance, it proves that good taste never goes out of style. Call today! 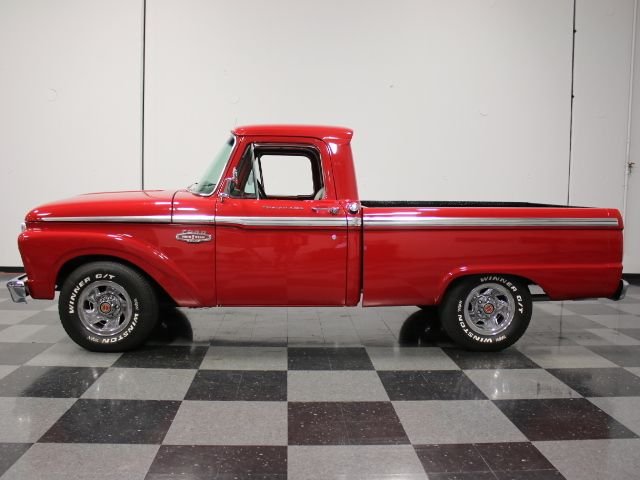