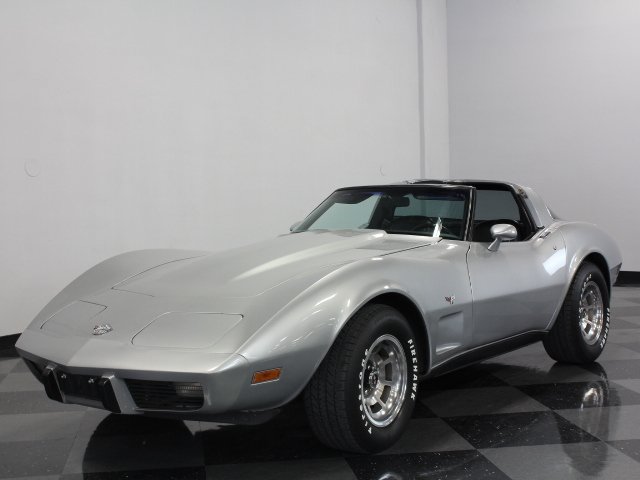 Another Anniversary Corvette, you say? Maybe, but look again. This one not only sports its original silver paint and factory-installed L48 engine, but a gorgeous black leather interior as well. With just 41,738 original miles, it's the perfect balance of well-preserved originality and affordability.

The silver paint downplays the Sting Ray's dramatic look, but the designers chose it for the anniversary models on purpose. It's sophisticated, not loud, and emphasizes the Corvette's best features, which are those dramatic "Coke bottle" fenders. The fastback roofline was new, and not only improved aerodynamics but increased cargo capacity, making the Corvette a car that was truly able to be used daily. Showing such low mileage, however, this one was never a daily driver, and is exceptionally clean inside and out. The thirty-four year old paint still looks fresh, and the nicely maintained surface has a glow that now modern repaint could ever match. You'll note that the front and rear bumper covers are in excellent condition and they don't quite match, which means they're original, too-they came from their suppliers already painted and rarely matched the bodywork, even when new. There are not many all-original Anniversary Corvettes that look this good, no matter how low their mileage.

That black leather interior I mentioned earlier is flat-out gorgeous. While most Anniversary models received the standard silver leather buckets, black was available but seldom chosen. Looking at the lovely interior of this 'Vette, I'm puzzled as to why because it's simply amazing. It's also all original, and shows only light wear, most notably on the driver's side, but it's quite minor and gives the seats the look of your favorite black leather jacket. Matching door panels, a steering wheel wrapped in the same leather, and a center console that looks like it belongs in a luxury car instead of a Corvette complete the ensemble. Everything works as it should, including the ice cold A/C, power windows, power locks, and the original AM/FM stereo radio. Overhead, removable T-tops give you the open-air experience and you can take them with you thanks to a neat storage system in the rear hatch area.

The original, numbers-matching L48 350 remains under the hood in essentially untouched, factory-correct condition. The engine is a smooth, torquey small block that made the Corvette one of the most potent cars you could buy in 1978, such as it was. This one is nicely preserved, too, so you'll be proud to tilt the hood forward and show it off, and it appears that the block has been more recently repainted in the original light blue. A TH350 three-speed automatic transmission was the only choice in '78, and it shifts perfectly and doesn't leak, something that can't be said for a lot of those 0-mile '78 Corvettes you see for sale all the time. The chassis isn't detailed for show any longer, but it has never seen snow, and includes original items such as the catalytic converter and most of the exhaust system. And, of course, it rides on the original machined aluminum wheels wearing wide 255/60/15 Firestone Firehawk radials.

This is a beautifully presented Anniversary Corvette with no issues and a rare interior that really stands out. Call today! 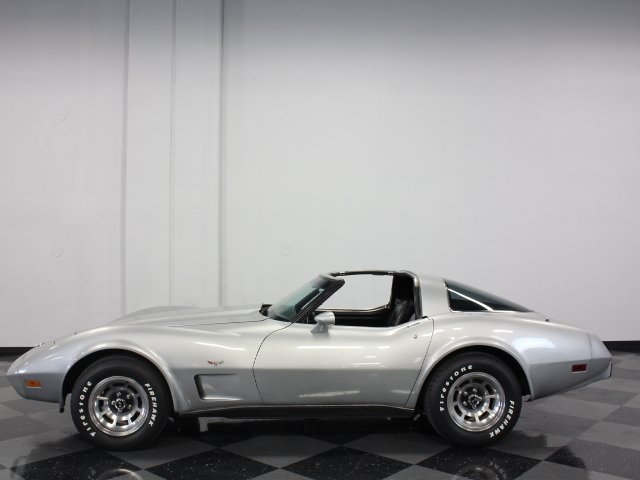