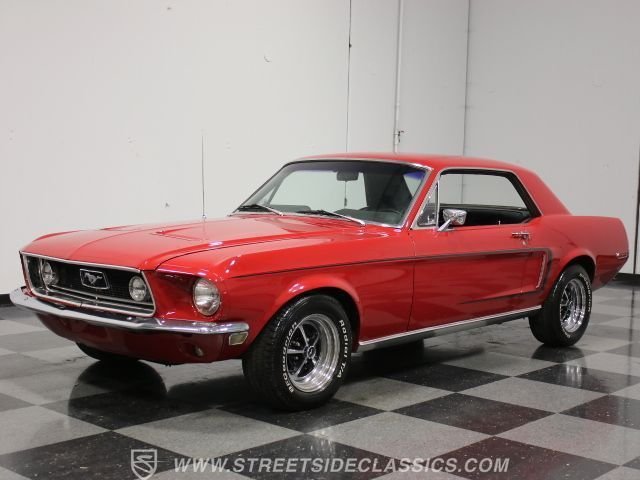 The recipe is simple: take one vintage Mustang, add a V8, fill it with accessories, then dress it in bright red paint. In reality, the application of the recipe is somewhat more challenging, but this 1968 Ford Mustang coupe absolutely nails it.

So it started out as a six-cylinder snoozer, who cares? This pony isn't about numbers-chasing, it's about traditional Mustang performance. And a big part of that appeal is making one of the greatest designs of all time into something that makes people stop in their tracks. This sizzling red Mustang is arguably over-restored, since no 1968 Mustang ever had paint this shiny on the showroom floor, and it's quite fresh, having been completed in February 2015. Look closely and you'll find a few minor flaws, but I'm pleased to see that they let the original shape speak for itself, and it speaks beautifully. Gaps are excellent, the panels are straight, and there aren't many Americans who can't imagine themselves behind the wheel of this coupe. Chrome and stainless is quite good, giving this coupe a high-quality look that isn't just an illusion, with some parts, such as the door handles, likely being original.

The fairly stock look inside is a result of blending original and reproduction pieces seamlessly to give it a very inviting look. Most of the soft components are new, including the seat covers and carpets, while the door panels also appear to be new and inserted into original door skins. Obviously the wood-rimmed steering wheel isn't original, but that seems to be the only major deviation from stock and it looks fantastic. You're going to love the center console, which houses the automatic shifter and the factory "garage door" storage area up front, adding a very sporty look. This car originally had A/C, and the whole system has been upgraded with modern components, just like the radio which is an AM/FM/cassette unit that has been very neatly nestled into the original dash. And one glance in the trunk is proof that this car has probably led an easy life, because that sure looks like the original trunk mat back there.

The 200 cubic inch inline-six is long gone, replaced by a strong-running 302 cubic inch V8, an engine for which became the base V8 in the Mustang. Equipped with a finned Cobra dress-up kit, the car delivers on the performance promises made by the brilliant red paint. It's mostly stock, but the intake manifold is topped by a Holley 4-barrel carburetor, and the block has been bathed in proper Ford Blue paint. Details like the tower hose clamps are authentic-looking, while the A/C system is entirely new and the structure is reinforced with an export brace. The C4 3-speed automatic transmission shifts crisply and makes this an effortless cruiser and power steering is always a welcome feature in an early Mustang. A mellow-sounding dual exhaust system gives it that traditional 5.0 sound and with air shocks out back, it's easy to fine-tune the ride and handling. Period Magnum 500 wheels look right and carry fresh 225/60/14 BFGoodrich radials.

This is the Mustang you've been dreaming about since you were nine years old. Go ahead; at this price, it's about time you owned a Mustang. Give us a call today! 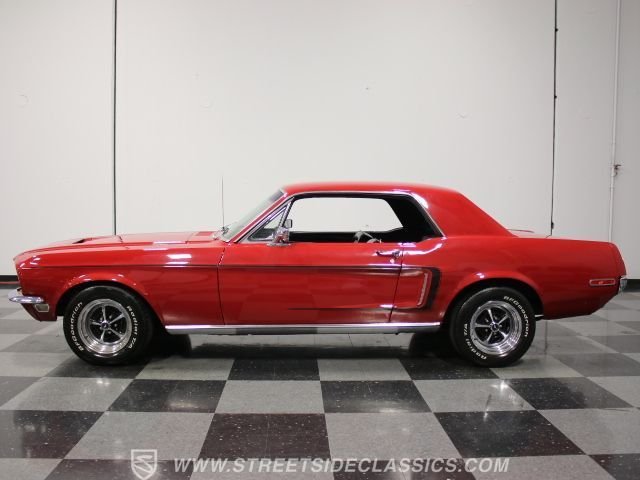