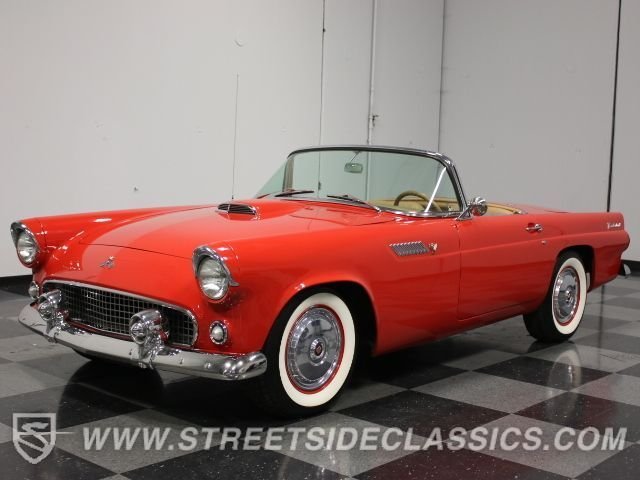 Two-seat Thunderbirds are nice enough cars, but this familiar-looking 1955 Ford Thunderbird packs a high-tech punch that will absolutely blow you away. Someone has brilliantly transplanted the 32-valve heart of a Mark VIII Continental and its cosseting interior into America's favorite Ford, and the result is something altogether amazing.

The amount of work that went into this build is immense, but you'd hardly know anything was unusual from the look of the exterior. Seeing a 'Bird without skirts isn't typical in many of today's restos, but that's actually how they came because the familiar skirts were an option, not standard equipment. As a result, this one looks pretty correct wearing its Torch Red paint and clean 1955 lines that are remarkably free of ornamentation and heavy-handed chrome. The bodywork is straight and everything lines up quite well, particularly for a 1955 Thunderbird, and it's obvious that a good deal of money was spent on the cosmetics. It's showing some signs of enjoyment because this really is a 'Bird that was built to fly, but there are no major demerits or flaws. Quite honestly, the look of this Baby Bird is great, but most interest will be paid the moment you peer under the hood and into the cabin. But cruising down the road, you'll be the envy of every other motorist because you'll have the world's biggest grin on your face.

So the interior is where some really remarkable things have happened. 90% of a Lincoln Mark VIII's guts were transplanted into the 2-seat Thunderbird cockpit and it looks completely OEM in every way. It's almost as if Ford engineers traveled 40 years into the future and stole some parts and dropped them into place here. The tan leather buckets, the center console, the custom door panels that seamlessly wrap into the Mark VIII dash, all of it looks like it was born here. There's more, because the Mark VIII's tilt column and steering wheel made the trip, too, along with all the gauges and vents, with the center stack neatly angled towards the driver. Even the Lincoln's AM/FM/cassette stereo still lives in the center of the dash, joined by a set of manual A/C controls from Vintage Air, so it all works right. There's a bit of wear and a few signs of use, but the gee-whiz factor of this interior can't be underestimated. There's a matching tan convertible top and the trunk has been lined with carpet and custom Thunderbird side panels, plus a full-sized spare.

The Mark VIII's 4.6 liter DOHC V8 also made the trip, and it's a neat fit in the T-Bird's engine bay. A custom radiator hooks it up, there's a conical air filter up front, but the rest looks totally OEM, including the plastic shroud that gives it a very finished look. It starts easily thanks to OEM fuel injection and the smooth, seamless flow of power from this engine is a sensation that you'll have to experience for yourself. The Mark's 4-speed automatic overdrive transmission made the trip, too, and drives the 'Bird's original 9-inch rear end, so it's an incredible highway flyer that never gets tired. A custom dual exhaust system gives it a subtle V8 burble and there's a new gas tank, fresh shocks, and 205/75/15 whitewall radials to keep it all looking like 1955.

This is an incredibly impressive build that easily cost several times the asking price. If you appreciate resto-mods, this one absolutely nails it. Call today! 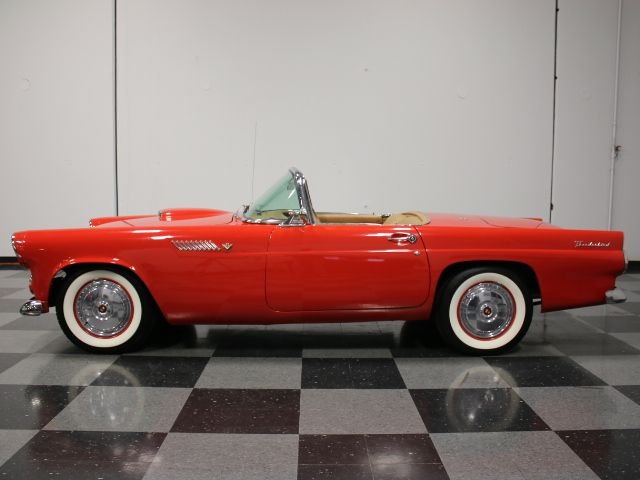