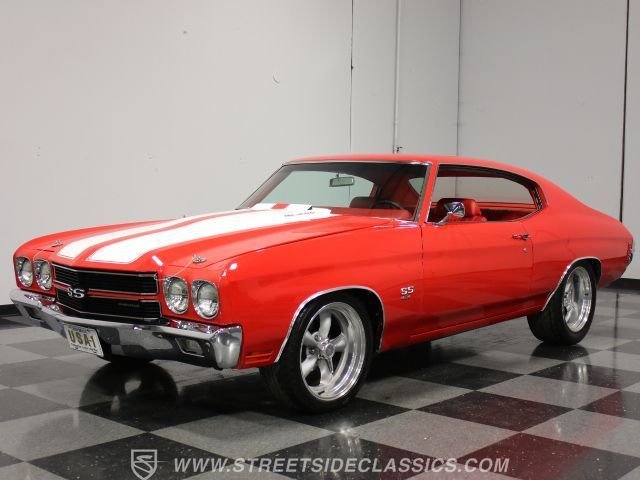 Admit it, you've been looking enviously at cars just like this at all the cruise nights this summer, haven't you? This 454-powered 1970 Chevelle SS is exactly the kind of car that populates those local shows and that you hear hammering down the road late at night. Isn't it time you started joining in on the fun?

The vivid red paint isn't quite the exact shade of Cranberry Red that the factory would have used (it's actually uber-popular Guards Red borrowed from Porsche), but it sure looks awesome thanks to a respray that was done a few years ago. There's no question that this car is an attention-getter, and it gives the brutal big block Chevelle the right look given the performance lurking underneath. The finish on this one is actually quite good, with decent panel alignment, great gaps, and attention to detail that says it was more than just a quickie job. They were SS stripes are mandatory on a car like this, and they've been blended in under the clear for a seamless look that will last practically forever. A cowl induction hood with hood pins gives it that aggressive look that you've always admired, while an SS grille, reproduction badges, and a proper insert on the rear bumper ensure it won't be mistaken for anything else. And there's no denying that those '454' badges are earned, so be ready for every kid to want to have a go at you on the street (don't worry, this one's packing enough heat to handle it).

The gorgeous bright red bucket seat interior is a rare find and now that you've seen it, I bet you like it more than the usual black, right? Almost everything inside this car that's red is brand new, including the seat covers, carpets, and door panels, all of which look extremely OEM. Original gauges, including a tach and a clock, remain in the dash and do their job quite well, and the A/C system was upgraded with components from Vintage Air, so it's reliable and effective. The shifter is a familiar horseshoe setup, but you'll note that it now manages four forward gears rather than three thanks to a custom quadrant in the console. The original wheel sits on a tilt steering column, a somewhat rare option on Chevelles, and the factory AM/FM radio is still in the dash. In back, the trunk is correctly dressed in spatter-finish paint with a correct mat and full-sized spare that's never been used.

The engine is a 454 cubic inch big block crate motor that clearly shows off where all the money was spent. Kudos to the builder for not trying to pass it off as an LS6, especially with power steering, but it looks quite flashy wearing Chevy Orange paint and those chrome valve covers. The firewall has been smoothed, all the wiring has been carefully stashed out of sight, and the serpentine belt drive system up front makes for a very clean presentation under the hood. Hedman ceramic-coated long-tube headers add a few extra ponies and definitely bolster the big block's robust torque curve, and a Flowmaster exhaust system provides one heck of a soundtrack. Twist the key and it settles almost instantly into an easy idle, and throttle response is right-now quick. With a 700R4 4-speed automatic and a fresh 12-bolt, it's a top-notch highway car without giving up its punch around town. 18-inch Torque Thrust-style wheels have gray-painted centers to reproduce that old-school look and ride inside staggered 224/40/18 and 295/45/18 Nitto performance radials.

If you're tired of going to the ball park without a glove, this 1970 Chevelle is your chance to get in the game in a big way. Call today! 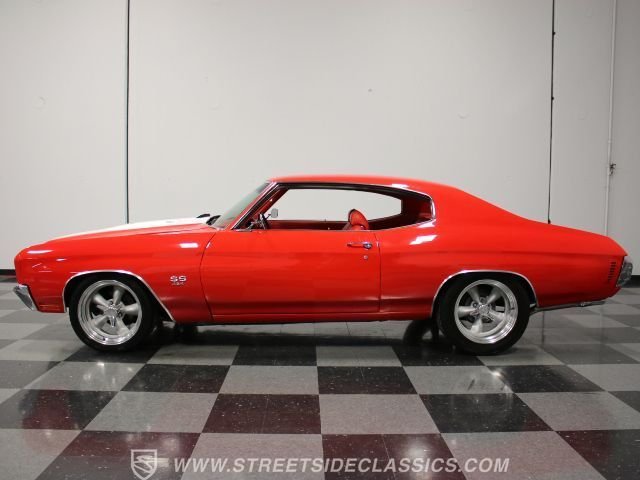