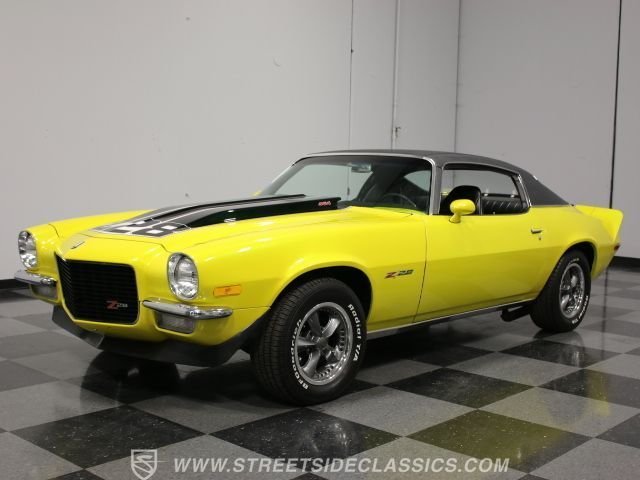 There seems to be an undeniable fact in the hobby right now: Second-generation Camaros are red hot, and this awesome 1970 Z/28 tribute is a spectacular resto-mod that definitely brings the heat. With a big 454 cubic inch engine, incredible bodywork, and that timeless look, this is the Z/28 for guys who love to drive.

The government hadn't yet gotten around to emasculating the muscle cars in 1970, and there wasn't a better-handling American car on the market than the Z/28 Camaro. Finished in brilliant pearl Daytona Yellow with pearl black stripes (continued into the dash) and cool Z28 graphics, it's definitely in-your-face, but it backs up the look with all the right hardware. Workmanship is very good and you can see how straight this one is just from the photos where the reflections in the surface suggest someone sanded that bodywork until their fingers bled. You can get a better idea of how carefully assembled this one is by checking the alignment of the deck lid spoiler, which fits better than even the factory could manage. The aggressive look is certainly helped by the chin spoiler up front as well as the blacked-out grille that had been a part of Chevy's performance look for years. Chrome is excellent, and those emblems on the flanks aren't decals but rather carefully airbrushed replicas that give this car an extremely polished look.

The all-new Camaro interior was a slam-dunk in 1970, and this car's modifications put it over the top. The original buckets remain, now fitted with new seat covers in the original materials and patterns; after all, it's hard to do it better than the factory. The wrap-around instrument panel still carries the factory speedo and tach, but a set of aftermarket gauges have been very professionally installed the outer holes. You'll note that the top of the dash has been painted to match the bodywork, right down to the stripes, so it have a very complete look. Steering is via a factory-style 3-spoke wheel and that horseshoe shifter looks right at home in the console. The factory AM/FM radio is still in place and still fully functional, but I'm guessing that you won't need it very often once you get a taste of the horsepower waiting under the hood. You'll also be pleased to find a full-sized spare and jack assembly in the trunk, which also comes with a reproduction mat.

Take a look under the hood and you can easily see where big money was spent. That's a built 454 cubic inch V8 that fits so well you'd think the factory put it there. Upgrades include an Edelbrock intake manifold and 4-barrel carburetor, long-tube headers for a nice, fat torque curve, and a bit of a cam inside to give it the thump-thump-thump sound of a proper big block. A chrome air cleaner, polished aluminum valve covers, and a chrome radiator shroud brighten up the black engine bay, but there's no question this sucker was built for combat. It's backed by a TH350 3-speed automatic transmission and a 10-bolt rear end, and you'll undoubtedly discover that there aren't many cars on the road today that can keep up with this F-body. The recent dual exhaust system sounds downright predatory and it rolls on a set of Foose wheels with charcoal centers that almost look like the original SS wheels and now wearing 235/60/15 BFGoodrich T/A radials.

Second-generation Camaros have crossed over from runners-up to legitimate collectables, and this bright yellow Z/28 packs a few surprises, too. Call today! 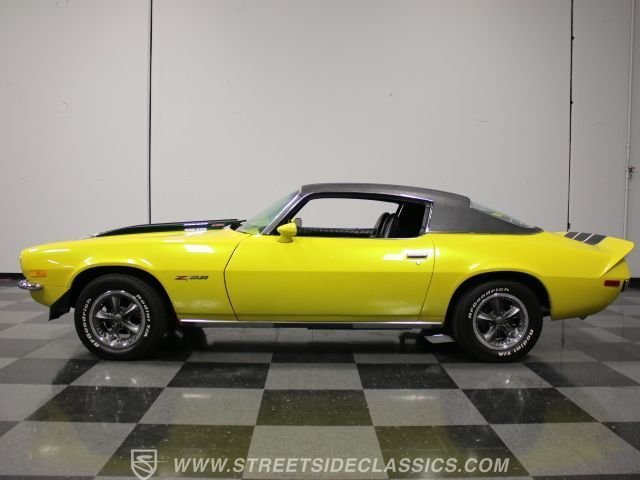