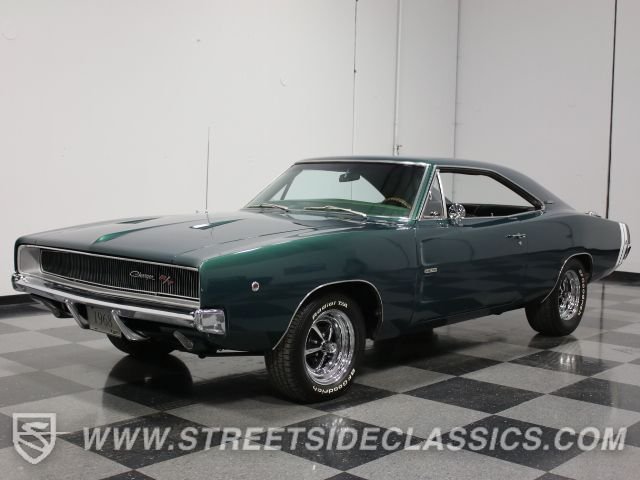 Before we go into too many details, I'm going to tell you right now that if you hesitate, you're going to miss this car. The 1968 Dodge Charger R/T is always one of the most popular vehicles we sell, and when it's equipped with a Hemi like this one is, finished in a cool color combination, and price so affordably, well, it's a safe bet that this one won't last.

The color is from a late-model color palette but there's probably no color that makes a Charger look bad. If there's a better-looking muscle car than this, I don't know what it might be, from the hidden headlights to the jet exhaust taillights, it looks like nothing else from the muscle car era. The shine makes it look great from any angle, and while the finish is a few years old, good workmanship means that it still looks ready to head out for a night at your favorite cruise-in. White bumblebee stripes on the tail are a Mopar trademark that works especially well on the Charger's long quarter panels and no car has ever worn flying buttresses better than the Charger. There's a metallic shine to the paint that accentuates the car's many curves and angles in a most attractive way, and there are no side marker lights yet devised that are cooler than the little round ones used here. Bright chrome bumpers, the little 'HEMI' badges on the doors, and a blacked-out tail panel are all pieces of the equation that make this Charger so special.

The '68 Chargers are also special because of their upholstery, which features horizontal slits of contrasting material in the seating surfaces. Buckets and a console are important considerations on a purchase like this, and the fat wood-rimmed steering wheel gives it a period performance look that also warms things up a bit. Factory Rallye gauges are joined by a tachometer strapped to the steering column, although the original Tick-Tock-Tach is still in place. The handsome green dash pad works well with the green seats and door panels, while black carpets keep it from being overwhelming. An AM/FM radio fits neatly in the center of the dash and uses Chrysler's unique thumb-wheel style tuning and while this car originally was equipped with 3-on-the-tree shifting (rather rare in itself) the automatic transmission now uses a familiar chrome shifter. One of the Charger's virtues is trunk space, and the cargo area of this car is nicely finished with a reproduction mat that fits well.

The car originally used a wheezing 318, but during the restoration a few years ago, the sizeable engine bay was stuffed with a 426 cubic inch Hemi V8, complete with aluminum heads. It's actually a lot more flexible than a factory Hemi might have been and the performance more than backs up the horsepower claims. It's based on a 2468330 casting and is topped with a Mopar Performance intake manifold, Demon carburetor, and electronic ignition system, so it's ready to rock. A big transmission cooler with braided lines helps protect the 727 TorqueFlite 3-speed automatic transmission from the Hemi's power and it exhales through a great-sounding Flowmaster system that looks fairly fresh. Classic Magnum 500 wheels are the absolute best choice on a vintage Charger and they're wrapped in 225/60/15 front and 275/60/15 rear BFGoodrich T/A radials.

Anything with a Hemi remains a hot property, but stuffing one inside a 1968 Charger makes for a package few Mopar fans are able to resist. Call today! 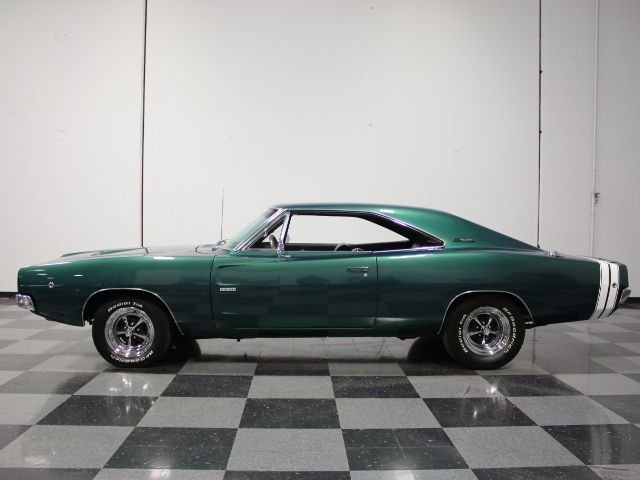