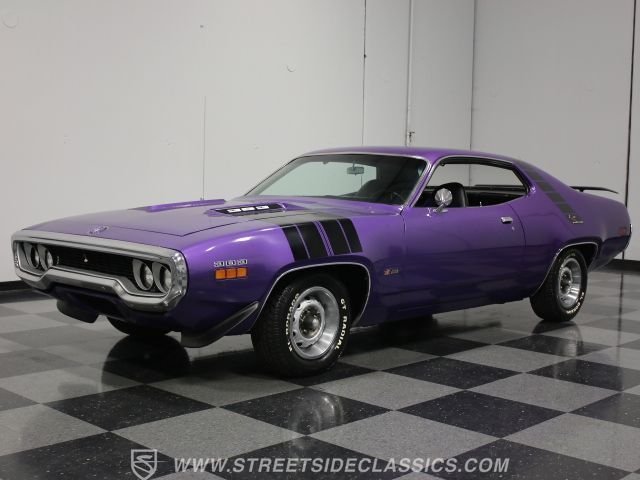 We have seen that the fuselage styling on this 1971 Plymouth Road Runner is becoming as popular as the first-generation cars, and there's no denying that any piece of Mopar muscle in Plum Crazy, and one packing a big block under the hood, is going to be a party on four wheels. This California-bred 'Beeper has been restored as needed over the past four decades, making it a car you can drive without worries and still get the flavor of the original.

That vivid Plum Crazy Purple paint is only a few months old and they not only captured just the right hue, but it has a soft gloss like the original enamel, so it looks very authentic. Obviously this was a very straight, clean car before the paint job and aside from a few very minor signs of use, it looks great in person. A correct set of black vinyl decals were added to give it the right muscle car look and they match the Go-Wing out back, which is practically mandatory on these cars. Proper Road Runner decals were also installed on the deck lid and there's a set of '383' emblems on the front fenders to match those on the hood, just in case anyone wasn't paying attention. The bumpers are original and their condition should tell you all you need to know about the easy life this car has led. If you like these cars, you need to spend some time with this one.

The interior is in great shape, including the seats, dashboard, and door panels, and again, it speaks to the quality and preservation of the car. Given the extroverted bodywork, the gray and black interior is more subtle, but still has a racy vibe. There are a few signs of use, of course, as this car was built to be driven, although the carpets were done within the last year and fit well. The factory gauges should look familiar to anyone who has driven a vintage Mopar and they're joined by a set of auxiliary gauges under the dash in the usual location, along with a tachometer. A pistol-grip shifter is one of the best features of any manual-transmission Chrysler product of the era and is linked to a slick-shifting 4-speed manual transmission. The original AM radio is still in the dash, although it has finally given up the ghost and an upgrade would probably be a welcome addition. The trunk is also correctly finished with a brand new spare and jack assembly with mat.

With 383 cubic inches on tap, this car is a blast to drive around town. Effortless torque and a fantastic sound mean that you'll be grabbing a downshift every chance you get. It's also quite nicely detailed under the hood, with Hemi Orange on the block, wrinkle-finish paint on the air cleaner, and reproduction decals throughout. The distinctive exhaust manifolds are in good condition and feed a new dual exhaust system that's not too loud and not too soft, so it's a pleasure to drive on the highway. There's a 650 CFM Holley double-pumper up top, along with all new belts, hoses, wires, a fresh starter, and a correct radiator up front. The car's California roots show underneath, where it's in great condition with no major issues and it's got exactly the right stance on those Rallye wheels with 235/60/15 white-letter radials.

If you're into driving and turning heads, this Road Runner delivers big block fun at a reasonable price. Call today! 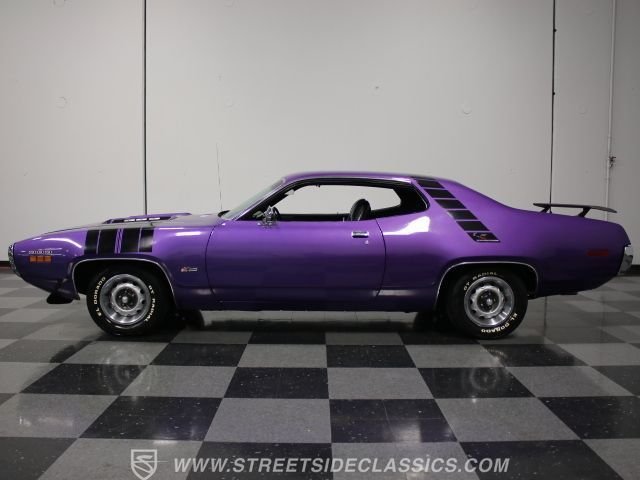