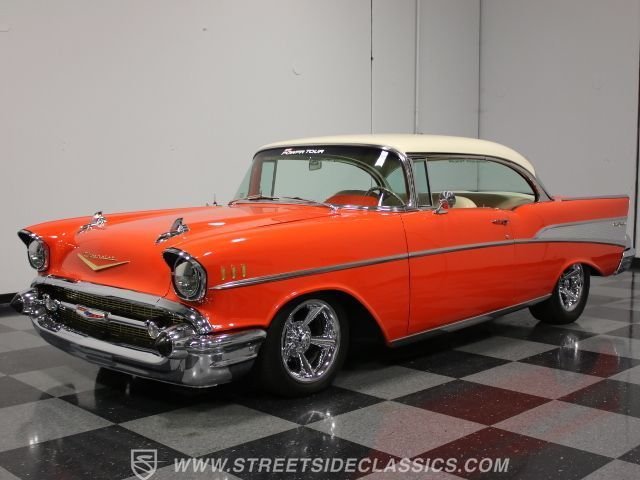 Some of the best custom cars are those that don't mess with the original styling. This 1957 Chevrolet Bel Air hardtop looks pretty stock at first glance. Sure, it's lowered and has some flashy wheels, but it's only after you look under the skin that the extent of the modifications become apparent, and wow, are they impressive! How about a fuel injected big block, a leather-lined interior, and all the modern conveniences. The best of both worlds? You bet!

When you imagine a '57 Chevy, something very similar to this Matador Red Bel Air hardtop probably springs to mind. And that's for a very good reason, because it's perhaps the #1 most popular hobby car of the '50s, and surely one of the top five of all time. It's got just the right combination of elegance, flash, and practicality that makes these Bel Airs popular year after year. At any rate, this one is beautifully finished, which is relatively easy when you start with a west coast car that spent its life in the desert. It's all original sheetmetal with lots of time and money invested to get it into better-than-new condition throughout. That Matador Red paint is now two-stage urethane, so the shine is miles deep and expertly rendered, but without that modern look. A contrasting off-white top is a nice touch that softens the car a bit and further blurs the line between stock and modified. All the famous Bel Air trim, including the anodized side panels and gold-toned emblems on the nose and tail, was fully restored and reinstalled to give it a spectacular, glittering look that will be recognized everywhere it goes.

Once you open the door, you'll see just how substantial the modifications really are. The creamy leather seats are borrowed from a late-model Monte Carlo, so they're power actuated and supremely comfortable, but the ministrations of expert upholsterers have rendered them all but unrecognizable. A custom center console was created to house the 6-speed manual shifter and a pair of A/C vents and the door panels are beautifully sculpted to tie it all together. Reportedly, all this amazing work cost $10,000, and you can see where the money was spent. There's a custom wheel that looks a lot like the original, a set of white-faced gauges that fit neatly in the original gauge panel, and a body-colored dashboard that keeps the clean OEM look. The console extends to the back seat and neatly bisects the bench, and all the usual features are included: A/C, a tilt steering column, and a powerful AM/FM/CD stereo system. The trunk was also expertly finished in matching tan carpets and it includes a full-sized spare with jack.

The engine is a thundering 502 Ramjet V8 from GM Performance. With fuel injection, it runs and drives like a stocker but the big block's mighty torque makes this full-sized Bel Air feel like it weighs thousands of pounds less. Drenched in chrome and polished aluminum, the engine bay is literally stuffed with engine, but there's also good service access and things like power steering and power brakes are part of the deal. The front suspension is from Jim Meyers Racing which includes rack-and-pinion steering and coil-over shocks, while the rear end is a built Moser 12-bolt with 3.42 gears inside. In between, you'll find a Richmond 6-speed manual transmission that's a blast to run through the gears. A custom Flowmaster exhaust gives voice to all 570 horsepower on tap and the stance is just about perfect with those big 17-inch wheels and 225/50/17 front and 265/50/17 rear BFGoodrich T/A radials.

This is an extremely impressive Bel Air that retains everything that's great about the original and turns up the rest to 11. Call today! 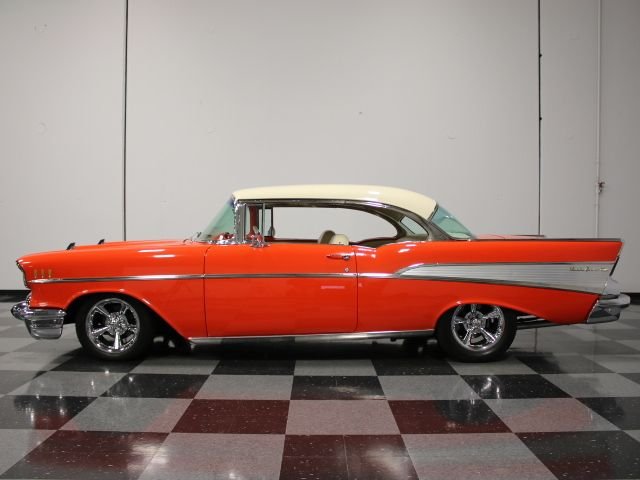