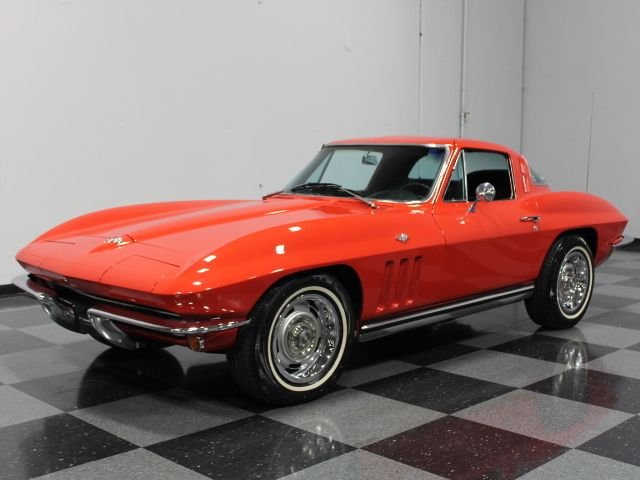 Blue chip investments don't get much more interesting than a mid-year Corvette. This 1965 coupe carries a matching-numbers L75 327 and a beautifully restored Rally Red body, and remains one of the most user-friendly C2 Corvettes we've seen. For investments under $50,000, it's hard to do better than an investment you can drive.

This isn't one of those trailer-queen 'Vettes that you're afraid to drive, either. Refinished several years ago in code U Rally Red (original color was code X Goldwood Yellow), it once again proves the old adage that there's nothing quite like a bright red Corvette. The Sting Ray was one of the most influential designs of the decade, and even fifty years later, it remains instantly recognizable and still resonates with hobbyists. This '65 hits the sweet spot, with a nice patina that shows well and looks great for the car's age, without the hassles that come from trying to maintain a show car's finish. At any Corvette show, you can spot the guys who drive their cars pretty easily; they're the ones with the giant grins on their faces, and you could join them without worries in this one. The chrome is quite nice, the stainless has been polished up, and the glass is in great shape.

The body tag says the interior is "standard," but the lovely and comfortable black buckets are anything but ordinary. They have a lovely patina and signs of gentle use that make it ever so inviting to slide behind that woodgrained wheel. This is one of those cars that fans lovingly call "worn in, not worn out." Of course, there's no damage, no split seams, no scuffs on the seating surfaces, so it only adds to the car's usability, and A/C makes it eminently usable as a long-distance cruiser. The gauges all appear to be original and they all work like they should, keeping an eye on the strong-running small block up front. Overhead the headliner is taut while the carpets show almost no wear thanks to bright red floor mats protecting them, although the carpets in back are a little faded thanks to the massive rear window. There's an original (and somewhat rare) AM/FM radio in the center with its unusual vertical orientation, and the shifter for the PowerGlide 2-speed automatic does a pretty good impersonation of a manual lever.

The car's original, numbers-matching 327 remains under the hood, and shows a correct HF suffix code indicative of a 300 horsepower L75. Finished in correct Chevy Orange with a chrome-topped air cleaner, it isn't over-restored and doesn't outshine the rest of the car. Instead, the clever restorer was careful to keep the car's overall look and feel intact while renewing the parts that truly matter. There's a big aluminum radiator up front, an Edelbrock carburetor, and modern A/C components, all dedicated to reliability. The PowerGlide shifts with typical precision and the four wheel disc brakes that became standard equipment just a year earlier give this car impressive stopping power. There's also a dual master cylinder with a fresh power brake booster and a recent reproduction exhaust system gives it just the right sound that's aggressive but never annoying. Refreshingly, this one also carries stock Rally wheels with right-sized 215/70/15 whitewall radials.

If you've been dreaming of a C2 Corvette, this one is the perfect combination of driver and pedigree, so you can enjoy it without worrying about driving the value out of it. Call today! 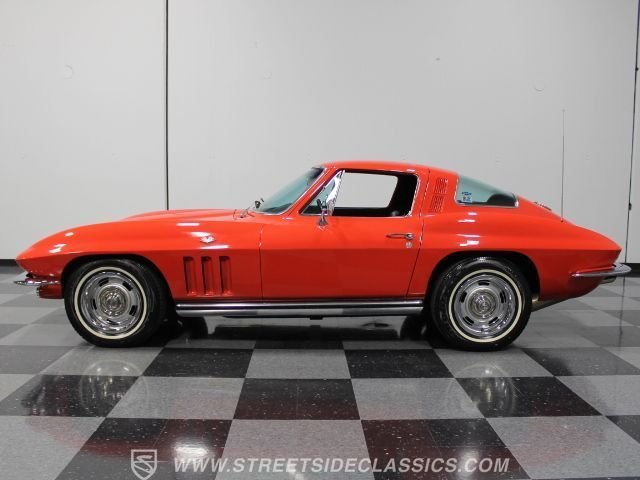