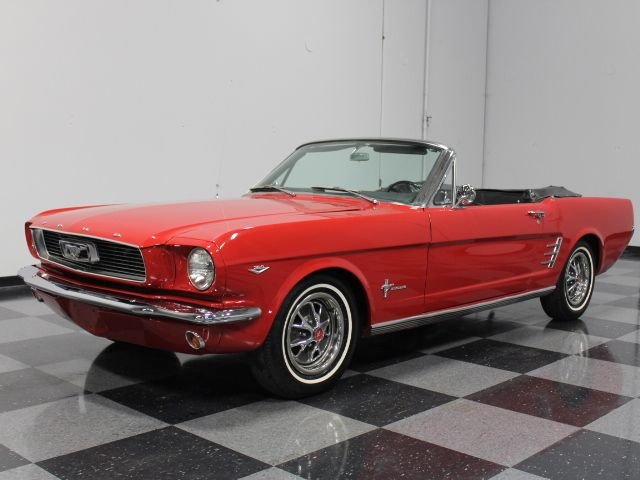 Everyone can agree that a bright red Mustang convertible is about as good as open-air motoring gets, and this 1966 Mustang convertible remains a high-quality cruiser that is instantly recognizable everywhere you go. With a powerful 289 cubic inch V8 and a four-barrel carburetor, it's fast on its feet, and carries a host of desirable options including an automatic transmission, A/C, a power top, and gorgeous styled steel wheels.

Ford didn't make many changes to the Mustang for 1966; after all, why mess with success? It was already the fastest-selling car in history, with over a million units sold, and Mustang fever was still in high gear by the time the new model year rolled around. And except for maybe Wimbledon White, there isn't a better color on an early Mustang than code 26 Candyapple Red. Paint and bodywork is nicely done, and the car shows signs of excellent care since restoration, with only a few minor blemishes here and there to prove that it's been driven and enjoyed. Gaps and alignment are up to factory standards, and while it never carried a lot of ornamentation, many regard the simplified 1966 models as the cleanest of the early Mustangs. Chrome is good, including the new-for-1966 grille that featured horizontal bars in place of 1965's honeycomb pattern and a "corral" that now floated instead of being suspended on four bars.

Inside, this pony sports an ultra-rare bench set, which was optional but very seldom ordered. It does a pretty good impersonation of buckets, but with a fold-down armrest in the center and room for a third front passenger in a pinch. Ford used the "comfort weave" material on the seating surfaces, and as a convertible with black seats, you'll appreciate it after a long day at the beach. Door panels and the dash are in good condition, and the carpets are so nice that they have to be newer. Obviously, the bench seat precludes the use of a console, but there's original-style A/C hanging under the dash and thanks to fresh hardware working behind the scenes, it's pretty effective today. The original AM radio is still in the dash and it's been augmented with pony floor mats to keep things tidy. Overhead, a power black convertible top was installed not too long ago, and folds nicely into its well where it's covered by a matching black vinyl boot.

Ford's reliable and perky 289 cubic inch V8 moves the lightweight Mustang enthusiastically, thanks to a 4-barrel carburetor up top and a great-sounding dual exhaust system. The engine bay is tidy but not over-detailed, so you shouldn't be afraid to put this one on the road. However, it does wear a coat of Ford Blue paint, a correct air cleaner with a 289 decal, and it is equipped with such niceties as power steering and brakes. These engines are extremely reliable, parts are readily available, and performance is very good, making it a joy to drive. The chassis is proof of an easy life in a warm climate, and the C4 3-speed automatic transmission and 8-inch rear end show recent service. For the ideal period look, this car also wears a set of ever-popular styled steel wheels and 195/75/14 whitewall radials.

With V8 power and a folding top, this Mustang is near the top of the desirability list, and it is in ideal condition for someone who likes to drive his cars. When you're behind the wheel of an early Mustang, the world is a much happier place. Call today! 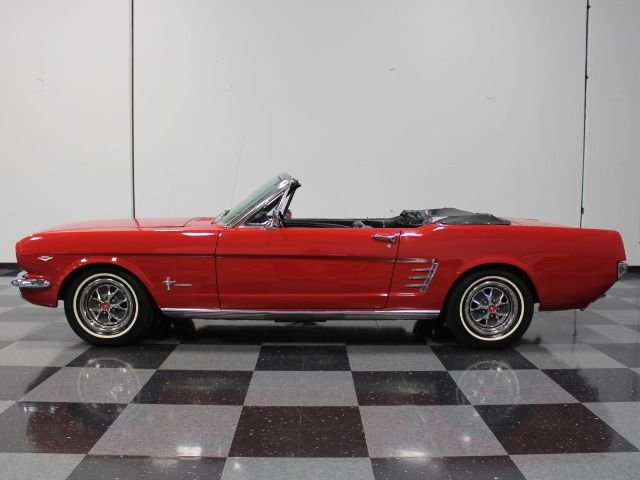