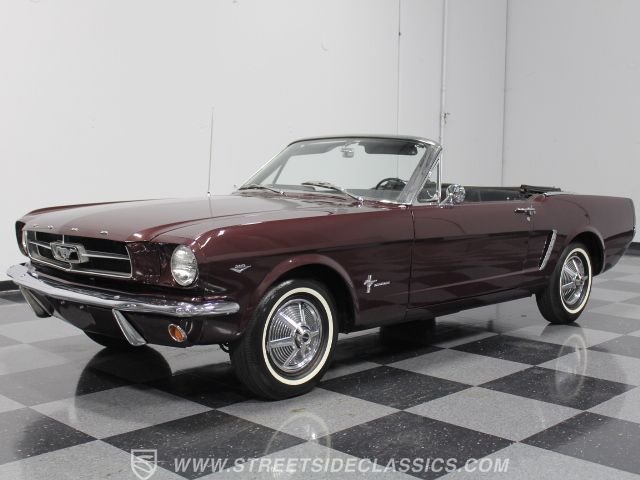 Early Mustangs are great cars and great Mustangs are those with awesome color combinations, V8 engines, and a rock-solid pedigree like this 1965 Mustang convertible. With the same owner since 1973 and featuring a restoration that was done around 2000, this C-code convertible delivers all the fun you'd expect from America's first pony car.

Vintage Burgundy is among the most elegant Mustang colors, and combined with the black interior it makes for a car that everyone can agree looks fantastic. This particular Mustang has always led a good life and from the beginning it was treated as something special. However, even the most carefully maintained cars are going to start to show their age sooner or later, and after 35 years of enjoyment, you know this one has been freshened. In 1985 it was repainted and then in 2000, it got a more comprehensive restoration. They kept everything stock, of course, but freshened it to look new and even today it looks fantastic. There might be a few signs of age and use, but nobody will argue that this Mustang isn't desirable. Much of the chrome and stainless is original, and the stuff that was replaced fits right in without looking too new, and they were wise to leave it as the factory delivered it rather than "upgrading" it to become something it's not.

The black interior was also freshened but sticks to the factory specs. Nice black seat covers show minor comfort marks but very little wear despite a few years of fun. A center console in an early Mustang really adds an upscale feel and combined with the standard 3-spoke steering wheel, it looks properly sporting when you're inside. Black carpets are in excellent order thanks to a set of black Mustang-logo floor mats and the original instruments, while a little faded, still monitor the engine. It doesn't have a lot of options and add-ons, but it does include the basics that make Mustangs so beloved, plus an AM radio and a power convertible top, both of which make having fun in the sun easy. And speaking of the top, it's a relatively recent black vinyl setup with a crystal clear rear window, but given that this car has only seen rain a handful of time, it's almost superfluous. The trunk is outfitted with a reproduction mat and spare tire cover, so it looks right, too.

The original C-code 289 cubic inch V8 was rebuilt and detailed for show during the restoration and still looks fantastic today. Even better, thanks to a rebuilt 2-barrel carburetor, it's a strong runner that has great torque and a pleasing V8 sound from the single exhaust pipe out back. As an early 1965 car, it has a correct black-painted engine with gold tinwork and all the little stuff like the hoses and clamps, hardware, and even the decals, are exact replicas of the original equipment. Mustangs are relatively light cars, but if you've driven one without power steering, you'll be grateful for the factory power steering on this one, which makes parking lot maneuvering a lot easier. The C4 3-speed automatic and tall 2.80 gears make it a superlative highway car that's just built for road trips. Standard steel wheels with hubcaps and vintage-looking 6.95x14 whitewalls complete the early look that's exactly right.

Not over-restored, not a faked-up GT, just a clean, honest Mustang ragtop with a great history. If you've been looking for a good one to drive and enjoy, this is an excellent choice. Call today! 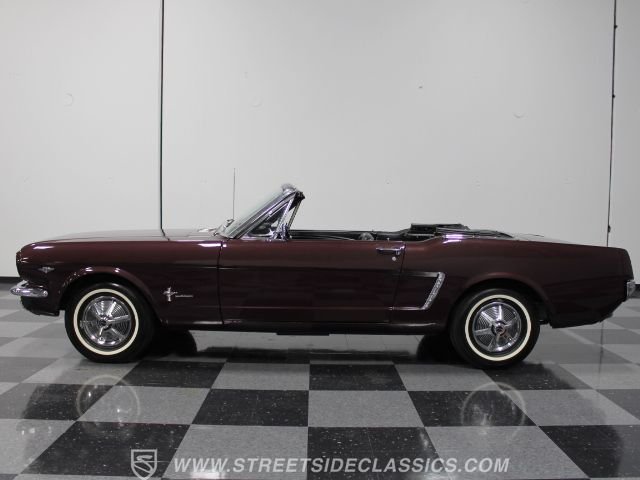