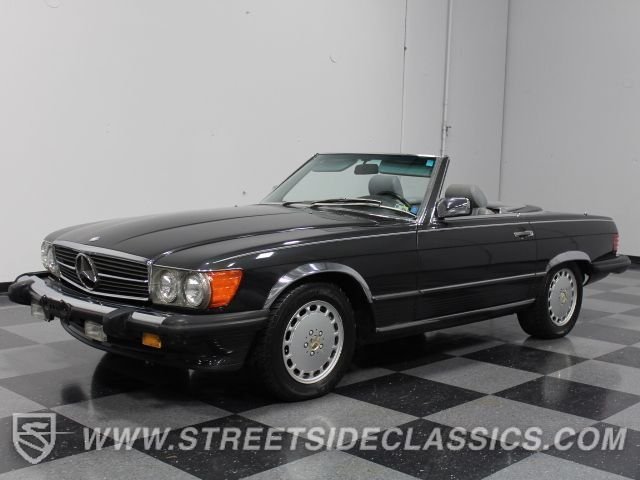 There are many who feel that the R107 SLs were the last of the engineered Mercedes-Benz automobiles. After that, the cars were more mainstream, and the engineers were joined by the marketing department, and the slogan "Engineered like no other car" fell by the wayside. This gorgeous black 1988 560SL represents the last of the best, a low-mileage survivor that proves why these cars are still wonderful machines that truly deserve their honored reputations.

If you could afford one of these, it meant you had well and truly arrived, and that you cared about smart investing as much as making a good first impression Of course, nobody will ever argue with black, as it looks fantastic no matter what kind of car it's attached to. On a grand tourer such as this, it almost looks sinister and certainly gives the 2-seat SL an air of importance. It has led an easy life in a warm climate, and with just 43,302 miles on the clock, it is just getting broken-in. Panel gaps are exemplary and the trim fits with a precision that was typical of Mercedes-Benz quality of the era. The heavy chrome and rubber bumpers were an unfortunate by-product of federal regulations, but they, too, add to the car's appeal with their purposeful look, as if Mercedes didn't care about appearance as much as function, which was 100% true. 1988 was near the end of R107 production, and it received a slender third brake light at the trailing edge of the deck lid, a big improvement over the clunky CHMSL on earlier models, and this car also received chrome fender lip moldings, a popular accessory that really dresses up the all-black roadster.

The luscious gray interior is incredibly inviting and looks upscale even in today's world, and it's a very rare option. The leather used in these cars is not only lovely to look at, but wears like iron, and the bucket seats have a comfortable look while still being supportive and firm. Matching light gray carpets look unaffected by the sun's rays or dirty shoes, protected as they are by a set of monogrammed Mercedes-Benz floor mats that seem to have taken a majority of the abuse. Burled walnut on the console and dash warms up the interior without detracting from the all-business controls and the layout should be familiar to anyone who has driven a R107. The bold gauges are visible through the massive steering wheel that makes you feel like you're at the helm of something substantial, and in true Mercedes fashion, everything works as it should. This car also offers two tops, a canvas folding roof and a color-matched hardtop.

The final evolution of the 5.6 liter SOHC V8 was designed to run for hundreds of thousands of miles with only routine maintenance, and with only 43,302 original miles, this one is still fresh. With a bubbly, bouncy idle and seemingly limitless reserves of torque, it moves the two-seat roadster effortlessly without the high-strung theatrics of lesser machines. Maintenance is critical to these cars' health, and as a one-owner car, the care it has received is obvious; just have a look under the hood and you'll see that it's almost new. A 4-speed automatic transmission swaps gears unobtrusively, and the supple, all-independent suspension is willing to dance, but is equally comfortable on long stretches of highway. Traditional MB alloy wheels wearing 215/60/15 Bridgestone radials adroitly straddle the ride/performance equation.

Renowned for their engineering, cars like this SL are a reminder of when the gap between the ordinary and the extraordinary was wide indeed. Call today! 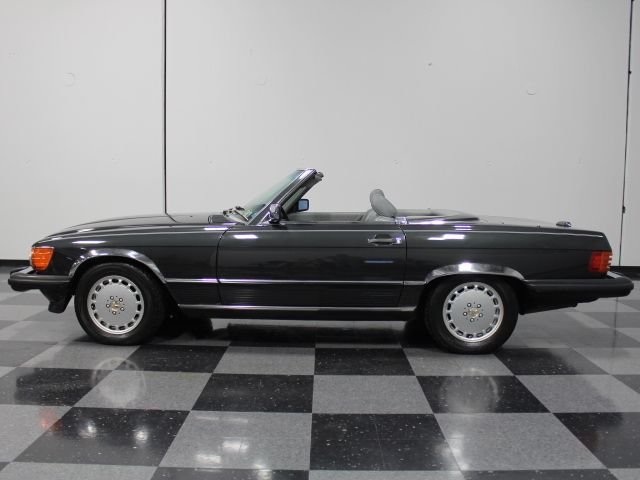