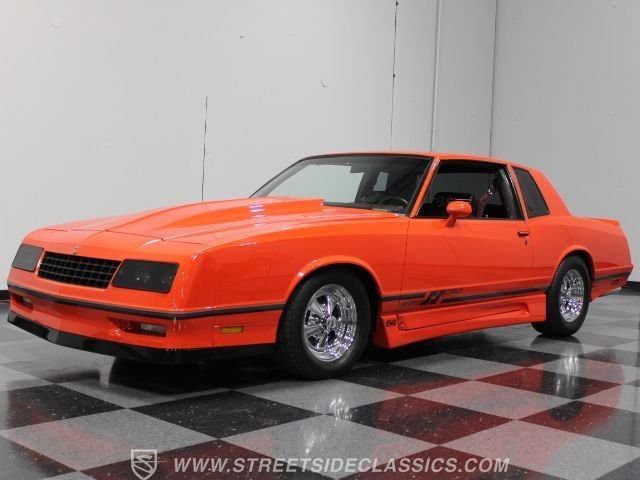 Custom cars are consistently the most interesting segment of the hobby, as varied as the fingerprints of the guys who build them. And while you've seen trick Monte Carlos before, this vivid orange 1985 Chevrolet Monte Carlo SS stands alone as an awesome example of blending OEM parts to get a new result.

Who would have known that the chiseled, formal Monte Carlo would look so good in high-visibility paint? That's PPG Mars Red, surely a relative of Hugger Orange, and it gives the squared-off lines of the Monte Carlo a very sporting look. It also seems to accentuate some of the details you miss when these cars are plain old black or white, namely the gentle sweep of the fenders with a secondary crease running just below the ridge, the smooth integration of the aero nose, and the smooth slope of the rear deck. The SS wore its own aggressive body kit, but this one takes up a notch by dipping into the GM parts bin and pulling out a set of Camaro Z/28 ground effects to visually lower the car. They tie in neatly with the original chin spoiler and the aftermarket skirts behind the wheels, then topped it with a Goodmark cowl induction hood. The paint is extremely well done, showing complete coverage and a brilliant shine with only a few small nicks on the nose to indicate it's ever been used at all. Most of the SS's blacked-out trim remains black for a nice contrast, extra effort that pays off in a big way.

The interior remains pretty much stock Monte Carlo SS, which offers buckets, a console, and plenty of luxury features to go with the sporty look. Light gray accents on the doors, center console, rear seat, and even the floor mats differentiate it from all the other garden-variety Monte Carlos out there. The burgundy velour is in excellent condition and the seats are just the right combination of comfortable and supportive. The gauges are fairly comprehensive given the SS's mission and luxury options include cold A/C with R134a refrigerant, power windows and locks, a tilt steering column, cruise control, and an AM/FM/cassette stereo that still sounds decent. The leather-wrapped wheel helps with the sporty demeanor but if you want to take four people across the country in comfort, few cars will do it better than a Monte Carlo, especially with that giant trunk, which also features matching orange trim.

The stock 305 cubic inch V8 also got a makeover thanks to GM's vast parts interchangeability. Up top there's a Tuned Port Injection setup from a Trans Am and a computer from a Corvette, all dressed for show with a painted plenum and chrome intake runners. It gives the small block a shot of low-end torque that makes it fun to drive around town yet thanks to the 2004R 4-speed automatic overdrive transmission, it still pulls down decent fuel economy. The underside is largely original and in remarkably good condition, indicative of a car that's been in a warm climate all its life, and thanks to a 2-inch lowering all around, it's got an awesome stance. A recent exhaust system sounds great and flashy Cragar wheels with staggered BFG radials give it just the right shot of yesterday and today.

You won't be looking for attention in this car, it'll find you. Fortunately, when it does, it'll also find a very well-built and nicely finished car that runs and drives extremely well. Call today! 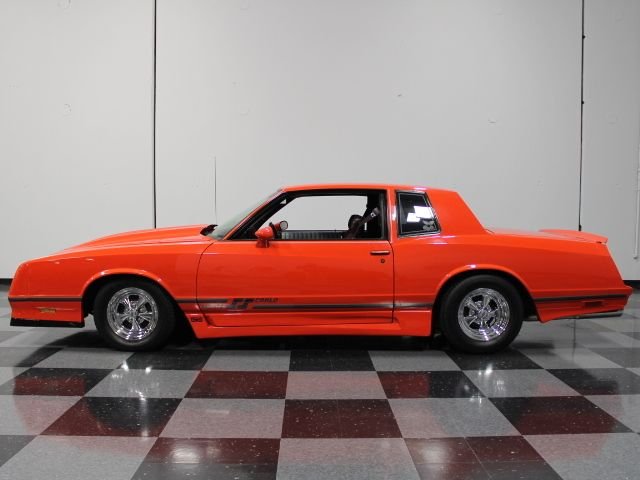