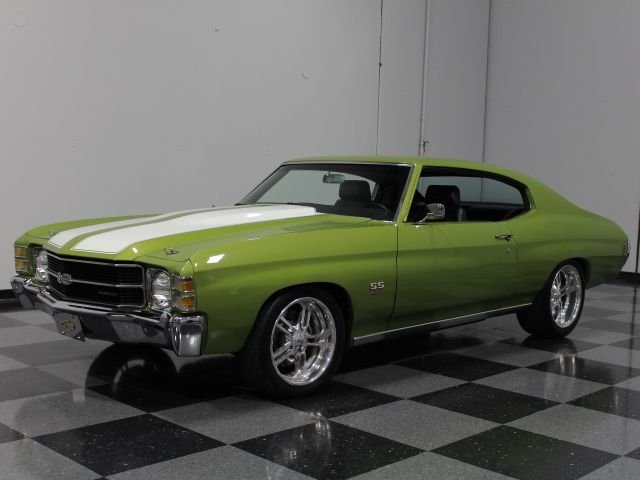 Cars like this 1971 Chevrolet Chevelle always seem to have their priorities straight. Sure, it looks great and the interior's as comfortable as any Chevelle you've seen, but the big dollars live under the skin, making this a seriously fast A-body with a slightly unique look that gets a ton of attention.

Code 43 Lime Green was pretty popular in 1971, and now that it's been re-imagined using modern two-stage urethane it looks pretty amazing, don't you think? A bit out of the ordinary and definitely eye-catching, it gives this brute-force Chevelle a unique look that most folks will really like. The paint was done not too long ago, and while it's not for concours show, it really looks good at the local cruise night and hammering down the highway. Correct white SS stripes on a cowl-induction hood reinforce the performance look and I don't think I'm alone in thinking that the '71 Chevelles are the most attractive of the breed. There are a few flaws here and there, but they're easy to forgive once you hear the engine cackle and with bright chrome and nice detailing, the car still looks awesome from any angle. All the correct SS gear is in place, too, from the blacked-out grille to the small SS badge on the rear bumper, with all signs hinting to an original SS, despite the lack of paper validation.

Modern bucket seats anchor a performance-oriented interior that improves on the already impressive Chevelle setup. More aggressive bolsters hold you in place for performance driving and despite the more modern look, those seats look right at home here, don't they? Even better, the back seat has been upholstered to match, so the entire interior has a very cohesive look and feel. Other upgrades include digital gauges in the original instrument pods, a grant GT steering wheel with a grippy leather rim, and a B&M shifter attached to the original Chevelle console, all showcasing some nice integration. A newer AM/FM/CD stereo system fits in the dash and powers speakers throughout the interior. Fresh carpets, a set of nice-looking SS door panels, and what might be the original headliner round out a rather nicely done interior. The trunk is finished with what appears to be the original mat and spare tire cover, as well as a remote-mounted battery to help with weight distribution.

OK, OK, we're getting to the good stuff. The engine is an all-aluminum Dart big block that's not only potent, but it's also as light as a small block. Nice, right? It's fed by a functioning cold air box that feeds from the cowl induction hood and features a lot of race-grade parts including the aluminum valve covers, braided stainless fuel lines, and an MSD ignition system. The accessories tuck tight to the block and there's a big radiator up front to keep the lightweight big block nice and cool. It's backed by a TH400 3-speed automatic transmission and 12-bolt rear end, so it never complains about the horsepower running through it and the sucker's ferociously fast. Spectacular long-tube headers feed an X-pipe and a brand new dual exhaust system that sounds wicked and the suspension sits exactly right to give it the perfect stance without killing ride quality. Staggered Budnik billet hoops fill the wheel wells with 215/50/17 front and 285/40/18 rear BFGoodrich performance radials.

This is a Chevelle that really puts its money where its mouth is. Big power, bright paint, and no excuses. Call today! 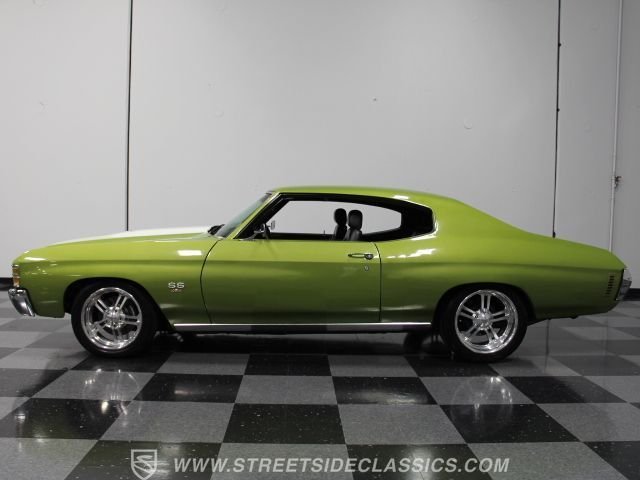