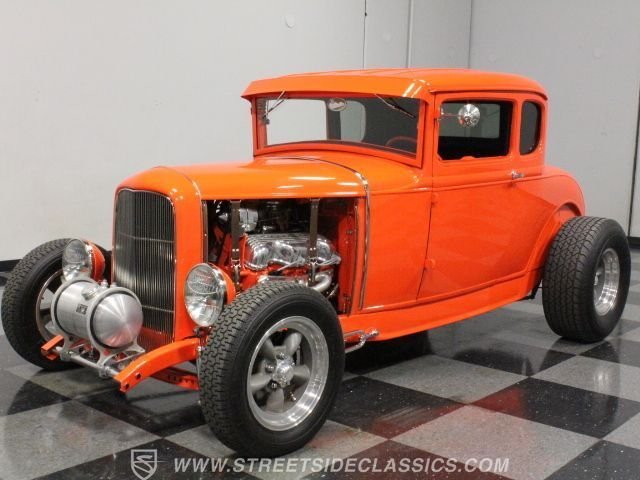 This 1930 Ford 5-window coupe is one of those super-traditional rods that uses all the right vintage parts like a 348 Chevy with dual quads, but the workmanship and amenities are pure 21st century. If you like having your cake and eating it, too, this neat little coupe is for you.

The body is a genuine steel 5-window coupe, chopped and smoothed, but retains the upright good looks of Henry's original design. Henry Ford didn't like red and orange paint because it was expensive, but then again, he probably never saw a bright orange car that looked as good as this one. Someone spent a ton of time on that vintage sheetmetal getting it dead straight and massaging all the details. Quality workmanship shows in things like the belt moldings that remain crisp, the rear fender wells that are now smooth, as well as the little things like the rounded corners on the deck lid and the 1950 Pontiac taillights, which look traditional but are filled with modern LEDs. A '32 Ford grille shell and stainless insert offer a smoother look and those are 1934 Ford commercial headlights and the large size looks great on the diminutive coupe. The roof has been filled and beaded, which not only looks cool but adds strength. Up front, that aluminum Moon Eyes tank was ostensibly used for fuel feed back in the day but today serves as the overflow for the radiator.

The interior is far more luxurious than any Model A ever was, from the leather-covered custom Glide bench seat to the beautifully stitched matching door panels. There's plenty of headroom inside the chopped coupe, thanks to that seat, which also has seat belts for safety. Smoothed and filled, the original dash now carries a neat little billet instrument panel with a complete array of retro-styled gauges from Omega Kustom Instrument Co, highlighted by custom orange lighting. A color-matched banjo-style steering wheel lends it an upscale feel, but just so you don't forget that this car is a weapon on the streets, there's a long Hurst shifter linked to a Tremec TKO500 5-speed manual transmission. A/C has been almost invisibly integrated into the kick panels yet it blows ice cold, giving you the ability to cruise in comfort regardless of the weather. Overhead there's a mini consolette with the AM/FM/CD stereo head unit and it sounds great in the well-insulated coupe.

If you're going to hang your engine out there for everyone to see, it better be something special, and in this case, it's a 348 cubic inch Chevy topped by dual Edelbrock 4-barrel carbs. The distinctive valve cover shape was a hallmark of early Chevrolet performance engines and underneath you'll find an Isky cam, Scorpion roller rockers, and screw-in studs. The supporting cast includes a big radiator in that '32 shell, a set of Sanderson headers that are like industrial artwork, and bright Chevy Orange paint on the block and accessory drive. Custom belts hold the hood in place, which is a very cool retro touch. Power is churned through the aforementioned Tremec 5-speed to a Currie 9-inch rear full of 3.50 gears for easy cruising. Traditional touches include the wishbone front suspension with monoleaf spring from Pete & Jake's, a smoothed and filled frame that's been painted to match the body, and a 4-link out back. The final touch are old-looking Torque Thrust wheels and staggered 165SR15 front and 285/70/15 rear radials.

Just be prepared for all the attention; there's just no sneaking around in a Hugger Orange Model A. Exceptionally well finished, this is a rod that gets everything right. Call today! 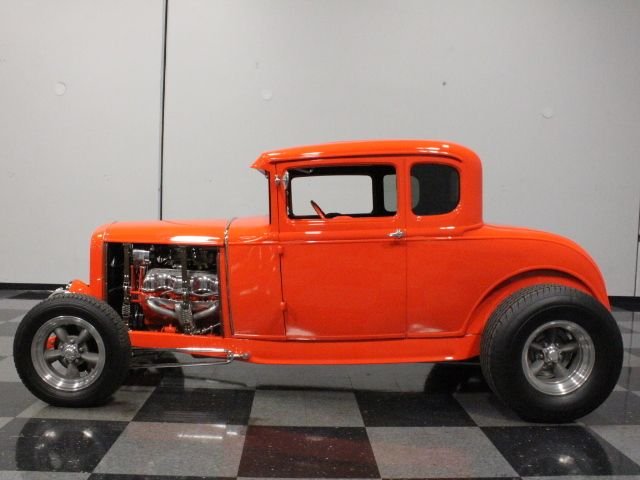