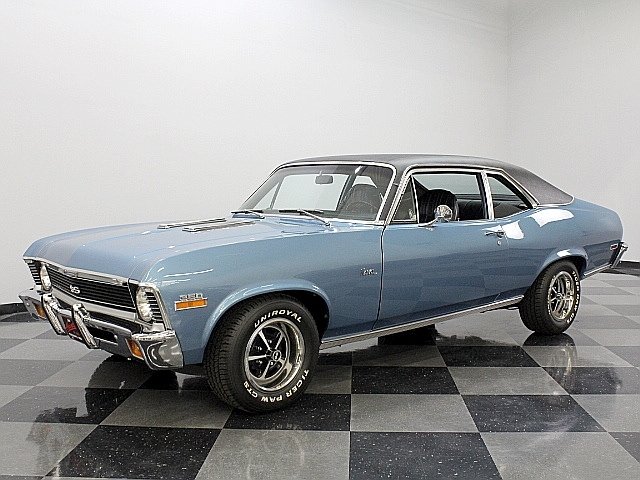 The guys who say performance died after 1970 probably don't even know that cars like this numbers-matching 1972 Chevrolet Nova SS exist. With its original 4-speed gearbox, an out-of-this-world paint job, and enough performance to make a believer out of anyone, it definitely deserves to wear the term "muscle car."

A quick check of the cowl tag reveals that this car wears a correct coat of code 24 Ascot Blue, a subtle and distinguished color that works on the slick Nova sheetmetal. Remember that performance doesn't need to advertise, and with the subdued hue on its flanks, this SS probably hooked a lot of suckers at red lights in the early '70s. And if you grew up in the '80s, you're probably as shocked as I am to see serious money invested in the restoration of a mere Nova, but that's reality today and it turned out spectacularly. Fit and finish are extremely nice, the paint has that impossible shine that only comes from modern urethane with a professional cut and buff, and the black vinyl roof fits as snugly as a bikini at the beach. The chrome bumpers are better than new, and all the stainless has been buffed to a brilliant shine. The days of these cars being low-buck beaters are well and truly over.

Bucket seats, a console, auxiliary gauges including the rare factory tachometer, and all the other muscle car goodies certainly bolster this car's credentials as a bona-fide piece of performance iron. Recent seat covers, nice black carpets that duplicate the factory pattern, and door panels with an original-style woodgrained insert all look right in the slick little 2-door. Original instruments don't give you much info, but the white-faced gauges down on the center console take care of that little detail, just as in the Camaro. A later AM/FM/cassette stereo head unit isn't cutting-edge, but it is most certainly an improvement over the original AM radio that was here in 1972. And the trunk is very nicely finished with a reproduction mat, spare tire with cover, and no signs of trouble underneath.

All 1972 Nova SS models received the L48 350 cubic inch V8 topped by a 4-barrel carburetor and rated at a nice, round 200 horsepower (that's a new net rating, you'll recall). This is the car's original, numbers-matching small block, fully restored to stock specs and dressed in factory-style Chevy Orange paint and a standard air cleaner. Heck, they didn't even bother with a set of aftermarket chrome valve covers. Looking closer, you'll also see the little stuff is correct since this Chevy was built to show, so you have correctly marked hoses, tower hose clamps, cast iron exhaust manifolds, and factory fasteners throughout. The 4-speed transmission is probably quite rare in 1972 and it feeds a 10-bolt rear, as original. A new exhaust system, complete with transverse muffler, gives it a gnarly soundtrack and the chassis looks quite clean and solid, ready to enjoy. Stock SS wheels with 235/60/14 Uniroyal white-letter radials add a sporting look that shouts muscle car, too.

So I'd call this Nova SS a legitimate muscle car. It has the horsepower, the manual gearbox, and the right look, and someone spent a ton of money making it right. That's evidence enough for me. Call today! 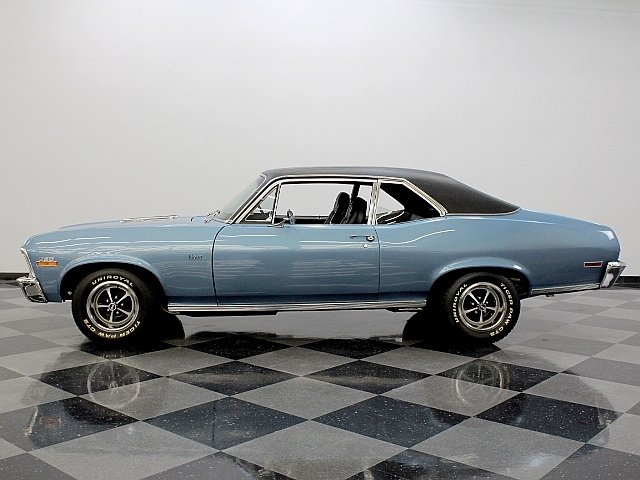