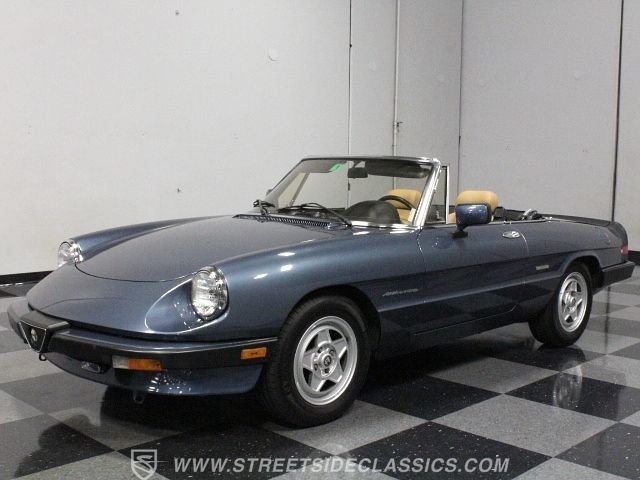 There's a long-standing belief that you can't really call yourself a car guy until you've lovingly suffered ownership of an Alfa Romeo. Well, the suffering part doesn't have to be part of the equation, because this 1986 Spider Veloce turns out to be reliable and easy to maintain while still offering the delightful road manners and thrilling soundtrack that made Alfas the enthusiast's choice for decades.

By 1986, the Spider was getting pretty long in the tooth, but there was an undeniable appeal to what would turn out to be one of the US's last Alfas. The styling was pure Italian roadster and there's still a mystique surrounding Alfa Romeo's triangular grill and coat-of-arms. The pretty medium blue color isn't traditional Alfa red, but it sure looks great on this little roadster, don't you think? It's also obvious that this one has always been someone's favorite toy, because, honestly, who's using this to commute to work? You could, but why force it to sit in traffic when it really wants to get out and run? Details like the chin spoiler are in excellent condition and the black rubber spoiler on the deck lid looks fantastic without the usual fading you see on these cars. In fact, all the black rubber parts are in good order and aside from a set of aftermarket fog lamps, it remains entirely as the factory made it.

The lovely tan leather interior is why the Italians are unmatched at auto manufacturing. The aromatic hides are soft and comfortable, defying the car's very affordable price tag. Matching tan inserts on the doors lightens the entire interior, which uses basic black to cover the high-wear surfaces. Full instrumentation is, of course, part of the deal and while that 5-speed shifter might look odd sticking out of the middle of the dash like that, it actually works quite well and feels natural going down the road. Remarkably, this car also has factory A/C that's fully functional as well as a newer AM/FM/CD stereo system in the dash. Plenty of buttons and dials make it feel suitably '80s and there's a snug-fitting black canvas convertible top that's in very good shape indeed. The trunk isn't massive, but it's well-shaped for your gear and nicely finished with more black carpet.

Alfa Romeo's 2.0 liter DOHC four-cylinder engine has proven itself to be robust and reliable over the years, yet still loves to rev with a joyous Italian tenor exhaust note. The engine bay is quite stock and nicely maintained, from the big aluminum intake to the iconic cast aluminum cam cover with ALFA ROMEO proudly emblazoned on its surface. Proper maintenance has given this one a long, healthy life that's only just beginning, and while it's not super fast, it's simply a joy to run this car hard through the gears. The 5-speed manual is delightfully direct and the suspension is competent without being harsh, because this really is a grand tourer more than it is a sports car. Braking is effective and those pretty 5-spoke alloys are reminiscent of Ferrari's rolling stock at the time and they're wrapped in recent Michelin radials.

Affordable Italian sports cars are out there and this is one of the better Spiders we've ever featured. For the money, this car represents a ton of brio for not a lot of lira. Call today! 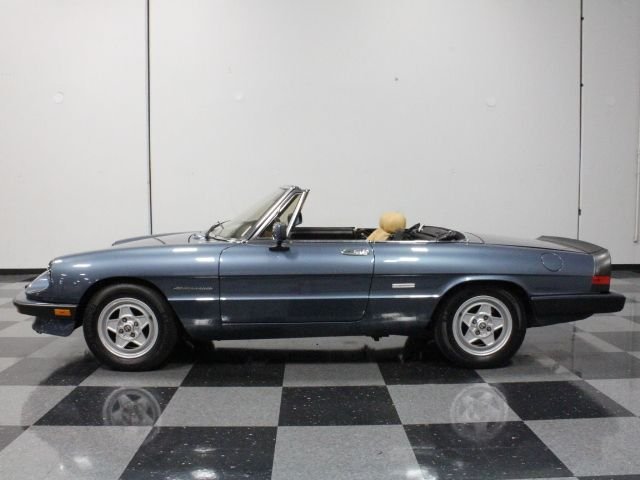