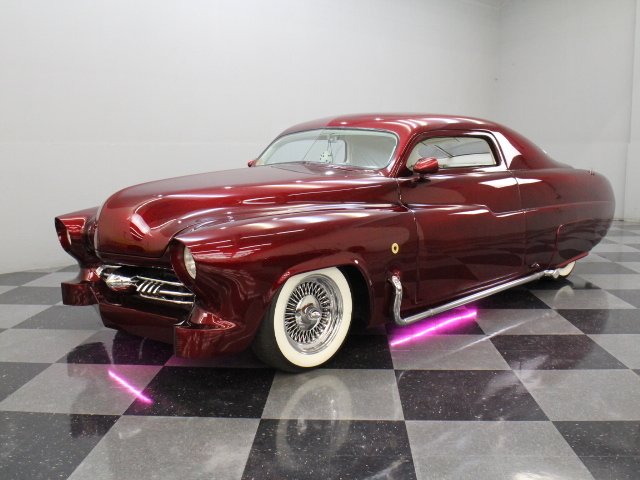 There are customs and then there are customs with history. This stunning 1951 Mercury's radical sheetmetal was created by Hollywood customizing legend Joe Bailon, who is technically credited with inventing Candy Apple (the color, not the sweet-tasting treat). Extensively modified, this Merc is a genuine high-line showstopper that goes beyond the abilities of the average builder, making it something truly special.

The list of modifications on this chopped Merc is obviously extensive, and many of them are unique to this car. The roof chop is fairly common, but this one has had the entire roof reshaped to the point that the rear quarter windows were eliminated entirely. The front end was shaved, frenched, and offers peaked fenders and a custom grille setup that almost looks predatory. In back, the quarters were lengthened nine inches and it took three donor deck lids to create the single curved piece that's on the car today. 1967 Eldorado taillights were grafted into the rear clip and the rear window looks more Buick than Mercury with its three-piece design. The paint is House of Kolor Candy Brandywine that's pretty close to Bailon's original Candy Apple. Lakes pipes were grafted into the front fenders, and really the only way to tell at a glance that this is still a Mercury is by the distinctive side sculpting. That it took more than 10 years to build this car should not come as a surprise.

While the exterior suggests a retro build from the golden era of customs, the interior is full of 21st century tech. Sure, the pleated white buckets and rear bench have a traditional look, and it's quite upscale with the contrasting piping used throughout. A custom center console houses controls for the power windows and Vintage Air A/C system, plus an AM/FM/CD/DVD entertainment system complete with built-in screen. That's a 1958 Chevy Impala instrument panel full of Sun Pro gauges around the original speedometer, all surrounded by a new Grant GT wheel wrapped in white leather. A few subtle pinstriped details adorn the glove box, including Joe Bailon's signature. The trunk is no less spectacular, with more matching pleats, plus stereo equipment neatly stashed behind a transparent bulkhead and a trick storage box designed and built just for this car, the "Candy Prowler."

Fans will be happy to see a Ford powerplant in this Merc, in this case a 351 Windsor. The big roots-type blower up top is a dummy, but sure looks impressive and it's not like you were going to hammer this car down the strip anyway. Lots of chrome and polished aluminum means the show-worthy engine bay is up to the standards set by the rest of the car and it runs superbly. A 3-speed automatic from a '64 Galaxie swaps the gears and the original '51 Mercury suspension, plus air shocks out back, are still doing their thing, albeit with drastically altered ride heights. Dual exhaust with Flowmasters give it the right sound and Wilwood disc brakes have been fitted for safety. Genuine wire wheels with wide whitewall radials are a '60s custom look that's still right today.

History, provenance, and stunning good looks, this is a very rare opportunity to own a famous custom with an impeccable pedigree. Call today! 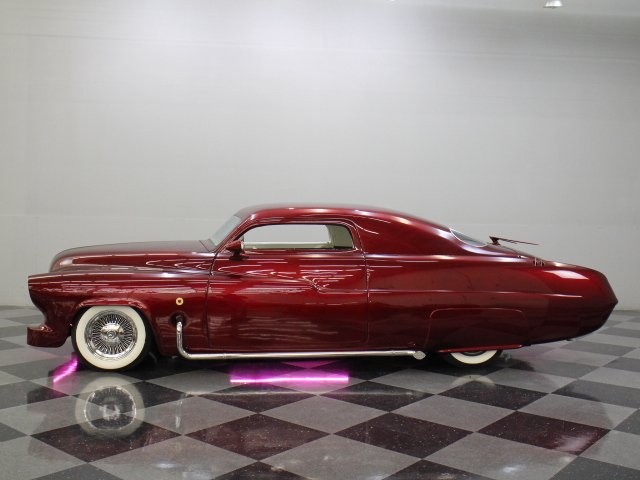